The new iPad Pro, seen here with a Magic Keyboard in the new white colour, will start at RM3,499 in Malaysia for the 11in model and RM4,799 for the 12.9in version with the MiniLED screen. Local availability has yet to be announced. — Apple

The new models come in the same 11in and 12.9in screen sizes as the previous version, and they look nearly identical to the iPad Pro design introduced in 2018. The latest devices include the company’s M1 processor from the Mac that Apple said is far faster than the A12Z chip in the previous iPad Pro launched about a year ago.

The iPad generated US$8.4bil (RM34.59bil) in revenue during Apple’s key holiday quarter of 2020, the most since 2014. Sales jumped on demand from people working and studying at home during the pandemic. The Cupertino, California-based technology giant is betting on these upgrades to maintain interest in the tablet line, which debuted Tuesday as part of Apple’s product event.

The new iPad Pro also includes a MiniLED screen, dubbed by Apple as the Liquid Retina XDR Display, which the company said will enable brighter colours, more details and improved contrast ratios. The new screen, however, is only available on the pricier and larger 12.9in model. Apple will also for the first time offer iPads with fifth-generation, or 5G, wireless connectivity, expanding its 5G portfolio from the iPhone 12 line.

Apple updated the iPad Pro’s camera system, too, with a new 12-megapixel ultra-wide camera on the front and an improved low-light sensor on the back. The company also announced an updated Magic Keyboard that comes in a new white colour.

The new iPad Pros go on sale April 30 and will start at US$799 (RM3,499 in Malaysia) for the 11in model. The 12.9in version with the MiniLED screen will start at US$1,099 (RM4,799 in Malaysia). Models that are 5G-capable will cost extra, and storage tiers will range to as much as 2 terabytes for the first time. Bloomberg News reported on the new iPads last month.

Apple has increasingly used its expertise in custom chip development to give it a leg up on the competition. The company started transitioning its Mac personal computers to its internally-designed processors last year, dropping components from Intel Corp. The M1 chip in the new iPads is the same chip inside of the latest MacBook Air, entry-level MacBook Pro, Mac mini and new iMac.

Apple said the new iPad Pros will include a Thunderbolt connector for the first time, allowing compatibility with additional accessories such as external monitors. This also lets the iPad sync with some external storage drives at faster speeds. While the port is updated, it is the same size as the USB-C connector on the previous iPad Pro. That means users won’t need to buy new chargers. – Bloomberg

Apple goes to battle with Spotify in premium podcast push 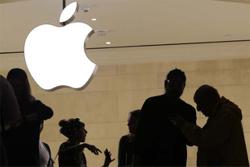