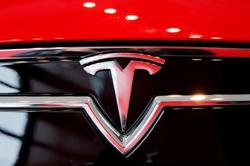 FILE PHOTO: The logo for Coinbase Global Inc, the biggest U.S. cryptocurrency exchange, is displayed on the Nasdaq MarketSite jumbotron and others at Times Square in New York, U.S., April 14, 2021. REUTERS/Shannon Stapleton

LONDON (Reuters) - Cathie Wood's Ark funds bought $246 million worth of Coinbase shares on the cryptocurrency exchange's Nasdaq debut on Wednesday and sold some Tesla shares, according to their daily fund trading summary.

A chunky $168 million of Coinbase shares were added to its flagship ARK Innovation fund, and the remainder went into its next generation and fintech innovation funds.

Coinbase shares were up 11% in U.S. premarket trading on Thursday, after having risen 52% on their debut on Nasdaq, giving it a market capitalisation of close to $100 billion, well above ICE and other traditional exchange operators.

Ark also sold Tesla shares worth about $178 million, though the stock is still by far their biggest bet by weightage on three of their major funds.

The move comes nearly a month after long time Tesla-bull Wood said the electric car maker's share price could reach the $3,000 mark by 2025.

"What's interesting is their unwinding of some Tesla shares after their ludicrous call on Tesla," said Karim Moussalem, head of cash equity sales at Cantor Fitzgerald Europe in London. "Selling some shares after that is a bit odd."

The bet on Coinbase gives Ark more indirect exposure to bitcoin on top of their bets on Tesla, which recently invested in the world's biggest cryptocurrency and said it would accept it as a payment for its cars.

The celebrity fund manager gained prominence last year among retail investors and managed to attract a steady pile of cash into her red-hot funds. The ARK Innovation fund saw assets under management rise from $1.86 billion at the end of 2019 to nearly $22 billion as of March.

"Coinbase listing is a key milestone that arguably has created a lot of interest and hype, so it will be interesting to see how the entire cryptocurrency industry evolves over the coming months," said Steen Jakobsen, chief investment officer at Saxo Bank.