Bezos gets fraction of legal fees from girlfriend’s brother A US judge has said the defamation lawsuit did not require ‘seven partners and 11 associates’, implying it was total overkill on Bezos’ part. — Reuters

Jeff Bezos wanted US$1.7mil (RM6.92mil) in legal fees from his girlfriend’s brother for successfully fighting off his defamation lawsuit. He got much less.

A Los Angeles judge awarded the world’s richest man US$218,385 (RM889,700), saying Amazon.com’s founder needlessly put too many lawyers on the case.

Even though the defamation fight was more complicated than usual, more than 2,070 hours billed in the case were “not reasonable”, Los Angeles County Superior Court Judge John Doyle said in a ruling on Friday.

“This was not a matter that required seven partners and 11 associates,” Doyle said.

Bezos’s attorneys didn’t immediately respond to a request for comment.

Michael Sanchez, brother of Bezos’s girlfriend Lauren Sanchez, sued the billionaire and his security consultant, Gavin de Becker, last year claiming they defamed him by telling journalists that Michael had been the source of nude photos of Bezos that were leaked to the National Enquirer. The case was thrown out because Michael Sanchez’s only evidence was that he had heard that from journalists.

“When Mr. Bezos filed his motion for US$1.7 million in attorney’s fees, we discussed how grotesque the request was, on many levels,” Michael Sanchez’s lawyer Tom Warren said in an email. “Today, the court resoundingly rejected his request.” – Bloomberg 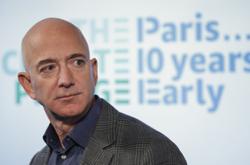