Trains, with a history in the country stretching back to British colonial times, continue to advance with new technology.

Likewise, railway enthusiasts continue to grow alongside the industry, attracting new fans and ideas on how to keep the hobby of train watching interesting.

Mechanical engineering student Wong Kai Xian said he stumbled into the fandom when his videos of trains caught the eyes of other local fans.

“My first video was uploaded in 2017. It was about a new train being tested for the KLIA Ekspres that I happened to film. I wasn’t expecting a huge number of subscribers, as I just wanted to share it among friends.

“Slowly people started to like my videos and suggested that I film more. As a train enthusiast I know I needed to share my knowledge about trains with others, so I started to film more and more,” said the 19-year-old. His channel WKX 076 has netted over 1.3 million views. Wong got a chance to sit in the train cab of the KLIA Ekspres during the launch of several new models. — WONG KAI XIAN

He said there are various online groups and communities such as the Malayan Railway Fan Club (MRFC) which follows Keretapi Tanah Melayu Bhd (KTMB) trains, and Malaysia Land Public Transport Fans (MLPTF) which focusses on both trains and buses.

Those enthusiastic about trains and public transport are known by various names such as railfans, trainspotters and train otaku. Magazines dedicated to the hobby like Trains and Railfan Japan have been in publication since the 1940s and 60s, respectively.

While more popular in countries that use rail transport extensively like Britain, Japan and the United States, Malaysia has its share of railfans with sites like Landasan and the Rail Travel blog sharing interesting info about local trains.

Johor’s Sultan Ibrahim Ibni Almarhum Sultan Iskandar, who made it into the Malaysia Book Of Records as the first Ruler to obtain a locomotive driving licence back in 2010, is the hobbyists’ favourite high profile persona.

Wong said catching the Blue Tiger was a rare experience but with trainspotting everyone has a chance to experience it via videos and photos. 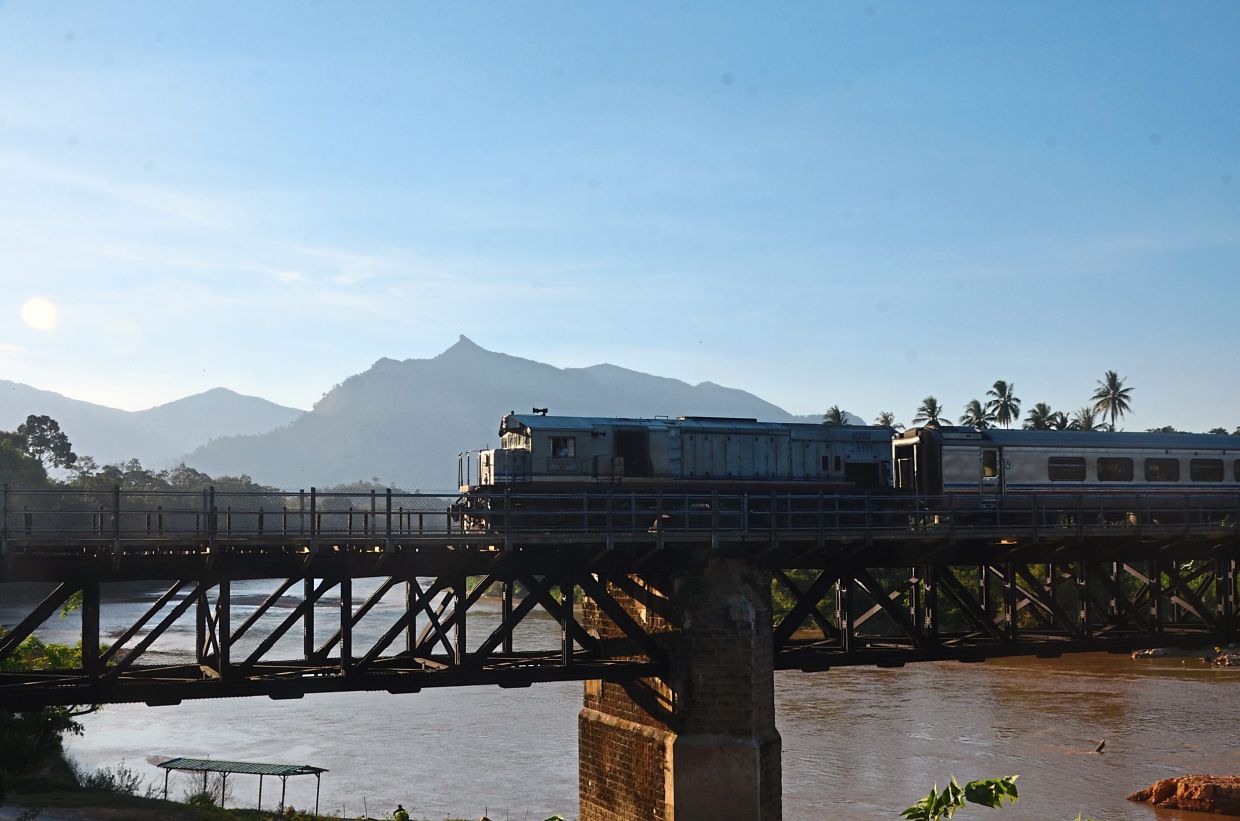 The historic KTMB No 57 locomotive is a sought-after sight. — AMEER DANIAL

“The Internet has improved my hobby, as insider info is generally circulated only in the community. For example, if a member spots a cargo train, they’ll inform the group because its schedule is not made public and the cargo train doesn’t always run according to schedule,” he explained.

Even passenger trains with timetables publicly available online are subject to delays, which is why it’s always helpful to be part of a community as members will alert each other, he added.

Fellow train fan and mechanical engineering student Kwok Yew Kheng said the most sought out information are tips and tricks for spotting rare or old models.

“A great way to reach out to people is by joining the many Facebook groups out there. Just don’t be shy to ask questions. You can meet many spotters and enthusiasts alike.

“Some are friendly about sharing while others are a little reluctant unless you get to know them better,” he said.

Kwok, who only got into the hobby a few years ago, said he is a greenhorn compared with veterans who’ve been at it for more than 20 years. 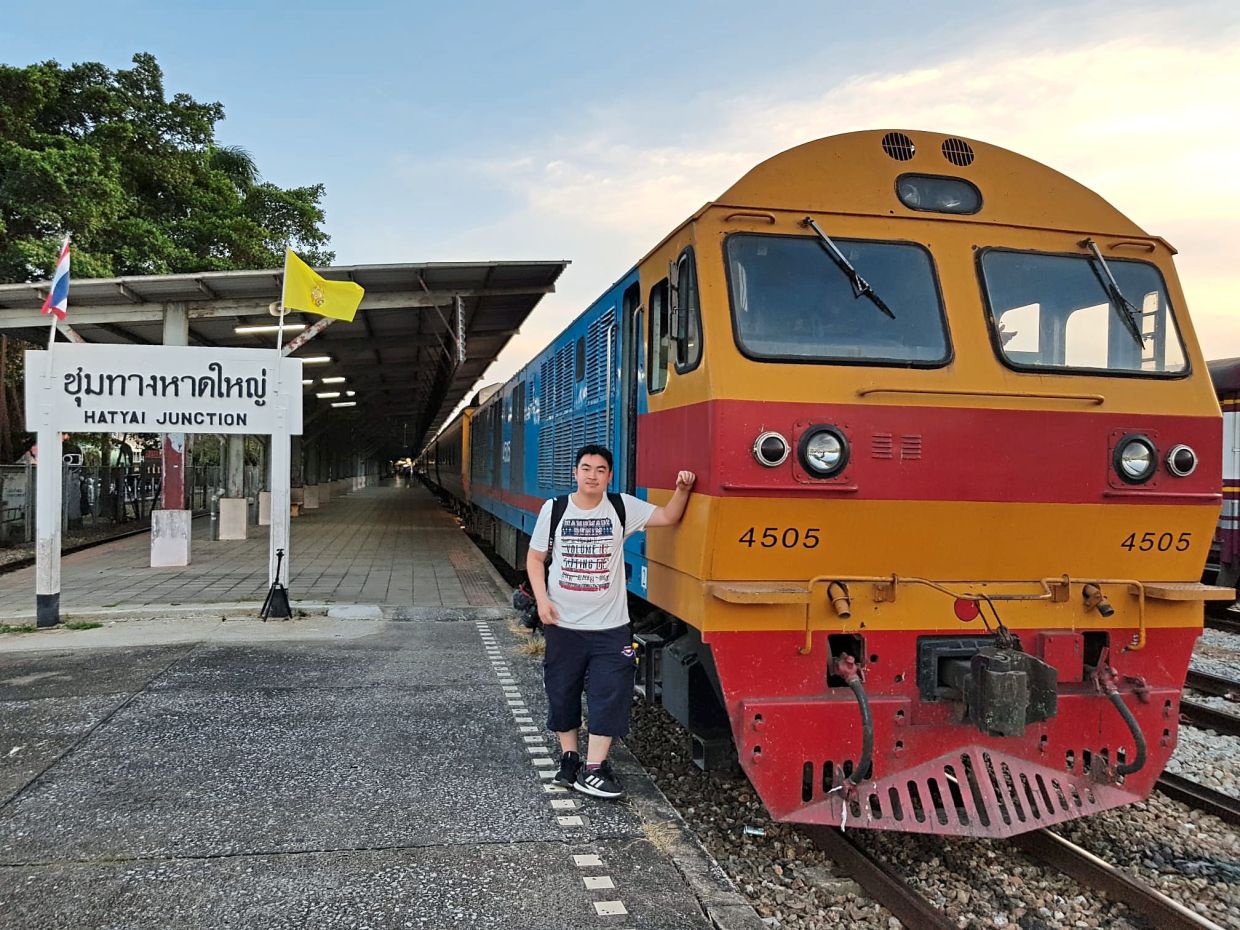 The 21-year-old said his keen interest in shooting photos – he was the school photographer in secondary school – and love for engineering made this hobby perfect for him, as he also likes to read about the latest train technologies.

Both Kwok and Wong use a mirrorless camera for video and still shots, with their smartphones as backup.

Kwok prefers taking photos as he likes to capture trains in higher resolution while Wong favours videos as he feels they offer a more complete experience with audio.

Wong recommended using wide-angle lenses for videos and zoom lenses for stills, as this allows a photographer to start shooting even before the train enters the station.

“I prefer to use a compact camera, as it’s easy to carry and does not attract attention. The auxiliary police would sometimes question me if I was holding a rather large DSLR.

“The information boards at the stations don’t prohibit anyone from carrying cameras. Everyone should be free to take pictures and videos,” said Kwok.

However, whether trainspotting solo or in a group, he has been stopped by the authorities six out of 10 times, and sometimes told to leave.

“In many cases I will be asked why I am taking the photos and if I am making a commercial,” he said.

To avoid this, especially when on group trips, hobbyists are advised to write a letter in advance to the train operator for permission, he said.

For impromptu trainspotting, he advised railfans to take photos quickly and avoid lingering for too long to avoid suspicion. He also warned against arguing with the authorities. 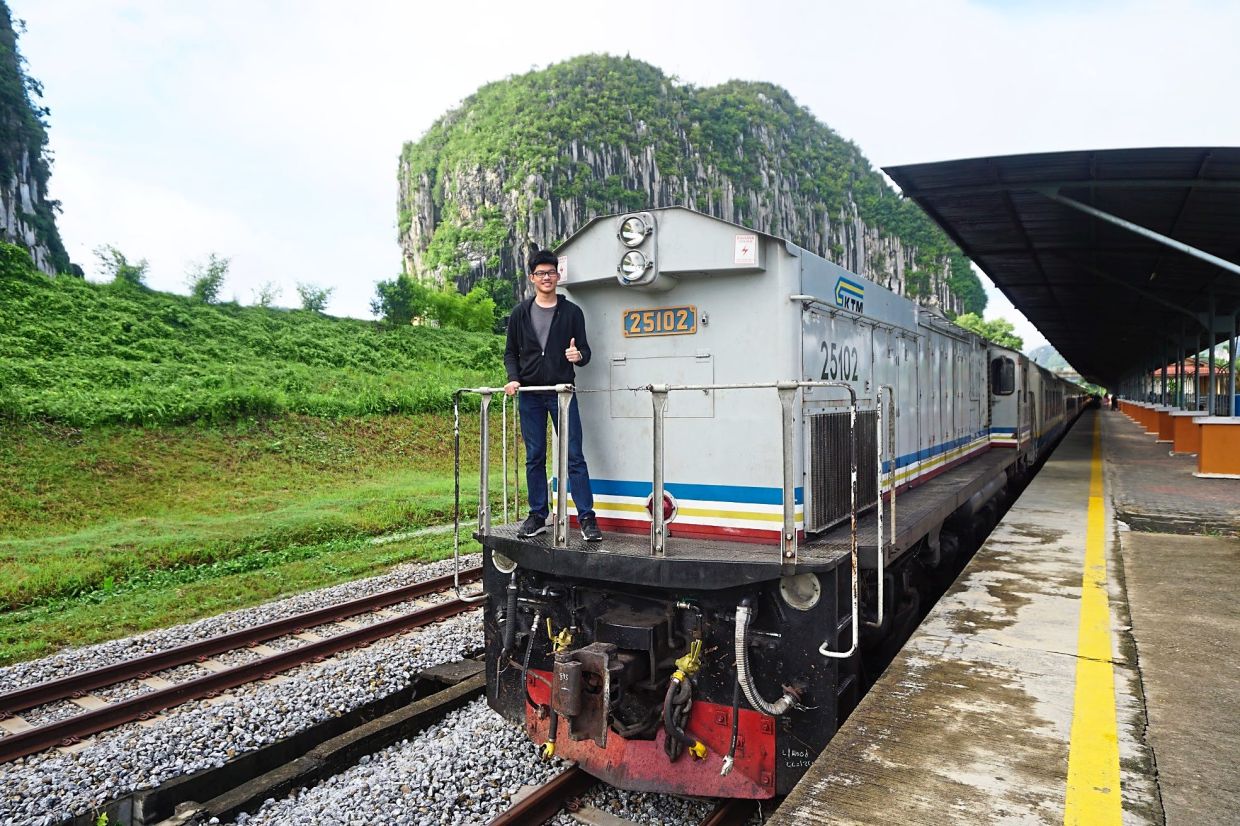 A Prasarana Malaysia Bhd spokesman confirmed that the company doesn’t generally prohibit the public from taking photos or videos, as long as they are meant for personal use and the activities don’t inconvenience other passengers.

Shooting for commercial activities requires a permit from its Event and Partnership Department, he said.

Prasarana owns and operates the country’s urban public transportation services, including the LRT and MRT networks, as well as the KL Monorail. It also manages stage bus services in Kuala Lumpur, Selangor, Penang, Perak and Pahang.

“For groups of enthusiasts, or if one needs a long time to complete a project like sketching trains which may take several hours, we recommend getting in touch with us so that we can inform the officers at the station and the auxiliary police. This is for everyone’s safety,” he said.

The spokesman said fans and public transport users are encouraged to get in touch with operators to share their thoughts about the services or give suggestions for improvements.

“We always reiterate that ours is a guardian role – we run the services on behalf of the rakyat – so it belongs to all of us and everyone is encouraged to offer their two cents’ worth,” he said.

The company’s dialogue with railfans resulted in various ideas which Prasarana is now mulling over, including creating a travel playlist for the LRT, and producing and selling vehicle-related special edition merchandise.

In October last year, the fans were given a tour of Prasarana’s Bus Control Centre, central workshop and Bus Academy in Cheras Selatan, where all the bus captains are trained. They had the rare chance of trying out the bus simulator used for training.

The spokesman revealed that some of its employees are also members of public transportation fan clubs, adding that it’s not uncommon for those in transportation companies to love the industry professionally and privately.

Locomotive engineer Ameer Danial said his love for trains has been a generational affair, as his father also worked for a train company.

“My father worked at KTMB’s Gua Musang station (in Kelantan) where I would see all sorts of locomotives and coaches passing by.

“I was drawn to them as each locomotive made a different sound, and beyond the train itself, I was also interested in how everything worked, from signalling systems to the tokens used by KTMB,” he recalled. 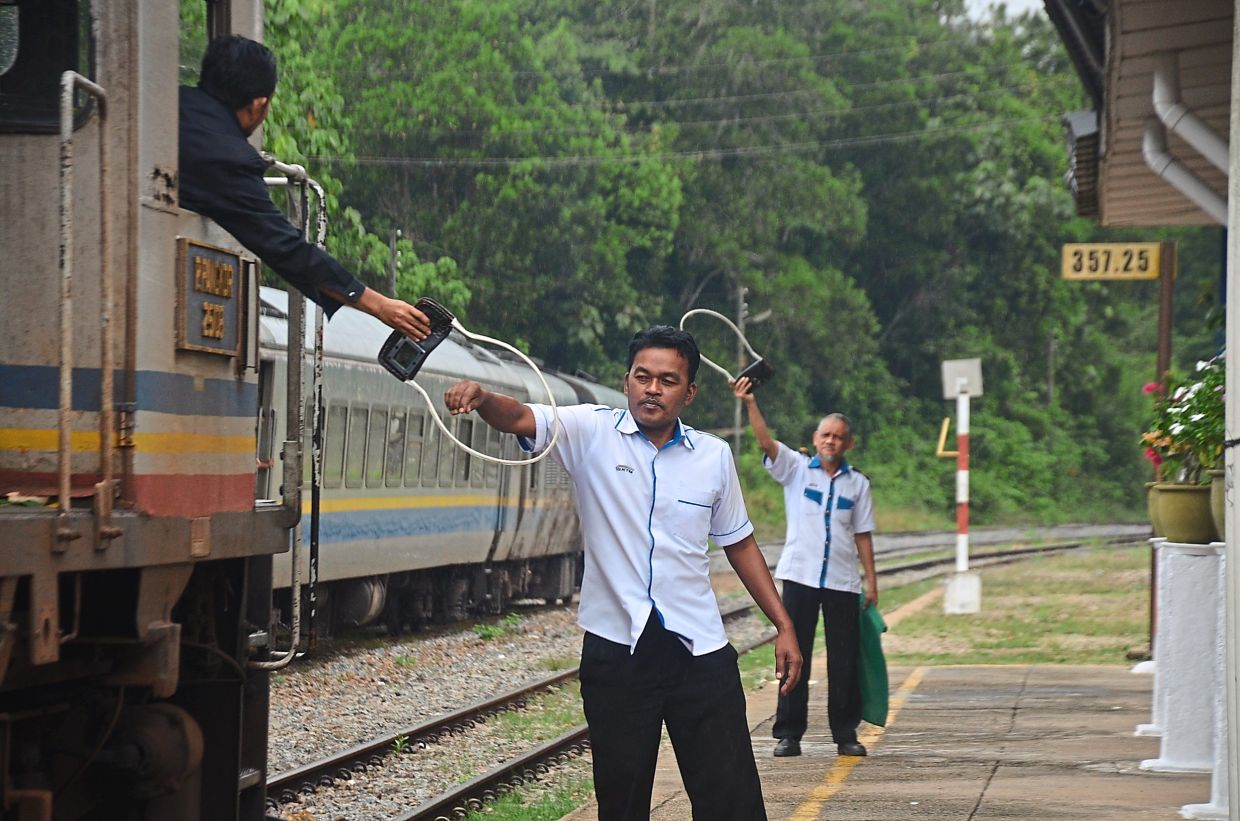 A train driver passes a bag containing a token that’s required to enter the next station, an old school system that’s still used at the East Coast rail from Gemas to Tumpat. — AMEER DANIAL

The 27-year-old discovered the rail fan community a decade ago through the Malaysian Railway Fan Club.

He said back then it was a simple forum on its own site, made up of fans from Malaysia and Singapore.

He started becoming an active member after joining a trip organised by the club in 2012 and is now an admin of its Facebook group.

Ameer said before the movement control order (MCO), the club often organised road trips to visit old stations to capture panoramas of train tracks which have yet to be modernised like the Gemas-Johor Bahru stretch.

The club, which focusses on the older lines run by KTMB, also worked with operators to organise visits to train maintenance depots to expand its members’ know-how about train operations.

“This hobby is special in how it attracts fans from Malaysia and abroad, with the club being a platform for us to share our opinions and thoughts about the rail transport industry.

“Many retired railwaymen tend to be nostalgic and recall how trains used to be the primary form of transportation for Malaysians,” he said, adding that it’s always a joy to listen to such stories.

Singaporean Ng Eu Gene, who is a public transport officer in the city state, said he came upon the MRFC Facebook page by chance while researching the lost railways of Malaysia.

“It all started as I was curious about the criss-crossing tracks at Kempas Baru station in Johor. The curiosity grew into a quest to understand how railways work,” he said.

The 27-year-old has fond memories of trains back from his kindergarten days when he used to balik kampung on the Senandung Malam overnight train with his parents for the festive period.

Ng viewed transporting as a full-time hobby, spending most of his time researching and joining group tours when his schedule permits.

Now a member of several WhatsApp and Facebook groups, he noted that the majority of the members are middle-aged or older but youths have started joining the club in recent years.

“There is a mix of both public transport workers, railwaymen and those working in other industries. I work in the public transport industry and am proud to be part of a team that keeps the world moving every day,” he said.

Senior members who have worked in the industry are a boon to the club, said Kwok, as they can answer questions that even Google can’t.

He said it was great that anyone could now reach out to a “train guru” on social media when they have an obscure query, allowing everyone to enjoy the hobby without barriers.

Kwok and other train fans want to take the hobby forward by creating a website that would allow the public to view trains using virtual reality headsets, as the tech would allow people to appreciate trains better.

“We plan to compile as much information as possible and share it out via the upcoming website,” he said.

Digital World board members get subpoena over Trump's social media deal
Amid electric vehicle boom, US seeks to flood ‘charging deserts’
Online disinformation stokes tensions as Kenya elections near
Opinion: Do you unplug during vacations?
As China shuts out world, Internet access from abroad gets harder too
Keen to avoid losing money to scammers? Here’s what you can do
Jury finds US cable company must pay millions in damages after employee’s murder of female customer
Toshiba shareholders to endorse director nominees as buyout expectations grow
US school officials say cellphones play a big role in student fights. Can districts regulate phones?
Google faces antitrust complaint by Danish job-search rival