A review by The Seattle Times found that Amazon approved for participation in its affiliate marketing programs an adherent of the ‘Boogaloo Bois’, who advocate overthrow of the US government. — Dreamstime/TNS

YouTuber Joseph Mauricio, who goes by Prepper Action, has garnered 9,560 subscribers by posting videos of himself explaining knife-carry laws, modifying handguns and training with a California private militia alongside people wearing patches of the far-right Three Percenters group.

But the top video on his YouTube channel is different: An advertisement for his affiliate marketing page on Amazon.com.

“Hey, it’s Prepper Action,” the voice on the 2020 video says, over an image of a person in a skull mask carrying an assault rifle. “And do I have survival gear for you – on my newly created Amazon storefront.”

Mauricio, who did not respond to questions for this story, isn’t directly selling any items, and doesn’t operate a store on Amazon. Rather, his “storefront”, an Amazon affiliate marketing programme, is a curated selection of links to products he recommends – for instance, a bowie knife for which he filmed a video review against a backdrop of the Gadsden flag, flown by many in the attack last month on the US Capitol. Each time a customer purchases a product through Prepper Action’s Amazon page, Mauricio earns a small commission.

On this low-profile corner of Amazon’s expansive online retailscape, militant preppers, pro-gun provocateurs and election-fraud conspiracy theorists are turning a buck on the back of their beliefs.

A review by The Seattle Times found that Amazon approved for participation in its affiliate marketing programmes an adherent of the “Boogaloo Bois”, who advocate overthrow of the US government; a supporter of the obsessive, cultlike QAnon movement; a forum for assault rifle enthusiasts whose users have doxxed and harassed gun-control advocates; and more than one dozen other similar websites touting far-right conspiracy theories.

There is no publicly accessible database of Amazon affiliate marketers, and a company spokesperson declined to release details on the scope of its affiliate marketing programs, making it difficult to know how many far-right groups are making money on Amazon.

Many of the personalities The Times identified have been penalised by social-media platforms. YouTube has banned users promoting gun sales from earning advertising dollars. After the Jan 6 US Capitol insurrection, Facebook and Twitter took action against some of those same sites for promoting election-fraud conspiracy theories.

Facebook has repeatedly flagged Mauricio’s posts as containing false or partially false information, including a post in which the California resident repeated a false claim tied to QAnon, implying top Democrats are paedophiles. Mauricio deleted his Twitter account last month in protest over “censorship”.

After the Capitol riot, Amazon, too, moved against some proponents and merchandisers of right-wing ideologies on its platform. Amazon Web Services (AWS) booted Parler off its cloud-computing servers after the social-media network’s users took part in the Capitol riot, saying Parler lacked an effective strategy to moderate posts advocating violence. Amazon disallowed the Oath Keepers and Three Percenters militias from raising money via its Amazon Smile programme for nonprofits. And Amazon began scrubbing QAnon-related products from its online mall last month after some in the US Capitol mob were seen sporting QAnon insignia.

“We invest significant time and resources to ensure our operating agreement guidelines are followed, and remove associates that violate our guidelines,” an Amazon spokesperson said in a statement, adding that Amazon does “not endorse the content or views” of its affiliate marketers.

Amazon had not ended its partnerships with any of the sites identified by The Seattle Times as of Friday, three weeks after The Times alerted Amazon to their existence, raising questions as to how the company decides which of its partners to penalise.

“If (Amazon is) going to kick Parler off AWS, how do they justify having all these other threat actors monetising via these web stores?” said Danny Rogers, the co-founder of the Global Disinformation Index, which tracks funding for conservative hate groups.

Amazon, he said, has previously been reluctant to break ties with promoters of right-wing conspiracy theories.

Associates receive personalised links to products they can place on their websites or embed in social-media posts. The practice is widespread: Anyone who has bought something off Amazon on the recommendation of sites like Wirecutter and This Is Why I’m Broke has likely clicked on an Associate affiliate link.

Under “Guns and Gear Deals” on assault-rifle forum AR15.com, for instance, is an affiliate link to a rifle sight sold by Amazon. Each time a customer buys the rifle sight after clicking on the link, AR15.com earns a small commission – between 1% to 10% of the purchase price, depending on the product category, according to Amazon’s commission schedule.

Amazon, meanwhile, earns many times that amount. The company keeps an average of 30% of each sale on its platform, according to the Institute for Local Self-Reliance.

AR15.com’s site registrar, GoDaddy, terminated its contract on Jan 11, saying AR15.com “both promotes and encourages violence”. AR15.com has since transferred its domain name to Sammamish-based hosting service Epik, which also partners with far-right sites Parler and Gab. Amazon declined to comment on its partnership with AR15.com.

At one point in the early 2000s, affiliate links drove nearly 10% of the traffic to Amazon.com, according to an early AWS employee who helped build cloud-computing tools for Associates.

“These people were popular – they were able to attract a following and a readership and convert that to income by planting affiliate links,” said marketing consultant Neal Schaffer.

Now, though, affiliate marketing “is not nearly as relevant as it was a decade ago”, Schaffer said. That’s, in part, because by the late 2010s, much blogging activity had migrated to Instagram, which allows users to post only one working link, in their bio section.

Enter Amazon’s Influencer programme. Launched in 2017 with product selections curated by online personalities like The Deal Guy’s Matt Granite, whose YouTube channel has more than one million subscribers, Influencers group merchandise they recommend onto a single, personalised Amazon.com page, called a storefront. Importantly for Instagram, storefronts are accessible via a single link.

Only people with a “meaningful social media following” are allowed to be Amazon Influencers, the company says. An Amazon spokesperson declined to specify the minimum number of followers required to become an Amazon Influencer, how Influencer applications are reviewed or how many people are responsible for examining Influencers’ social media presence.

For most, Amazon storefronts provide only a modest income stream, according to three Influencers with between 8,500 and 111,000 social media followers who said they earn less than US$50 each month via affiliate links.

Amazon affiliate marketing is likely a side hustle even for the most successful social media personalities, Schaffer said. Anyone who’s doing well with affiliate links, he said, is “probably making more money on banner ads and sponsored content”.

Many far-right vloggers with Amazon storefronts are also sponsored by brands like Sportsman, Cabela’s, Blackout Coffee and Olight Gun Lights, a review of their channels shows.

Whether affiliate marketing is lucrative for those who undertake it shouldn’t necessarily factor into Amazon’s decisions on how much to investigate its partners, Rogers said.

“The policy response of Amazon should not be coupled to how successful these storefronts are,” he said. “If there’s not much money, why the hesitancy to take more decisive action?”

The intangible value of an Amazon storefront, in terms of the standing it immediately bestows on social-media personalities who are seen as linked to one of the nation’s largest and most-trusted brands, can be more important than the storefront’s cash earnings, said Elana Pruitt, who runs a vegan lifestyle Instagram page with nearly 8,900 followers.

Having an Amazon storefront “does add to the credibility of my personal brand”, she said. “There’s a spot I can point people to... tell people where to find nut milks.”

Not everyone with an Amazon storefront, though, has such an anodyne presence on social media.

YouTuber Liberty Doll, a South Carolina-based gun-rights advocate with more than 200,000 subscribers, links to her Amazon storefront under every video. Until recently, shoppers could find there a list of camping supplies labeled “Prepping/Boog Gear”, a reference to the violent anti-government movement that predicts an oncoming “boogaloo”, or race war.

Liberty Doll did not respond to requests for comment. After The Seattle Times notified Amazon of its intent to publish this story, boogaloo references vanished from Liberty Doll’s storefront.

Shoppers visiting the Amazon storefront of The Gun Collective – which has more than 275,000 subscribers to its YouTube channel, where its most popular video is about the legalities around evading assault weapons regulations – can find knives, gun-themed kitsch and Hillary Clinton toilet paper.

Days after supporters of former President Donald Trump overran the US Capitol in an attempt to stop the certification of Joe Biden’s presidential election win, Liberty Doll and The Gun Collective separately filmed segments with another gun-rights YouTuber, Jared Yanis, who said he had been in the mob at the Capitol. In those videos, Yanis reiterated false claims that the election had been fraudulent and that antifa activists were responsible for the mayhem in Washington, D.C.

Yanis later told reporters that he did not breach the building and did not condone the actions of those who did, though he reposted a Facebook post saying US Capitol Police should “do themselves a favour and go home”.

Yanis, a Shirley, Massachusetts, police officer who has amassed 516,000 followers on his Guns & Gadgets YouTube channel, also had an Amazon Influencer storefront at one point. The storefront was inactive as of mid-January. Yanis and The Gun Collective did not respond to questions.

Other platforms have booted off or restricted many of the militant preppers and conspiracy theorists linked by The Seattle Times to Amazon Influencer storefronts and Amazon Associates tags.

Gun-rights YouTubers Prepper Ralph and John Rourke have said they have faced sanctions from the video platform, but maintain Amazon storefronts. A Dutch Trump supporter whose Twitter account was suspended still has an Amazon storefront with a section for “QAnon products”.

California conspiracy theorist Mark Dice’s false claims of election fraud led YouTube and Facebook to hide his pages behind content warnings. In a mid-January video contesting the results of the presidential election broadcast to his 1.65 million YouTube subscribers, Dice compared the Capitol riot to last summer’s protests over police brutality and racial inequity.

“By BLM standards, it would be what you call a ‘mostly peaceful’ protest,” he said sarcastically. “Really the most peaceful we’ve seen over the last year.” Under the video are affiliate links to Amazon listings for his books “Hollywood Propaganda”, “The True Story of Fake News” and “The Liberal Media Industrial Complex”, as well as a link to his Amazon storefront.

Dice said Friday he “forgot I even had (an Amazon storefront) until you mentioned it”. He provided a screenshot showing he earned US$44.95 (RM181.71) from Amazon affiliate links so far this month. Then he accused The Seattle Times of “tirelessly trying to undermine the principles of free speech”. – The Seattle Times/Tribune News Service

After US Capitol riot, a call to protect veterans from disinformation

Checked by reality, some QAnon supporters seek a way out 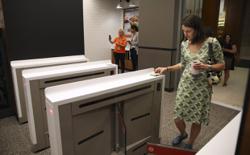