German companies ranging from language app Babbel to dating platform ParshipMeet are considering listings on the country’s stock exchange, according to people familiar with the matter.

They are among a growing list of German companies, which also includes a prosthetic limb maker and a car-parts dealer, weighing initial public offerings in Frankfurt as businesses across Europe rush to take advantage of rising valuations and stock prices.

Berlin-based startup Lesson Nine GmbH, which operates the subscription-based language and e-learning platform Babbel, has invited advisers to pitch for roles on a possible IPO, the people said, asking not to be identified discussing confidential information. The company has seen a surge in user numbers during the coronavirus crises, as nationwide lockdowns force adults and children to take up education online.

Meanwhile ParshipMeet’s owner, the broadcaster ProSiebenSat.1 Media SE, is working with advisers on a potential IPO of the business, the people said. ProSiebenSat.1 has been encouraged by the successful listing of dating app Bumble Inc. in the US this month.

Companies have already raised US$2.6bil (RM10.50bil) in IPOs on German exchanges this year, according to data compiled by Bloomberg, putting the country on course for its second-best opening quarter for listings in more than a decade. While volumes so far have been driven by the 1.8bil-euro (RM8.89bil) IPO of used-car dealer Auto1 Group SE, a host of other companies could add to the tally in the near term.

Among them is Ottobock SE & Co., a manufacturer and supplier of prosthetic limbs, which is exploring a listing that could come as soon as this year, people familiar with the matter said. Online consumer lending platform Smava GmbH is also considering an IPO for later this year or early 2022, while the online car-parts dealer Autodoc GmbH has been speaking to banks about advisory roles on a possible float, the people said.

A representative for Ottobock declined to comment. Representatives for Autodoc and Smava didn’t immediately respond to requests for comment.

Potentially the biggest listing in Germany this year could come from Vodafone Group Plc, which is considering raising about 4bil euros (RM19.58bil) from an IPO of its European towers unit in Frankfurt, Bloomberg News has reported. Other German groups mulling similar moves are online eyewear retailer Mister Spex and Volkswagen AG, which is exploring a listing of its Porsche sports-car unit, people familiar with the matter said previously. – Bloomberg

Qualtrics files for US IPO two years after sale to SAP 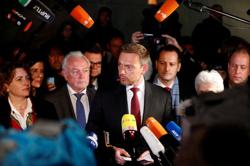