Nuqta manager Rayan said parents of young girls that accompanied them to get an idea of the place very quickly felt reassured after visiting. — AFP

For those needing space to do business in Libya, a country beset by frequent blackouts and internet cuts after a decade of war, co-working has become increasingly popular.

Overcoming both restrictions to stem the coronavirus pandemic and the conflicts that have riven the oil-rich North African nation since the 2011 uprising that ousted long-time dictator Moamer Kadhafi, shared workspaces are booming especially in the capital Tripoli.

More than half of Libya's nearly seven million people live in Tripoli, where electricity, internet and water cuts can last several hours, crippling those trying to do business in the Mediterranean port city.

But co-working space managers have come up with solutions, providing those needing to connect online with everything from backup electricity generators and solar panels to power inverters.

Some have even set themselves up as internet service providers.

The new shared work spaces also provide their often young clients with a place not just to plug in their laptops, but also to network with like-minded people.

"People come for our services," said Youssef al-Rayan, manager of the Nuqta co-working space, which opened in 2017. "But also because they feel good here."

The three-storey building is on a busy commercial street in the heart of bustling Tripoli, but step inside its sleek glass facade, and it offers peace from the honking horns and noisy traffic.

"Welcome to your space," a banner at the entrance reads.

"I don't see myself locked in an office all day. Working from 8am to 3pm does not necessarily guarantee a return," said 23-year-old web designer Mohamad al-Mahjoub.

"I am much more productive working when and where I want."

Some work on the terrace overlooking the street, sipping coffees — ordered online — from cafes.

"All I need is a very strong internet connection, electricity, air conditioning in the summer, and a cool place to meet with other young people," Mahjoub added.

Some centres organise workshops and "hackathons" — competitions between web developers — sometimes funded by companies, or organisations such as the United Nations.

"We have created a community of freelancers," said Rayan. "It provides a link between investors and the creators of businesses."

Libya's conflict has had a big impact on the business community.

Following Kadhafi's ouster in the 2011 NATO-backed uprising, an array of militias and rival administrations have filled the power vacuum, fighting to impose their authority.

But a fragile ceasefire between the two main sides agreed last October has largely held, and a transitional body has been put in place to prepare for December elections.

The co-working spaces had to close when eastern strongman Khalifa Haftar in April 2019 launched an aborted offensive to seize Tripoli, seat of the UN-recognised Government of National Accord.

"It was difficult to know where the missiles and shells were going to fall," Rayan said.

Some people, like 24-year-old medical student Madiha al-Amari, were forced to flee their homes as fighting raged on the outskirts of the capital for almost a year.

"We were physically safe, but I needed to stay in touch with the world I knew and, without power or internet at my relative's place, this (co-working space) became a safe haven for me," she said.

"I don't want to flunk my exams after a whole semester of hard work because I don't have electricity or a good internet connection at home."

The work spaces are not for everyone, because costs are prohibitive for many.

"Prices may not be cheap for some... but I believe it's worth every penny," Amari added.

For others, it is a way to escape crowded cafes where there is "too much noise, too much smoke and too many men," said Manara al-Alem, who works online.

For parents worried that their daughters could be harassed, the spaces offer safety.

"The parents of young girls accompanied them to get an idea of the place," said Nuqta manager Rayan. "Very quickly, they felt reassured."

He also noted that co-working spaces comply with Covid-19 preventive measures for Libyans working online in a country that has recorded more than 128,000 cases of coronavirus including over 2,000 deaths.

Staff and clients say they agree that being at Nuqta is like being in "a small family". – AFP 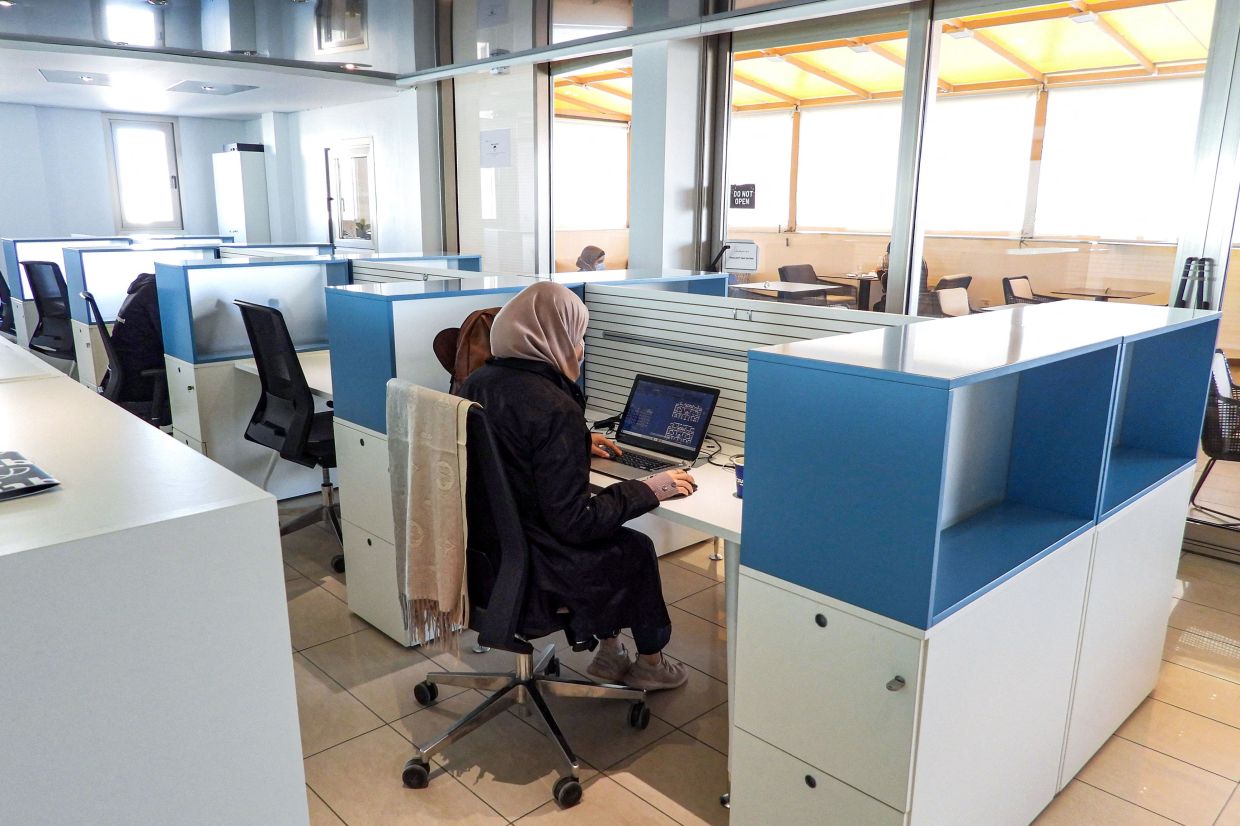 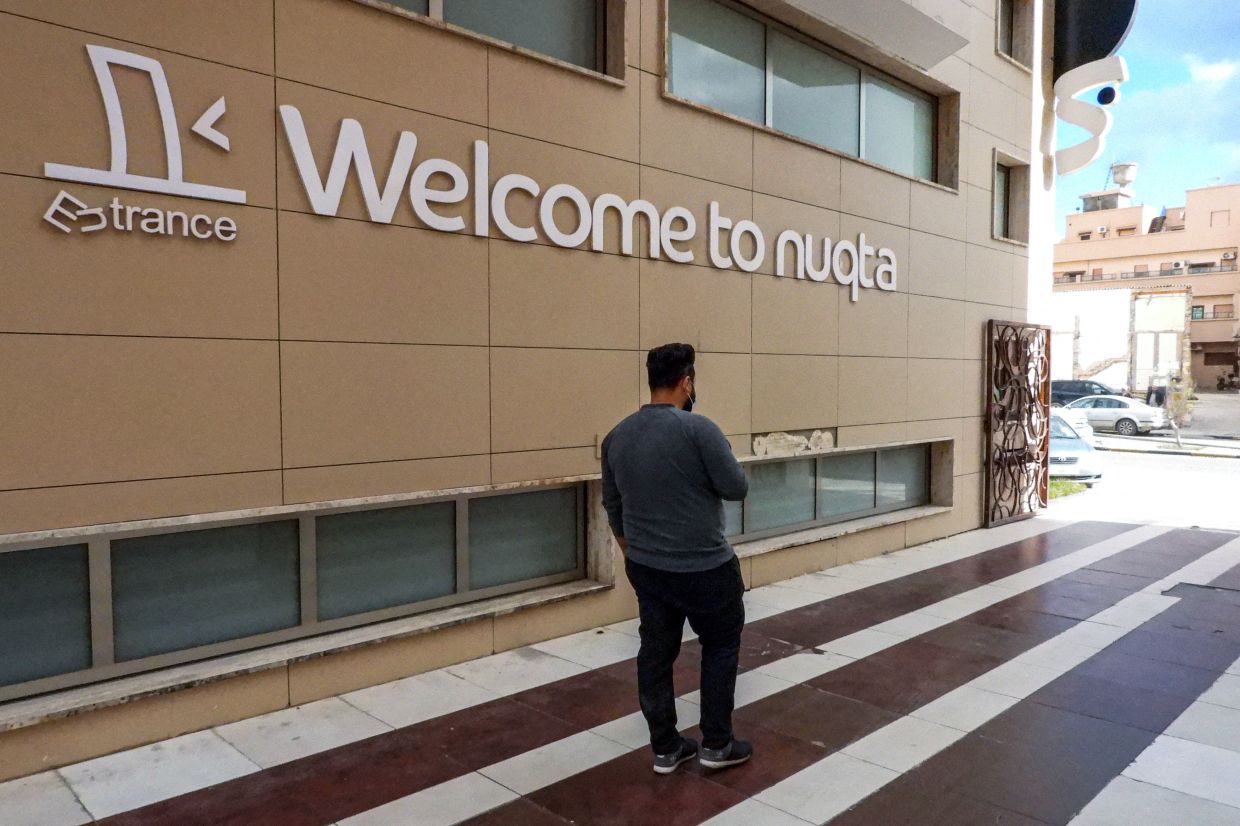 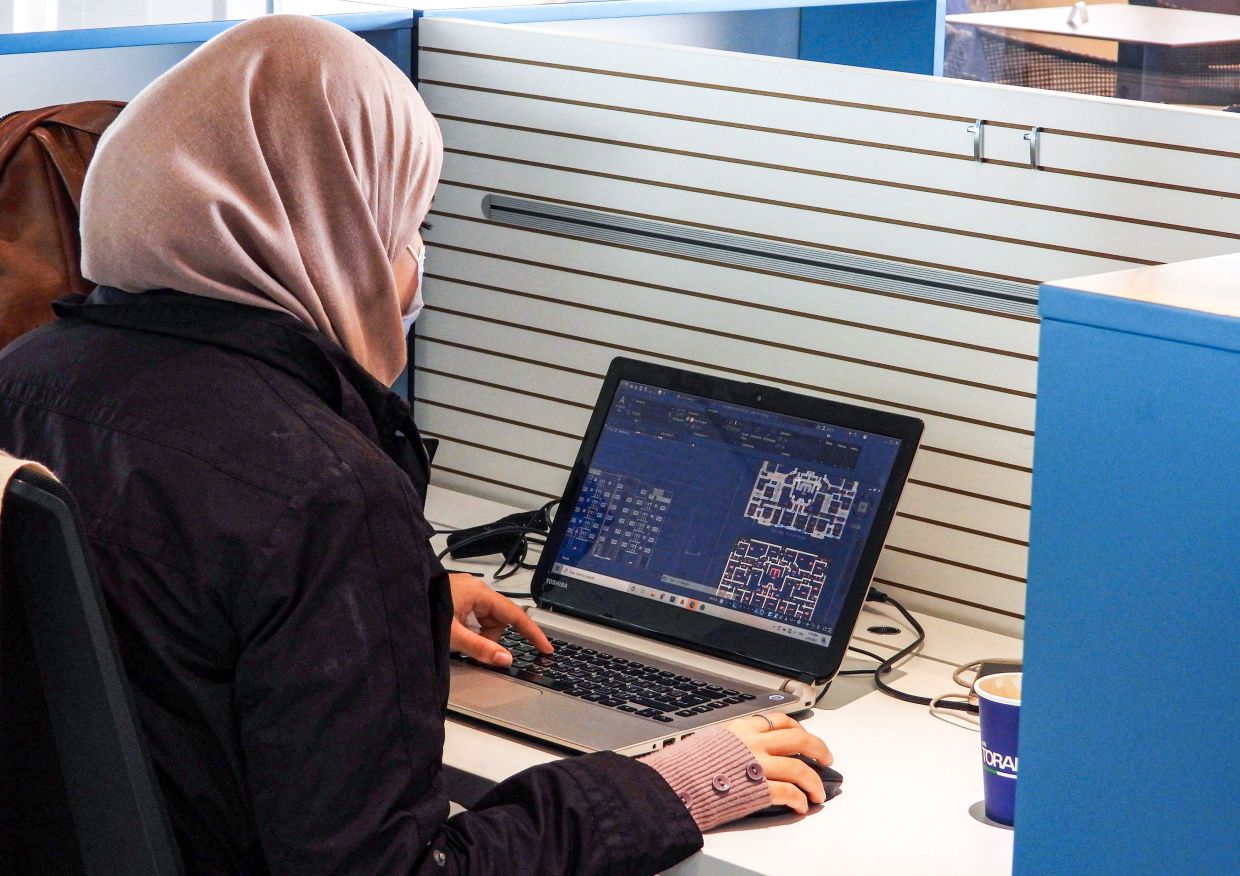 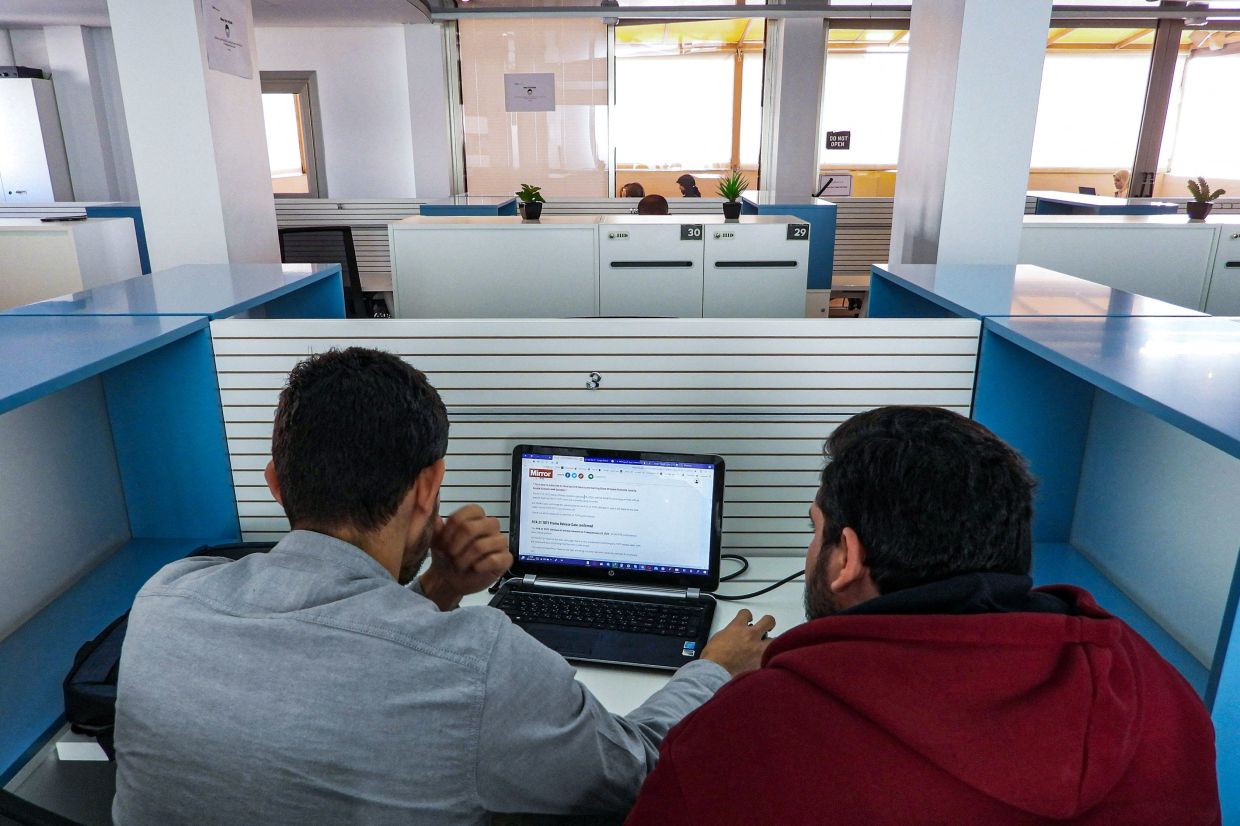 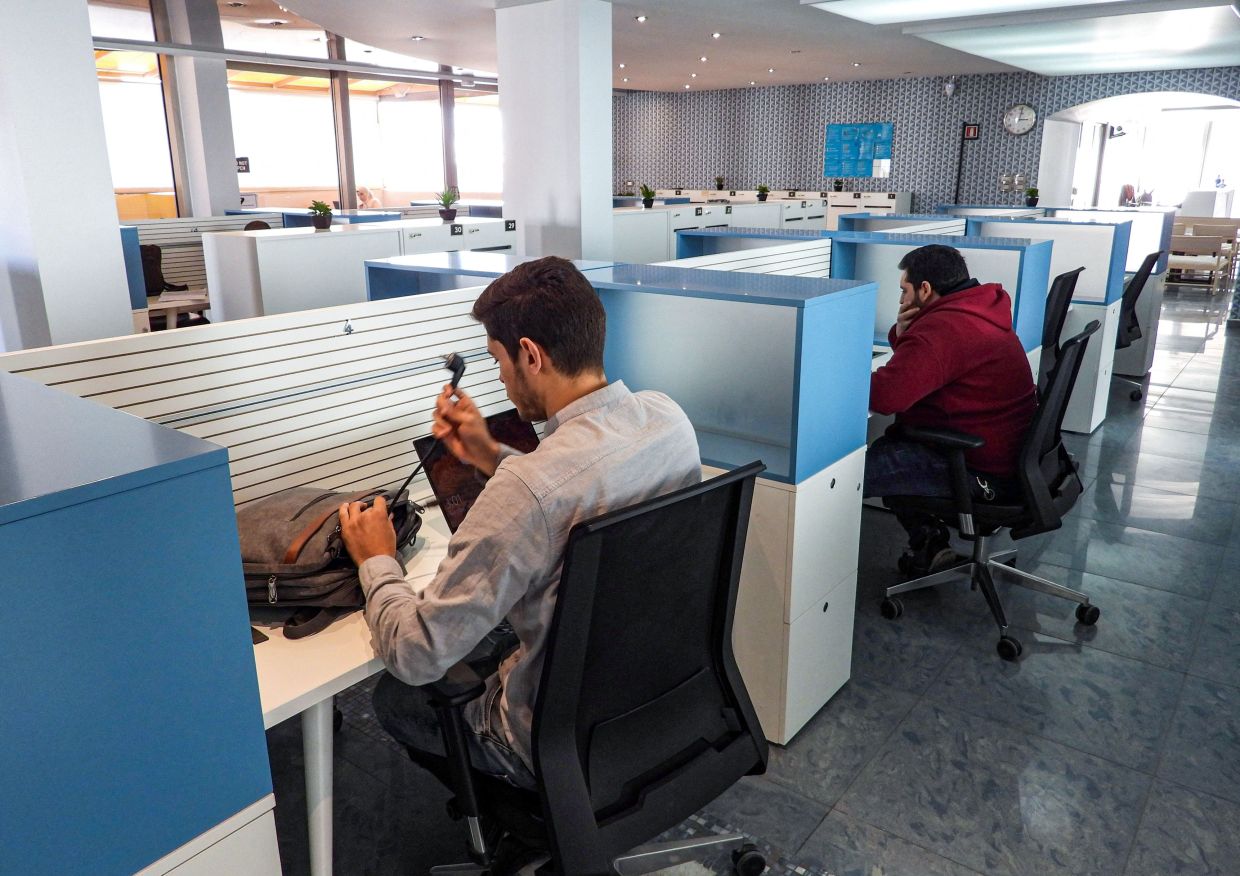 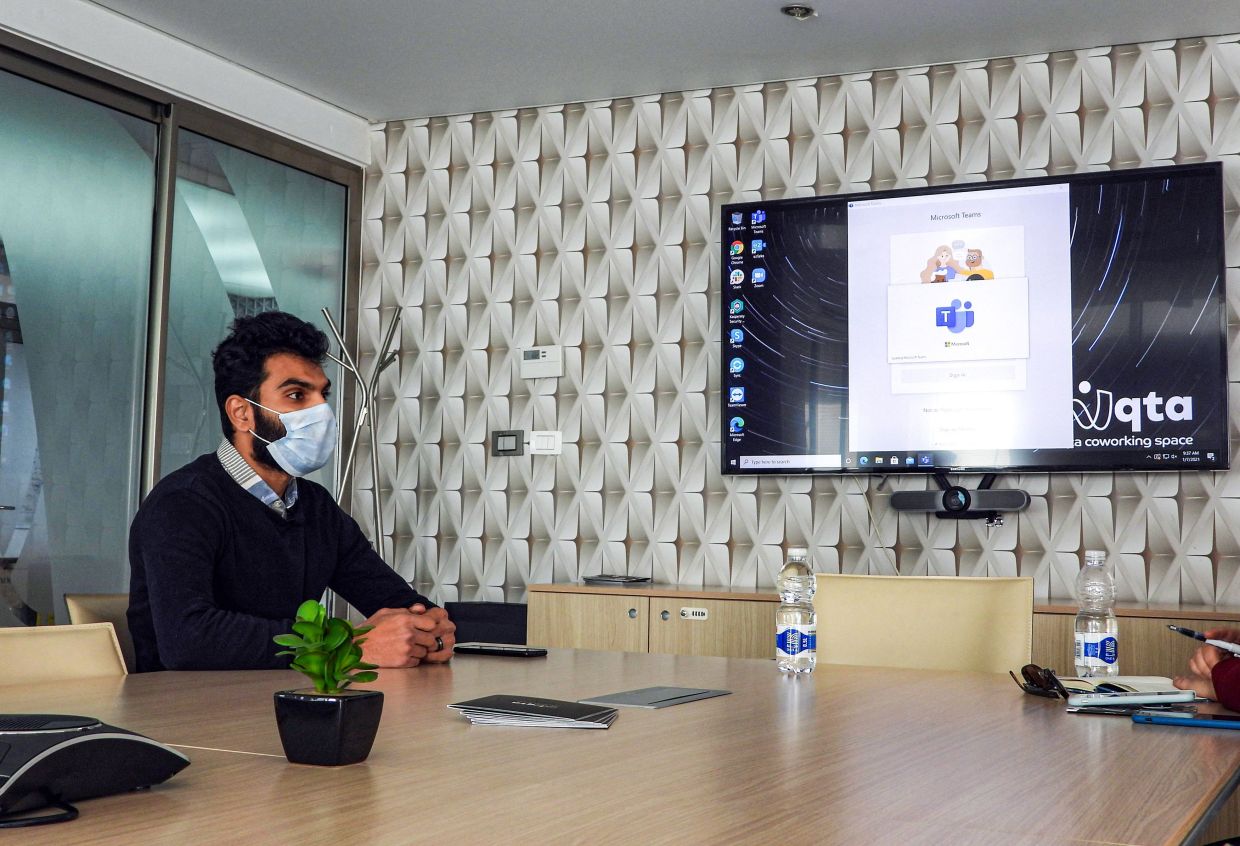 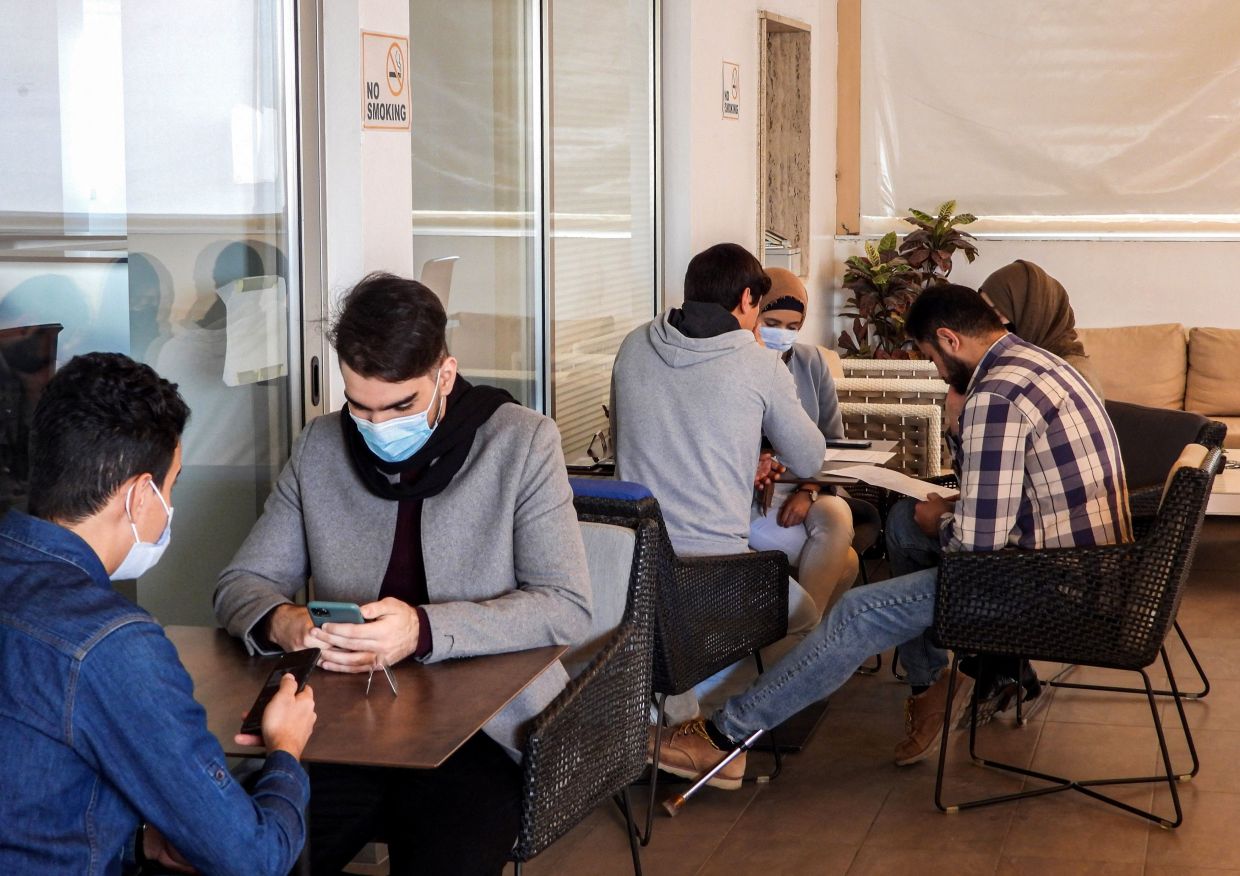 Nuqta manager Rayan said parents of young girls that accompanied them to get an idea of the place very quickly felt reassured after visiting. — AFP

Co-working spaces like Nuqta have become popular for small businesses in the Mediterranean port city, which were previously crippled by unstable electricity and internet. — AFP

A woman sits in a half-cubicle as she works at the NuqtaFor parents worried that their daughters could be harassed, the spaces offer safety. — AFP

Two men share a half-cubicle as they work at the Nuqta coworking space, which ensures they can connect online thanks to backup electricity generators and solar panels to power inverters. — AFP

People sit in half-cubicles as they work at the Nuqta coworking space, which provides workstations, meeting rooms, and a cafeteria for small businesses. — AFP

Coworking space are an attractive proposition for entrepreneurs in Tripoli, where electricity, internet and water cuts can last several hours. — AFP

Nuqta manager Youssef al-Rayan says people come to the co-working space for the service, and also because they feel good here. — AFP

People sitting together in a meeting at the Nuqta coworking space, which provides workstations, meeting rooms, and a cafeteria for small businesses and entrepreneurs in Libya's capital of Tripoli — AFP