Bukit Aman: No reports of gov’t websites being hacked so far 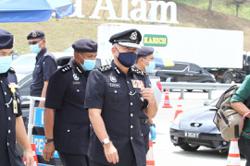 Police said they have yet to receive any reports of government websites being hacked following the threat made by the ‘hacktivist’ group calling themselves Anonymous Malaysia. — Bloomberg

KUALA LUMPUR: The police have yet to receive reports of government websites being hacked following the threat made by hacker activist group ‘Anonymous Malaysia’.

He said if the hack was done with the intention of sabotaging the national security system, investigations would be carried out in accordance with Sections 124K of the Penal Code which provides for life imprisonment and Section 124L which provides for a jail sentence of up to 15 years.

“If there is a police report regarding such activities (hacking), investigations can also be carried out under Section 4 or Section 5 of the Computer Crimes Act 1997 which provides for a fine not exceeding RM150,000, or imprisonment not exceeding 10 years, or both,” he told Bernama here.

Anonymous Malaysia made the threat via a video that went viral on social media platforms recently.

Among the allegations made in the 55-second video was that Malaysia’s security system was at a low-level, which could allow the information to be easily leaked and sold by unscrupulous hackers.

Zainuddin also called on the public to support and cooperate with the authorities by coming forward with information on the hacking activities.

“The problem of data leaks and hacking of government systems is not something that can be made fun of, because it has an impact on the people and the country. Let us all work together to ensure the security and well-being of this country,” he said.