K-pop fans leaping to Biden’s defence by essentially hijacking the right-wing-leaning “#ImpeachBidenNow” hashtag – instead filling it with photos and videos of K-pop artistes and mocking anti-Trump comments – might have unwittingly violated Twitter’s rules. — AP

LOS ANGELES: From Donald Trump’s lifetime ban to Elon Musk’s comments about the coronavirus, the rules and policies that govern Twitter have been a subject of extensive discussion and analysis in recent months.

The topic flared up again last week, when K-pop fans essentially hijacked the right-wing-leaning “#ImpeachBidenNow” hashtag, filling it with photos and videos of K-pop artistes and mocking anti-Trump comments, repeating a tactic that they used last spring with the “#WhiteLivesMatter” hashtag.

But does such activity violate Twitter’s rules and policies? Multiple Twitter users claim their accounts were suspended after participating in the hashtag-takeover, according to several individuals who contacted Variety and many others on social media. “Have you heard from any Twitter users who have been suspended as a result of using K-pop memes to jam up racist/fascist hashtags?,” one reader asked Variety. “Happened to me today and I can’t get any confirmation but suspect it was a result of tweeting a K-pop meme to counter the ‘impeach’ hashtag.”

After conversations with people familiar with the situation, the answer is: It’s complicated.

While a spokesperson for Twitter was unable to address individual cases, they pointed to this section of the company’s rules and policies, which seems to indicate that although participating in such activity is not itself a violation, the individuals may have violated other policies while doing so.

Before getting into the weeds, it must be emphasised that Twitter is a private company that is free to regulate its content as it wishes (and is arguably given that right by the First Amendment of the US Constitution). However, founder Jack Dorsey and other company representatives have spoken at length about the rights they say their users should have, and many of the company’s voluminous rules and policies seem to exist because of previous lengthy discussions about those rights or violations.

The company’s rules and policies are dense, complex and anchored in words that are open to interpretation; the more they attempt to define a situation, the more complicated they become.

The gateway to what seems to be the most over-arching rule regarding the hashtag takeover issue is located in one sentence in the “Platform manipulation and spam policy” section of Twitter’s rules and policies, which defines platform manipulation as “using Twitter to engage in bulk, aggressive, or deceptive activity that misleads others and/or disrupts their experience”.

The sentence reads: “You can’t artificially amplify or disrupt conversations through the use of multiple accounts or by coordinating with others to violate the Twitter Rules,” with the key words being “coordinating” and “artificially”. (Both of which, of course, are open to interpretation and can vary from situation to situation.)

Relevant examples cited in that section include “inauthentic engagements that attempt to make accounts or content appear more popular or active than they are; coordinated activity that attempts to artificially influence conversations through the use of multiple accounts, fake accounts, automation and/or scripting; and coordinated harmful activity that encourages or promotes behavior which violates the Twitter Rules”.

While many of the examples cited focus on a single user creating multiple accounts, the main issue affecting many of the people whose accounts were suspended seems to lie in the “coordination” section: Users are forbidden from “coordinating with or compensating others to engage in artificial engagement or amplification, even if the people involved use only one account”. Hijacking a hashtag would seem to fall under that categorisation, although why some users would be suspended while others are not is less clear, unless there is an online history showing that a user led a coordination effort (such tweets are not publicly visible from suspended accounts).

Looking at the “Hashtags” section, users are forbidden from “using a trending or popular hashtag with an intent to subvert or manipulate a conversation” – which would also seem to make the hashtag takeovers a violation, although again, why some users would be suspended while others are not is less clear.

Even so, it could conceivably be argued that in this case, the users were using Twitter “as a parody, commentary, or fan account”, which is actually the first example in the “What is not a violation of this policy?” section.

The penalties for such violations are also open to debate: The “What happens if you violate this policy?” section leads with the statement, “The consequences for violating this policy depend on the severity of the violation as well as any previous history of violations,” although a source familiar with Twitter’s rules stressed to Variety that in order to be suspended, a user would have to have violated the rules multiple times or in a very severe manner.

And although this seems like an extremely complex conversation to have over a group of fans cluttering up a hashtag, as the past four years show, Twitter is an extremely loud and influential amplifier, with rules and policies that are tested and challenged thousands of times a day. – Variety/Reuters 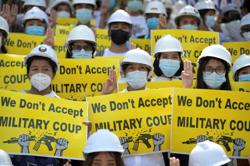