Bitcoin’s surge to a record of almost US$42,000 (RM169,785) on Jan 8 embodied the embrace of risk in financial markets awash with stimulus. — Reuters

Bitcoin steadied after earlier slumping below US$30,000 (RM121,275) on Friday in a retreat that stoked fresh questions about the sustainability of the cryptocurrency boom.

The digital coin traded around US$32,000 (RM121,275) just hours after sliding as much as 7.7% to about US$28,818 (RM116,496) in Asia in its latest bout of volatility. Commentators have cautioned that a sustained drop below US$30,000 (RM121,275) could presage further losses. The largest cryptocurrency is on course for one of its worst weeks since the pandemic roiled financial markets in March last year.

Bitcoin’s surge to a record of almost US$42,000 (RM169,785) on Jan 8 embodied the embrace of risk in financial markets awash with stimulus. Some argue Bitcoin is also becoming a more mainstream investment with a role to play in hedging risks such as dollar weakness and faster inflation. Others see little more than speculative mania since the digital coin has more than tripled in the past year.

Pinpointing who is mainly responsible for the Bitcoin rally is one of the many crypto mysteries – Bitcoin funds, momentum chasers, billionaires, day traders, companies and even institutional investors have been cited.

For instance, Grayscale Investments, which is behind a popular Bitcoin trust, saw total inflows of more than US$3bil (RM12.12bil) across its products in the fourth quarter. This week, BlackRock Inc dipped its toe into the crypto universe for the first time, saying cash-settled Bitcoin futures are among assets that two funds were permitted to buy.

Recent comments by Janet Yellen may be among the reasons for this week’s Bitcoin swoon, said Jehan Chu, managing partner with blockchain advisory firm Kenetic Capital in Hong Kong. In her Senate confirmation hearing, Yellen noted cryptocurrency as an area of concern for terrorist and criminal financing.

Describing such fears as “unfounded”, Chu said a “natural correction” is underway and that profit taking won’t “reverse the unprecedented assimilation of Bitcoin into Wall Street’s DNA, leading to US$100,000 (RM404,250) levels this year”.

“Over the past few days, Bitcoin has been trading approximately 30% lower than the most recent all-time highs, and we’ve seen Asia take profits in Bitcoin in the lead-up to Chinese New Year,” said Fernando Martinez, head of Americas with crypto brokerage OSL. The next key level is US$27,750 (RM112,179) – if Bitcoin falls through that it could retest US$25,800 (RM104,296), he said. 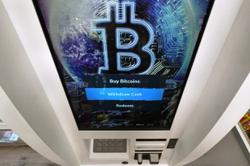