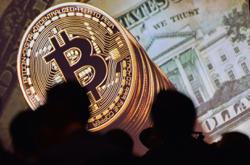 FILE PHOTO: A representation of virtual currency Bitcoin is seen in front of a stock graph in this illustration taken November 19, 2020. REUTERS/Dado Ruvic/File Photo

LONDON (Reuters) - A long position on bitcoin overtook "long tech" as the trade fund managers said was the most crowded in January, Bank of America's monthly fund manager survey showed on Tuesday.

For the first time since October, a long position on technology companies was knocked off the top spot, as investors said that long bitcoin was the most crowded trade. A short position on the U.S. dollar was seen as the third most crowded.

A steeper yield curve was expected by a record 83% of investors - that's more than after the 2008 Lehman Brothers collapse, the 2013 U.S. Federal Reserve's "Taper Tantrum" or after the 2016 U.S. election. The expectation of higher bond yields was at or close to all-time highs.

The top tail risks to the economy were thought to be problems with the vaccine rollout (30%), the Fed easing its asset purchases (29%), and a Wall Street bubble (18%).