Drone-crowded skies get a step closer with US safety rules

A drone carries a UPS package on Children's Island off the coast of Beverly, Massachusetts, US during UPS’ demonstration of a drone making a commercial delivery of a package to a remote or difficult-to-access location. The FAA is establishing four tiers of drones capable of flying over people. — Reuters

Commercial drone use for deliveries and services cleared a major hurdle in the US with new rules allowing the devices to fly over populated areas for the first time and requirements for tracking them to address safety and security concerns.

All but the smallest drones will have to broadcast a radio signal with a digital license plate and a flight location under new Federal Aviation Administration regulations, the agency said in a news release. Details of the move were earlier reported by Bloomberg News.

A separate new regulation creates a blueprint for protecting people and moving motor vehicles on the ground from errant drones and allows routine flights at night, the FAA said.

“The new rules make way for the further integration of drones into our airspace by addressing safety and security concerns,” FAA Administrator Steve Dickson said in the release. “They get us closer to the day when we will more routinely see drone operations such as the delivery of packages.”

The dual actions are the most significant regulatory expansion in drone capabilities since the devices first trickled into civilian markets starting about a decade ago.

The rules will be “an essential building block toward safely allowing more complex” drone operations, the agency said in a document summarising the action.

The announcement breaks a regulatory roadblock that had held up growth in pilotless aircraft technology in the US. Requiring an ID broadcast addresses concerns from federal law enforcement and homeland security agencies that the increasingly capable flying machines would be used for crime and terrorism.

Several years ago the FAA had been set to expand drone flights over crowds, but the other agencies wouldn’t permit it to move ahead until it addressed growing concerns about misuse of the devices.

It will still be years before swarms of drones operated by companies such as Amazon.com Inc’s Prime Air, Alphabet Inc offshoot Wing and United Parcel Service Inc buzz over neighbourhoods dropping off packages. But the new rules provide an important platform for the industry to move toward those goals.

The FAA is establishing four tiers of drones capable of flying over people. They range from lightweight devices with no exposed propellers that won’t harm people to sophisticated craft that obtain the same FAA approvals for reliability as traditional aircraft.

Even small drones exempt from broadcasting their identity will have to do so if they operate over crowds, the agency said. The FAA will also require licensed drone pilots to pass a knowledge test on flying after dark.

A robust drone tracking system is needed to ensure the public accepts expanded commercial operations, UPS Flight Forward said in comments on the proposal earlier this year. “If illegal and unsafe operators cannot be identified and stopped, confidence in the system will be eroded and voluntary compliance will be undermined,” the company wrote.

Drones weighing more than 0.55 pounds (0.25 kilogrammes) must broadcast their identity on a low-power radio frequency such as WiFi or Bluetooth within 30 months of the rule’s finalisation. In that way, police or other authorities can monitor nearby drones.

Civilian drones offered for sale in the US must be equipped with such technology within 18 months, according to the summary. Operators aren’t permitted to take off without a working ID beacon.

The regulations also allow for existing drones to be retrofitted with such a system.

The rule doesn’t require that the devices broadcast on a signal that can be transmitted by mobile phone systems to a national tracking network, a measure that was originally included in a proposal unveiled last year.

Wing, Amazon and others seeking to create delivery businesses had urged the FAA to allow for such an Internet-based national network to track the devices.

Hobbyists who fly the devices can seek exemptions allowing them to operate without an ID beacon, so long as they’re flown in restricted areas approved by the FAA. Flying clubs such as the Academy of Model Aeronautics and educational institutions can apply for such exemptions.

The FAA, heeding requests from recreational users and industry groups, is adding privacy restrictions that will make it impossible for the public to identify the operator of a drone using the ID beacon.

The FAA will keep that information confidential, it said in the summary, providing it to law enforcement and national security agencies if asked. That’s a departure from traditional aviation where FAA’s flight-tracking data is typically public.

The new rules are an attempt to address the explosion of drone use. The FAA had registered almost one million recreational drone users and they owned 1.3 million of the devices as of last year. An additional 385,000 commercial drones had been registered with the agency, according to its data.

At the same time, there’s been a surge of reports of the devices flying dangerously near traditional planes and helicopters – even Air Force One – and cases of them being used for drug smuggling or terrorist attacks in other nations. The National Transportation Safety Board has concluded drones were involved in several US midair collisions.

Because the regulations were seen as helpful for the industry, the rough concept had wide support. However, the FAA’s proposal for ID beacons issued a year ago drew more than 53,000 public comments as various constituents duelled over how it should be implemented.

Traditional hobbyists who for decades have flown model aircraft, some of which don’t have the electronics to support a radio beacon, said by the thousands that they were concerned the rules would be too restrictive.

More recent recreational users flying small copters said they were worried about retrofitting their aircraft or adding costly new requirements. Many also raised privacy concerns about how the tracking information could be used. – Bloomberg

Thai-built drones for agriculture offered for sale to farmers 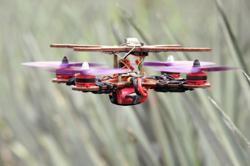