Sellers use livestreaming to sell everything from bags of sweet potatoes to Cartier jewellery during annual Chinese shopping festival, the largest of its kind. Livestreaming e-commerce sees a burst of activity this year after getting a boost from the Covid-19 pandemic. — SCMP

Livestreaming e-commerce has finally stepped into the spotlight this year during China’s Singles’ Day, the world’s largest shopping festival that takes place annually on Nov 11. Consumers have been increasingly turning to live streaming to see demonstrations of products during the Covid-19 pandemic, which limited shoppers’ ability to check out products in person.

In one livestreaming channel during the festival, a man selling chopping knives showed himself sharpening the cutlery in what looks like an old blacksmith workshop. In another channel, a young woman displaying a clothing line changed outfits on camera, briefly appearing in her underwear before her virtual audience.

Unique personalities and visuals are just some of the aids used to draw in livestreamers and get them to part with their hard-earned money. But the rapid rise in the popularity of the medium has meant that there are not enough hosts to hawk everything that needs hawking.

“There is a huge shortage of anchors and livestreaming talents in China in general right now,” said Ashley Dudarenok, founder of the social media agency Alarice and marketing training company ChoZan.

However, this did not stop livestreaming from becoming a pivotal channel this Singles’ Day as hosts peddled everything from bags of sweet potatoes to 190mil yuan (US$28.3mil or RM118.53mil) Cartier necklaces.

When Alibaba, the parent company of the South China Morning Post, kicked off presales for its platforms on Oct 21, Taobao Live saw transactions hit US$7.5bil (RM30.97bil) in the first 30 minutes. The﻿ platform said the livestreaming sales reflected a 400% increase from a year ago.

Keeping shoppers glued to their screens requires a lot of creativity. Stay-at-home shoppers now look to livestreaming for both product recommendations and entertainment, increasing the pressure for hosts to find new ways to draw in viewers. 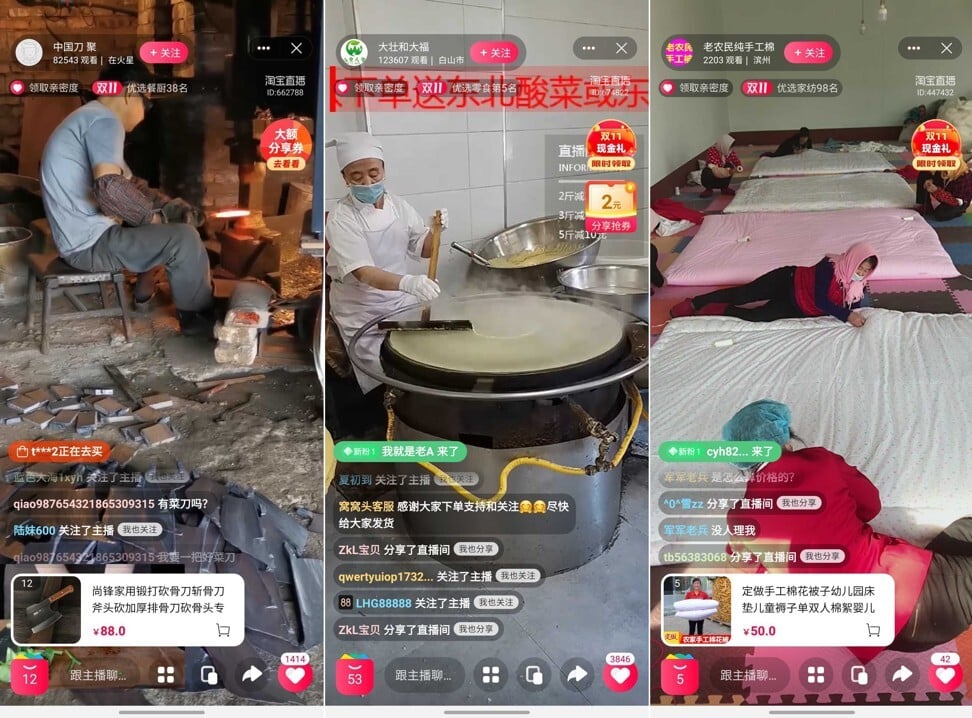 In one livestreaming channel, an elderly woman made gigantic pancakes for hours to showcase her company’s cornflour. Another channel just focused the camera on a large room where women quietly sewed quilts.

Other hosts have sought more hi-tech solutions for virtually connecting with shoppers this year. A refrigerator seller named Rongshen hosted a virtual 3D room that allowed viewers to get a feeling for how a refrigerator would actually look by using a 360-degree view of a kitchen. And Pico, a company that makes virtual reality headsets, showed its Neo 2 headset by livestreaming from a VR video game.

But despite its continued popularity, livestreaming e-commerce has been plagued by fraudulent claims and counterfeit goods. This led some hosts to turn to various antics to try to put shoppers’ minds at ease.

People tuning in to a Taobao Live stream for bunk beds might have wound up watching 20 men standing on a bed to test its strength. In a channel selling pearls, hosts cracked oysters open on camera to try to show they were not selling cheap plastic imitations. One sure way to avoid scams is buying directly from a brand’s official store. Cartier showed its jewellery on Taobao for the first time this year. Flight attendants from Hainan Airlines also promoted flexible flight packages on the travel booking app Fliggy, another platform owned by Alibaba. Within two hours, the number of people who had bought travel packages was enough to fill 100 aeroplanes, Alibaba said.

Selling through livestreaming is still a lot of work, though. All the big names in China’s e-commerce industry – including Alibaba, JD.com and Pinduoduo – have launched initiatives to train livestreamers. Platforms and individual brands are racing to get their own talented livestreaming hosts, further contributing to the global shortage of talent, Dudarenok said.

In an attempt to address this problem, Alibaba introduced AI-powered avatars on Taobao Live that it calls digital “anchors”. The avatars act as animated digital assistants that help answer questions about products and sales concerns, easing the burden of busy hosts. But virtual assistants cannot replace the creativity and sass of the real hosts they accompany. For now, technology is relegated to just handling some of the grunt work. – South China Morning Post