Facebook in early October had announced an indefinite ban on political ads after Nov 3. — AFP

LOS ANGELES: Facebook and Google, which previously instituted moratoria on political advertising on their platforms following the closing of polls on Election Day in the United States, are extending the bans for at least the next few weeks to curb the spread of election misinformation.

The moves come as President Trump and his allies continue to dispute results of the US election, alleging without credible evidence that voting in key states was subject to fraud. Major news organisations projected Democrat Joe Biden as the winner of the 2020 race on Nov 7, and president-elect Biden has already been putting plans in place for his new administration.

In an update Nov 11, Facebook said that the "pause for ads about politics and social issues in the US continues to be in place as part of our ongoing efforts to protect the election." The social giant said the ban will last another month, "though there may be an opportunity to resume these ads sooner." Facebook in early October had announced an indefinite ban on political ads after Nov 3.

Google reps, meanwhile, have told advertisers that it probably will extend the political-ad ban at least through the end of 2020, The Wall Street Journal reported.

The decisions by Facebook and Google to extend their political ad bans were slammed as "unacceptable voter suppression" by the Democratic Senatorial Campaign Committee, which cited the pivotal runoff elections in Georgia set for Jan 5 that will determine control of the US Senate. Those will pit incumbent GOP Senators David Perdue and Kelly Loeffler against Democratic challengers Jon Ossoff and Reverend Raphael Warnock.

"These ad bans are voter suppression plain and simple, they directly benefit Republican senators, and at a minimum there should be an exemption for ads in Georgia over the next two months," DSCC executive director Scott Fairchild said in a statement. "Organic disinformation is the actual problem on these platforms, and continuing to ban ads is now actively harmful to organisations working to inform Georgia's diverse voters about the January runoffs."

In a Twitter thread, Facebook director of product management Rob Leatherman wrote, "We know that people are disappointed that we can't immediately enable ads for runoff elections in Georgia and elsewhere," He added, "We do not have the technical ability in the short term to enable political ads by state or by advertiser, and we are also committed to giving political advertisers equal access to our tools and services."

Twitter, where Trump has his biggest social-media following, banned political ads a year ago. – Variety.com 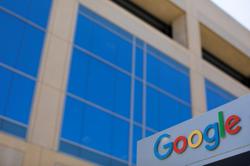