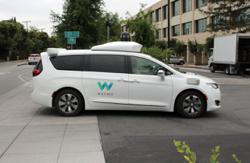 For the past two years, Waymo vehicles have traveled millions of kilometres throughout the United States, here in Chandler, close to Phoenix, Arizona. — Waymo/AFP

Alphabet's autonomous driving division, Waymo, has published an in-depth report after two years of testing its self-driving cars in the Phoenix, Arizona area in the United States. The company, part of the same group as Google, noted that no serious accident was reported and only 18 minor incidents, most of them caused by third-party vehicles or pedestrians. A rather positive first phase for the company.

Between January 2019 and September 2020, Waymo tested its 100% autonomous driving technology in the Phoenix metro area, both with and without drivers behind the wheel. Waymo's vehicles have driven over six million miles (9.66 million km) in fully automatic mode, but with a driver behind the wheel in case of emergency. Another 65,000 miles (104,607.4 km) were travelled without drivers. The 18 accidents comprise minor collisions and no major injury. Waymo underlined that 29 other similar incidents were prevented thanks to the onboard driver who deactivated the autonomous mode right in time.

Waymo (formerly part of Google's Lab X) has worked for the past ten years on autonomous mobility (cars, taxis and trucks) in US states that allow this practice, like Arizona, California and Nevada. The next step for Waymo is to convince a maximum of people and authorities that this technology is safe in order to be allowed to deploy its autonomous vehicles in other countries. – AFP Relaxnews New Zealand to use AI-enabled drones to track endangered dolphins
Judge in Google case disturbed that even ‘incognito’ users are tracked
McDonald's will test plant-based food, following Beyond Meat partnership
Pokemon's appeal continues to endure, even during the pandemic
That cheap 2TB USB stick is probably fake - here’s how you know
In ‘Dadish 2’ you’re a radish dad looking for your lost babies
Outgrowing your smartphone camera? Consider a system camera
Used electric car batteries are heading to factories and farms
Sony to open PlayStation 5 for storage upgrades in summer
Samsung Galaxy Buds Pro: All set to make waves