What economic recovery? China’s delivery drivers just along for the ride as other opportunities remain elusive

By Orange Wang and Minghe Hu

Despite China’s economy seeing considerable growth in the third quarter, a large segment of its working class is still feeling effects of the pandemic. A total of 24.7% of industry-leading Meituan’s 2.95 million delivery riders had at least a bachelor’s degree at the end of July, up from 18% a year earlier. — SCMP

When the temperature dropped sharply and heavy smog returned to Beijing on the last night of the recent “golden week” holiday, most downtown restaurants and stores closed early. But Chai Fengning was still riding through the streets on a black electric bike, standing out in his bright yellow uniform and helmet identifying him as an employee of Meituan – the largest on-demand delivery service in China.

The 23-year-old became a full-time food-delivery driver last month after the coronavirus pandemic upended the hospitality industry and cost him his job as a hotel receptionist.

Even though much of the nation was celebrating the eight-day National Day and Mid-Autumn Festival holiday period –a traditional time for family reunions – Chai could not afford to return to his hometown in Gansu province, a northwestern inland region more than 1,200km (745 miles) away from Beijing. Instead, he chose to stay in the capital and keep working.

Chai is among China’s growing army of delivery couriers – known colloquially as “delivery brothers” – frequently seen weaving through the streets on their scooters. 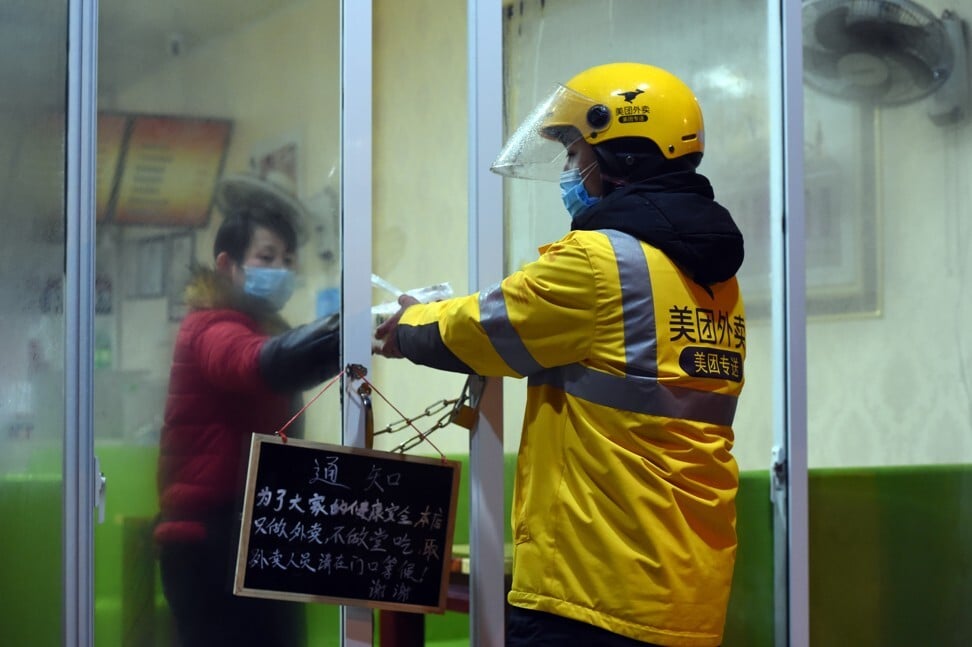 Since the initial imposition of coronavirus lockdowns earlier this year, a booming delivery sector has helped keep e-commerce humming along, serving as a crucial resource in keeping the country’s 1.4 billion people fed and supplied with essential goods, as well as a safe haven to absorb laid-off workers from other industries.

According to a recent report by the China Post and Express News, more than 75% of 65,000 package-delivery couriers recently surveyed were earning less than 5,000 yuan (RM3,094) a month, and most lacked access to social insurance. More than half of the respondents also said they work at least 10 hours a day, and around 60% said they take two or fewer days off each month.

“This is something that I think we should change,” said Zhao Xiaomin, an investor and independent researcher in China’s logistics sector, adding that most couriers are employed as “contractors”.

“The couriers have created huge wealth for the sector, but their own interests are being damaged in the long run without basic benefits,” he said. “The lack of benefits also explains why people usually take this as a temporary job.”

Another report this month, by China Labour Bulletin, detailed cases where drivers had not been paid during the pandemic. The Hong Kong-based NGO, which promotes and defends workers’ rights, recorded 25 protests staged by drivers who had not received their wages.

Huang Lihui, who works for Yunda Express in Shanghai, said he never expected the company to provide employer contributions to government insurance schemes, and he was not even sure about the legal status of his employment.

“I don’t care,” said the 31-year-old from Hebei province. “It’s a job to earn money... My family is not here, and I don’t plan to bring them here either, so I don’t think of social benefits much.”

On the surface, China saw a huge surge in tourism and consumer spending during the eight-day holiday period earlier this month, and this was pointed to as evidence of a broad-based economic recovery in the second half of the year.

But delivery couriers, who mostly hail from poorer, less-developed parts of China, are still experiencing first-hand the lingering damage from the pandemic – from job losses to weaker consumer spending – in the world’s second-largest economy.

Between January and September, more than 56 million parcels were delivered – up 28% from the same period last year, the State Post Bureau announced two weeks ago. And millions more have been delivered this month alone.

The numbers come as China is already preparing for its largest online shopping festival, which falls on Nov 11 – known as Singles’ Day, or Double 11. The single-day bonanza typically sees billions of dollars worth of online sales.

Like so many others, Zhao Yinzhou, from Xingtai city in Hebei province, has looked to capitalise on the surging demand for drivers this year to make ends meet in difficult times.

He has a bachelor’s degree in human resources and got a recruitment and training job at the headquarters of a large logistics company in Hangzhou, Zhejiang province. But due to a family emergency, he had to quit early this year. He came to Beijing to find new opportunities just before the coronavirus outbreak hit.

“Looking back, I deeply regret resigning, but it’s too late,” said the 29-year-old, who now works as a driver for Ele.me, the country’s second-largest on-demand delivery platform.

A record 8.74 million Chinese graduated from domestic universities this year. But their employment prospects are cloudy, given the ongoing impact of the coronavirus.

In the first half of 2020, at least 60,000 graduates with master’s degrees and a further 170,000 with undergraduate degrees became delivery riders, which are entry-level, low-skilled jobs, according to a report issued by Meituan in July. And a total of 24.7% of its 2.95 million delivery riders had at least a bachelor’s degree at the end of July, 6.7 percentage points higher than a year earlier.

“That means some college graduates are using rider jobs as a new employment option, or as a transition option,” the report said.

These types of challenges in China’s job market, despite now being magnified, surfaced long before the coronavirus pandemic.

A 44-year-old delivery driver surnamed Cai said he once ran a cafe in central Beijing. But four years ago, he had to shut down the business because of a local government-led campaign to tear down unauthorised storefronts that it dubbed “holes in the wall”.

“Afterwards, I pivoted to be a delivery rider and have kept doing this for four years,” Cai said.

He started as a part-time driver with Meituan but quickly became a full-time employee. To run more deliveries and take higher-paying long-distance orders, he bought a Honda motorcycle instead of the electric bikes generally used by other riders.

“When I was a boss, I was only willing to ride a bicycle to work,” he quipped.

He also kept working during the recent eight-day holiday, rather than returning to his hometown to see his son and daughter in the countryside outside Zhengzhou, the capital of Henan province.

“It felt like there were many fewer people in Beijing this golden week,” said Cai, who has lived in Beijing for more than a decade. “The number of orders was much smaller than usual, and the price of each order also declined a lot.”

This observation was echoed by Chai, who said he received only two orders and earned 35 yuan (RM21) during lunchtime on Oct 1 – the first day of the holiday.

“Many merchants were closed, and people preferred to eat at home during the holiday week,” Chai said, “but people in hotels would order something because they spent the whole day out sightseeing and preferred to have dinner or a snack back in their rooms.”

Such comments paint a less rosy picture than the one presented by official government statistics, which showed a 4.9% rebound in the country’s daily retail and restaurant sales during the holiday, compared with a year prior.

The decrease in the number and size of orders observed by Chai and Cai also manifested in smaller tips, they said.

Zhang Xuelin, a 38-year-old delivery driver working for Sherpa’s – a food-delivery service that targets foreigners and high-end dining in China – said he could earn up to 6,000 yuan (RM3,713) a month in cash tips a decade ago, when mobile payment apps were in their infancy.

“Now that consumers use mobile apps to pay for the orders, the tips are much less,” he said. “Ten years ago, you could expect that tips would be higher than your salary.”

In May, Beijing adopted a so-called dual circulation strategy, focusing more on domestic demand for growth than previously. This puts more pressure on consumer spending to continue driving the nation’s strong economic recovery from the coronavirus impact.

However, the rebound in retail sales and household consumption in China continues to lag behind investment, production and exports, fanning concerns about a sustained economic recovery if jobs and incomes fail to return to pre-coronavirus levels.

In its latest forecast, the International Monetary Fund projected China’s gross domestic product to grow by 1.9% this year thanks to state-led spending. The country is expected to be the only economy in the Group of 20 to record positive growth for the year.

The Chinese economy grew by 4.9% in the third quarter compared with a year earlier, the National Bureau of Statistics reported last week, up from growth of 3.2% in the second quarter and a contraction of 6.8% in the first quarter.

Although spending by the nation’s 1.4 billion residents has appeared to be more restrained since the start of the pandemic, delivery riders who spoke with the Post said their incomes were still enough for them to get by.

“You reap as much as you sow. It’s not a job with a stable salary,” he said.

In February, the central government clarified that the job of a food-delivery driver was an official profession in the national occupational classification catalogue.

Still, all riders interviewed by the Post complained that their companies failed to provide them with enough social welfare support.

“We don’t have the five mandatory insurance schemes,” such as unemployment, health and pension coverage, “only accident insurance,” Zhao Yinzhou said.

The two food-delivery giants faced public backlash over their treatment of drivers last month, after an investigative story by Chinese magazine Renwu found that many riders were violating traffic laws and risking their lives to meet ever-shortening delivery windows.

Cai, for instance, said he was fined 24 yuan (RM15) by Meituan one day this month because he was forced to cancel the delivery of two orders. But he said he had no choice, as restaurants were taking too long preparing the meals. If he had not cancelled those two orders, all of the following orders would have missed their delivery deadlines.

“The rules of this game are made by the ones with power.”

Chai encountered a similar experience during the golden week. Three of the orders he fielded one day were timed out after a 40-minute delay by the restaurant.

“It’s useless to appeal,” he said. “The platform doesn’t care about you.”

Zhao Yinzhou also said his rider income account was in the red by 4 yuan (RM2.50) at the end of the holiday due to platform-imposed penalties.

He said he is now preparing to take a psychological counsellor exam in December and hopes to switch his career after that.

“Being a delivery driver is not a long-term solution,” he said. “I don’t plan to do this job for a longer period, and it has nothing to do with the income level.” – South China Morning Post

Amazon drivers are hanging smartphones in trees to get more work