With traders far from offices, banks bring surveillance to homes Regulators, who early on had to relax some monitoring rules to enable traders to work from home, now expect kitchen tables to be as closely monitored as trading floors. — Pixabay

In this open-ended era of working from home, the financial industry is taking unprecedented steps to police bankers and prevent wrongdoing.

Traders at firms like Barclays Plc must certify they work in separate rooms to housemates. Morgan Stanley bankers are using laptops where every key stroke is recorded. Lenders including NatWest Group Plc are requiring daily location updates from traders and recording video calls.

With fresh lockdowns sweeping Europe this weekend, including Londoners being banned from mixing with other households indoors and Parisians under curfew, such remote monitoring seems here for the long haul.

The pandemic has already forced compliance officials at banks and trading firms to navigate a steep learning curve since March when they cobbled together a patchwork of measures for the first government-mandated lockdowns. Regulators, who early on had to relax some monitoring rules to enable traders to work from home, now expect kitchen tables to be as closely monitored as trading floors.

"Going forward, office and working from home arrangements should be equivalent,” Julia Hoggett, director of market oversight at the United Kingdom’s Financial Conduct Authority, said at a City & Financial Global conference this week. "This is not a market for information that we wish to see be arbitraged.”

The stakes for the banks are high. Insider trading, manipulation, and improper use of own accounts are all elevated risks when dealers are home alone.

After a decade trying to rebuild trust lost in previous trading scandals, firms have to show they have not forgotten the lessons. In the five years to September 2017, banks forked out US$375bil in conduct fines, according to a report by industry panel FMSB.

With offices around the world set to stay sparsely populated under tightening Covid-19 restrictions, the challenge of monitoring remote staff is here to stay. In the United Kingdom where about 1.1 million work in finance, government officials have urged office staff to work from home for as long as six months.

Things have improved since the first few chaotic weeks, when unprecedented market volatility triggered an avalanche of warnings that in some cases made enforcement impossible. Trade surveillance alerts increased over 600% for some global market participants in the first three months of the year, at the onset of the pandemic, according to data from Greenwich Associates.

"There were some weeks of chaos in some firms,” said Danielle Tierney, senior advisor for market structure and technology for Greenwich in New York. "Many firms simply were not able to comply with the rules.”

More muted markets and a refinement of remote compliance measures helped stem the tide of red flags since, with firms recalibrating their alerts and transferring staff to clear backlogs while introducing a slate of measures to police home offices.

Firms are logging every conversation and sifting corporate emails for troubling language. At many banks including NatWest, traders can only place orders if the request from the client is coming from an authorised device.

Taped phones and restricted bathroom breaks are common, while the head of a trading desk of a US bank in London, who didn’t wish to be named, has requested that his team write every trading move into a recorded chat.

"If you are trading electronically, then it must be through authorised communication channels that can be retained and audited,” said Adam Palmer, partner at ACA Compliance Group, which specialises in compliance for buy-side firms.

While some of the processes simply port over existing office practices into the home environment, remote working has also created unique headaches for compliance, including young traders working from their kitchen tables with roommates from different banks and couples who can’t help but overhear their partner’s work calls.

"Most banks have adjusted to the working from home from a business continuity perspective, but there are still problems on the compliance side,” said Erkin Adylov, founder of Behavox Ltd, which sells machine-learning programs to detect misconduct.

The physical absence from the office also raises cultural challenges.

"Work suddenly seems further away and rules and regulations that we need to follow seem less important,” said Evert Bekker at Capco, a consultancy that operates in the financial services industry.

And then there’s the threat from household technology. A recent report by Capco raised concerns that Amazon’s Alexa and Google Nest represent a growing security risk if staff work from home. Some firms have curbed employee use of untested communication channels including Zoom in a bid to ensure work talk is monitored.

With no vaccine in sight, spending on surveillance technology is set to soar to about US$1.5bil (RM6.23bil) globally next year, according to an estimate by Greenwich. But oversight will only go so far.

"At the end, it’s down to integrity and conduct,” said ACA’s Palmer. – Bloomberg 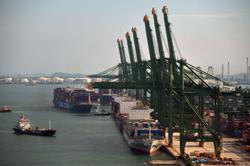