‘Ada Apa Dengan Dosa’ was released in June and pirated versions of the film were then offered on an e-commerce platform. — Astro First

A local film producer said she is planning to take legal action against an e-commerce platform after discovering that sellers were offering pirated copies of her film from as low as 80sen each.

“I’m disappointed because the platform allowed this to happen. I found out that people can contact the seller, make payment and then they will get a link to download the film through Telegram,” Datuk Normashayu Puteh said when contacted by LifestyleTech.

The producer, who is also known as Ayu Puteh, said her film Ada Apa Dengan Dosa (AAAD) which has a RM2mil production budget was released on Astro First in June. She later discovered that pirated copies of the film have been made available on an e-commerce platform shortly after the film’s release. 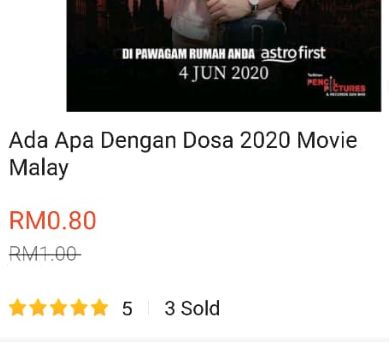 Ayu said she is planning to sue for RM50mil, as she claimed the e-commerce platform never sought distribution rights from her, nor did they obtain her permission to sell her film.

“Now with the movement control order and Covid-19 pandemic putting a strain on the local film industry, I don’t understand why people are taking advantage by pirating a product and then offering it for a low price on another platform,” she added.

Ayu claimed that she has raised the issue since June but only saw action being taken to removed the listings after Finas CEO Ahmad Idham Nadzri released a statement on Aug 3.

“We will be investigating both the e-commerce platform and seller for the local pirated film sale. We need to determine whether they have distribution license and permission from the producer to sell the films,” he said.

Based on reports that Finas has received, Ahmad Idham said both parties did not have permission from producers to sell those films.

Ayu also said that there are a number of chat groups on Telegram where users share links to download pirated copies of films. She hopes that the Malaysian Communications and Multimedia Commission (MCMC) will take action to shut down such groups.

She added that fellow industry players have expressed support towards her plan to take legal action against the e-commerce platform.

Dimsum Entertainment chief marketing officer Lam Swee Kim said e-commerce platforms should be vigilant in eliminating pirated goods, regardless of whether they are online content or physical goods.

“They should take an active role in curbing this rather than claiming ignorance. Some have resorted to taking legal action because all other efforts to protect their IP rights and ownership have failed,” she said.

She added that people’s perception towards piracy also needs to change as most still believe that it’s a “trivial matter”.

Film producer Ku Mohamad Haris Ku Sulong said due to fears of online piracy in Malaysia, he has decided to never release his award-winning film Redha on any digital platform.

“We have been approached by a number of parties and turned down all offers as we felt that there was no guarantee that the film won’t end up being pirated. It’s less income for us but we have to do what we can until we see more action or initiatives being taken to curb piracy,” he said.

He felt that it was worse to see pirated local films being offered openly on e-commerce platforms.

“We need to tell people that piracy is cutting into people’s income and livelihood. Just because it’s free and easily available, they are not thinking about how it could really hurt people in the long run.”

On Ayu's potential lawsuit, he said RM50mil is a good amount to “scare them off”.

“She can set the precedence for others to start taking issues related to piracy more seriously.”

UK to fine tech companies that fail to remove self-harm material
Twitter CEO Musk says user signups at all-time high, touts features of "everything app"
Zelle users have been scammed out of thousands. How to avoid being targeted on money apps
Private chef stuns TikTok with US$3,500 grocery bill for 36 items. ‘Grossly out of touch’
Opinion: How Sam Bankman-Fried exploited the ‘effective altruism’�fad to get rich and con the world
Robot pets help these US seniors make friends
NYPD officers, bystander save man who fell on subway tracks
India regulator asks One 97 Communications unit to reapply for payment aggregator licence
Mercedes-Benz criticized for hiding fast acceleration behind paywall
Catfishing cosmonauts, scamming soldiers: Never fall in love online?