Appetite for gadgets and the airwaves on which to run them is only growing. — mohamed Hassan/Pixabay

In his quest to expand US mobile broadband capacity, Federal Communications Commission Chairman Ajit Pai hasn’t been afraid to anger colleagues in government.

He’s taken on the Pentagon, the US National Oceanic and Atmospheric Administration as well as the departments of Transportation and Energy. Those agencies have warned that his plans to reallocate spectrum could endanger national security, harm weather forecasts, loosen control of the electrical grid and degrade vehicle safety.

So far, Pai has prevailed.

"Pai is willing to get himself on the hot seat," said Doug Brake, telecom policy director for the Information Technology and Innovation Foundation, a Washington-based policy group that works to accelerate innovation.

The fights are worth billions of dollars as industries jockey for rights to airwaves, riding a boom in usage for such things as online shopping, streaming television and social media. Appetite for gadgets and the airwaves on which to run them is only growing: the United States will have 1.2 billion mobile connected devices by 2023, up from 560 million in 2018, according to a forecast by Cisco Systems Inc.

Pai’s independence may be tested in coming months as President Donald Trump has ordered the FCC to draw up regulations to keep social media companies such as Twitter Inc from censoring political speech.

"This debate is an important one,” Pai said in a statement. "The Federal Communications Commission will carefully review any petition for rulemaking filed by the Department of Commerce.”

Pai, whose office didn’t reply to requests for comment, has an insiders’ profile that doesn’t suggest a penchant for inter-agency skirmishing. He is a former FCC commissioner, agency staff lawyer and US Senate aide, and before that an attorney for Verizon Communications Inc. President Donald Trump elevated him three years ago to chairman of the commission, which was created in 1934 to keep radio signals straight and now doing the same with wireless broadband.

Pai, 47, presents a whimsical public face for an agency steeped in arcane technical policy making. He spices his remarks with pop-culture references, citing the TV sitcom The Office and the film The Big Lebowski. His Twitter feed branches from telecom policy into philosophy, architecture and sports teams from Kansas City, not far from his childhood home in Parsons, Kansas.

As chairman, he has made priorities of pruning regulations and pushing for more mobile broadband to feed the nation’s insatiable appetite. With backing from the agency’s Republican majority, he’s compiled a series of victories for the wireless industry – and at times setbacks for older uses of airwaves.

NOAA, for example, said the FCC’s push to reallocate some spectrum would set back satellite-assisted weather forecasting decades. The Transportation Department warned about road safety when a patch of airwaves set aside for driverless cars was reassigned. The Energy Department opposed taking spectrum used by the power companies.

Perhaps most memorably, the Defense Department raised alarms about the FCC’s April 20 approval of a mobile broadband network, saying the service will interfere with military and civilian GPS.

Wins and losses are closely linked in airwaves policy because of the nature of spectrum – the invisible electromagnetic waves that carry communications. Each slice of airwaves can carry one use; a second use on the same frequencies invites interference, just as a shouted conversation in a room can drown out a quiet chat.

To avoid conflicts, regulators including the FCC put different services on separate airwaves. Antennas listen for the chatter on their assigned channels, and don’t pick up signals at higher and lower frequencies, which in turn are left to other users.

Assignments, including some set decades ago, have come under question as the mobile broadband revolution deepens, bringing fresh demand for airwaves to handle booming wireless traffic. Old services are being forced to move to different airwaves or share their frequencies with new arrivals.

Pai’s FCC has worked to set up frequencies for more WiFi and the high-speed gadgetry that will combine to form the 5G revolution of fast, ubiquitous wireless connections – a priority for the White House and big tech and telephone companies. The changeover promises such wonders as remote surgery, autonomous cars, rich virtual reality video feeds, and factories humming with connected equipment.

Pai takes credit for rearranging a dozen swaths of spectrum. The amount of airwaves affected is more those used by all US mobile broadband providers, Pai said in a video posted on the agency website last year.

Friction is inevitable as broadband and other wireless technologies vie for space in the crowded tableau of airwaves swaths, known as bands.

"Finding new bands or new opportunities to reallocate for new purposes is more difficult than ever before,” said FCC Commissioner Michael O’Rielly, a Republican. "There’s no greenfields to pick from. And so finding new spectrum for a new purpose means reallocating someone who already exists there.”

To others, the FCC’s airwaves fights show lax management by the Trump administration, leaving cabinet officers to push their own airwaves priorities.

"This is a result of running the administration as if it were an episode of The Apprentice,” said Harold Feld, senior vice president with the policy group Public Knowledge. "The federal agencies have just stopped cooperating.”

Space Force Commander General John Raymond said in a May 6 congressional hearing that Ligado Networks LLC’s plans for a mobile broadband network would interfere with GPS receivers, which rely on faint signals from satellites, and harm training.

The FCC shot back that it wouldn’t be moved by "baseless fear mongering.”

In a May 26 letter to Representative Adam Smith, chairman of the Armed Services Committee, Pai defended the Ligado decision, saying it "included strict conditions to ensure that GPS operations continue to be protected from harmful interference.”

In a teleconference with lawmakers on May 19, Pai said "America needs to lead in 5G and that requires us to think creatively about a variety of different spectrum bands.”

Changes keep coming. The FCC in April voted to allow WiFi on the 6 GHz airwaves, despite an expression of concern from the Energy Department. Utilities said the change risks interference to electric, water, and gas transmission and distribution systems. Chipmaker Broadcom Inc called the action "momentous” and "a definitive moment in US wireless history.”

Bidders may include largest US providers Verizon, AT&T Inc. and T-Mobile US Inc, who all snapped up airwaves in earlier FCC auctions.

"It isn’t easy to get the government to move quickly on anything,” Meredith Attwell Baker, president of CTIA, a wireless industry trade group with members including AT&T and Verizon, said in an email. Pai "deserves tremendous credit for making sure wireless providers have the spectrum they need to meet our nation’s 5G ambitions.”

Not easy, and not without turmoil. The debate with NOAA concerned power levels for an airwaves swath that Verizon won in an FCC auction. The disagreement persisted for much of 2019 before agencies, working with the State Department, arrived at a unified position. The result was a lower power level than the FCC wanted, and more than NOAA preferred.

Bipartisan leaders of both the House Science Committee and the Commerce Committee have asked the Government Accountability Office to probe how the NTIA and other federal agencies interact to resolve spectrum disputes.

Representative Greg Walden, of Oregon, the Commerce Committee’s top Republican, in an email said that "not everyone will be satisfied all of the time” as spectrum allocations are made.

"In this administration, instead of having everyone pull in the same direction, we have disputes that are pulling us apart,” said Commissioner Jessica Rosenworcel, the agency’s senior Democrat. – Bloomberg 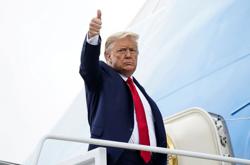 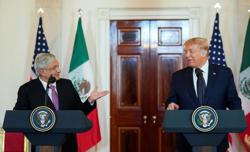 Mexican president thanks Trump for not mentioning border wall at summit