Monique Kursar, left, completes a purchase with Witt, owner of the Velvet Window, in Dallas. Small businesses are navigating a new way to work with customers amid concerns of the spread of the coronavirus. — AP

NEW YORK: Many business owners are changing the way they make money as they attempt to recoup revenue lost to the coronavirus outbreak.

The changes can look subtle; for example, when owners of clothing stores decide to beef up their internet business. But often such adjustments involve an entire rethinking of the business model – the blueprint that encompasses the key aspects of running a company – with significant changes to staffing, technology and inventory.

For many companies, it’s a matter of survival, but for others, the changes have been a silver lining amidst the crisis.

When Big Bottom Market, a cafe and food shop in Guerneville, California, closed in mid-March, "I had to take stock of what we had and think about how we could evolve the business,” says co-owner Michael Volpatt.

Volpatt started a daily cooking show on Facebook in hopes of drawing customers to Big Bottom’s page on the online marketplace Etsy. He succeeded: Daily visits jumped 66% and customers stocked up on merchandise including biscuit mixes, coffee, preserves and T-shirts. That revenue from Etsy covered Big Bottom’s monthly rent, utilities and insurance.

The cafe, which gets business from visitors to California’s Sonoma wine region, reopened with social distancing steps May 8, selling meals and merchandise at the door. Business is down 80% from its usual pace – the café can normally seat 40. During the week, the cafe’s business is mostly from people who live locally, but the weekends bring people from all over the Bay Area.

Volpatt doesn’t know when he’ll fully reopen the cafe but going forward he expects to get substantial business from the Internet. He’s even hiring a staffer to help build Etsy sales.

Four months after launching the Velvet Window clothing store in Dallas, Amy Witt was forced to close its doors. She soon realised she’d need to adjust her approach to ensure customers came back when the store reopened.

"The forced closure gave me the opportunity to say, ‘what’s wrong with my business, how do I fix it?’” Witt says.

Before the outbreak, 85% of Witt’s business came from shoppers coming into the store. With the shutdown, she realised she needed to be more aggressive with social media to draw shoppers to her website; she needed revenue and to engage with her customers. She taught herself and her staff how to make Velvet Window more visible in Internet searches. She picked up new customers, including some outside the Dallas area.

As she prepared to reopen May 1, Witt concluded she had to offer more services and accommodations in a retail environment reshaped by the outbreak. So she set up private shopping hours for some customers – for example, those most at risk for complications if they contract the virus. She’s using video or messaging apps to show her fashions to others anxious about coming to the store. Curbside pickup or deliveries can also be part of the deal.

She sees all these steps as elements in a new business strategy: "It’s something we will continue to offer” even after the current crisis ends, Witt says.

Overhauling or refining a business model should be an ongoing part of running a company; even successful owners often think about making adjustments. But any crisis forces owners to reassess their business. After companies were forced to lay off staffers during the Great Recession, many turned to freelancers when they began hiring again. That saved money on salaries and benefits and gave owners more flexibility.

Business models are likely to undergo significant changes in the coming months given the damage to the US economy from the outbreak. A lot of uncertainty remains about how much consumers will be willing to spend, travel, dine out and go to sports and entertainment events – and when social distancing measures that limit business will be lifted.

Before the outbreak, D’Artagnan sold most of its high-end meats to restaurants where customers might pay US$50 (RM218) for filet mignon or dine on exotic varieties such as squab or quail. But with restaurants closed, half the company’s business is now from people buying meat to cook in their own kitchens or on the backyard barbecue. That means the Union, New Jersey-based company ships smaller cuts and packages of beef and chicken to consumers rather than the larger cuts and whole animals it delivers to restaurants.

"It’s a very different demand in the kind of animals people buy to cook at home instead of ordering in a restaurant,” owner Ariane Daguin says. The changes mean different procedures for butchering and packaging the company’s products.

D’Artagnan’s e-commerce business, which accounted for 10% of revenue before the outbreak, is up five-fold, says company president Andy Wertheim. The company won’t know until restaurants are operating again what their demand will be, or whether people will continue to do their cooking at home. But, Wertheim says, D’Artagnan is prepared to have a different business model going forward and increase its staff to get the work done.

The changes at some companies have come from serendipity rather than crisis. At law firms, shelter-in-place rules have forced attorneys to meet with clients over video rather than in a traditional office visit.

Attorney Katherine Miller’s work includes mediation in divorce and family law cases. She says the virus outbreak has chipped away at clients’ reluctance to hold meetings online. She plans to use that change in attitude to expand her practice.

With the use of video meetings, it will be easier to coordinate schedules when all the parties don’t have to travel to her office, and Miller will have less travel time when she attends meetings. And she won’t be limited to her current practice area, New York City and its northern suburbs.

"I used to think, this is going to be an uphill battle to convince people that it’s a good idea. But now because of the coronavirus, I don’t have do that anymore,” she says. – AP 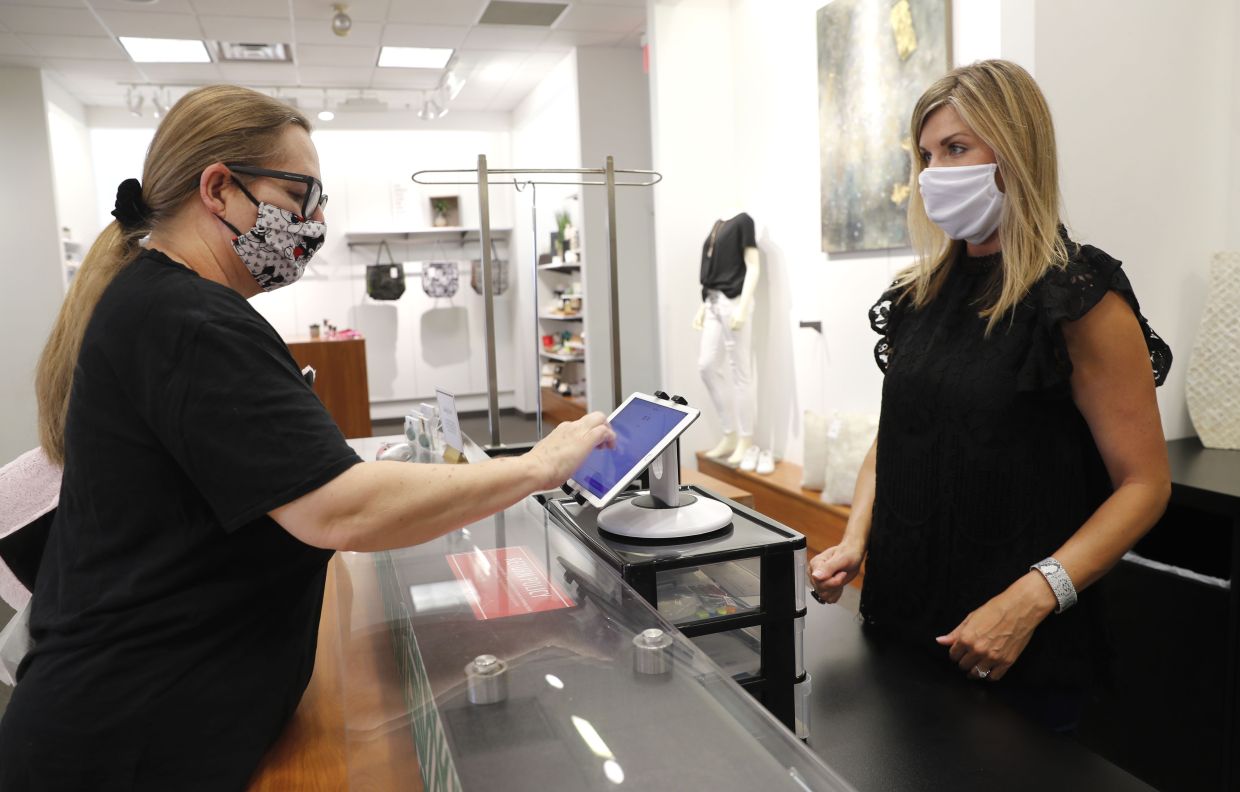 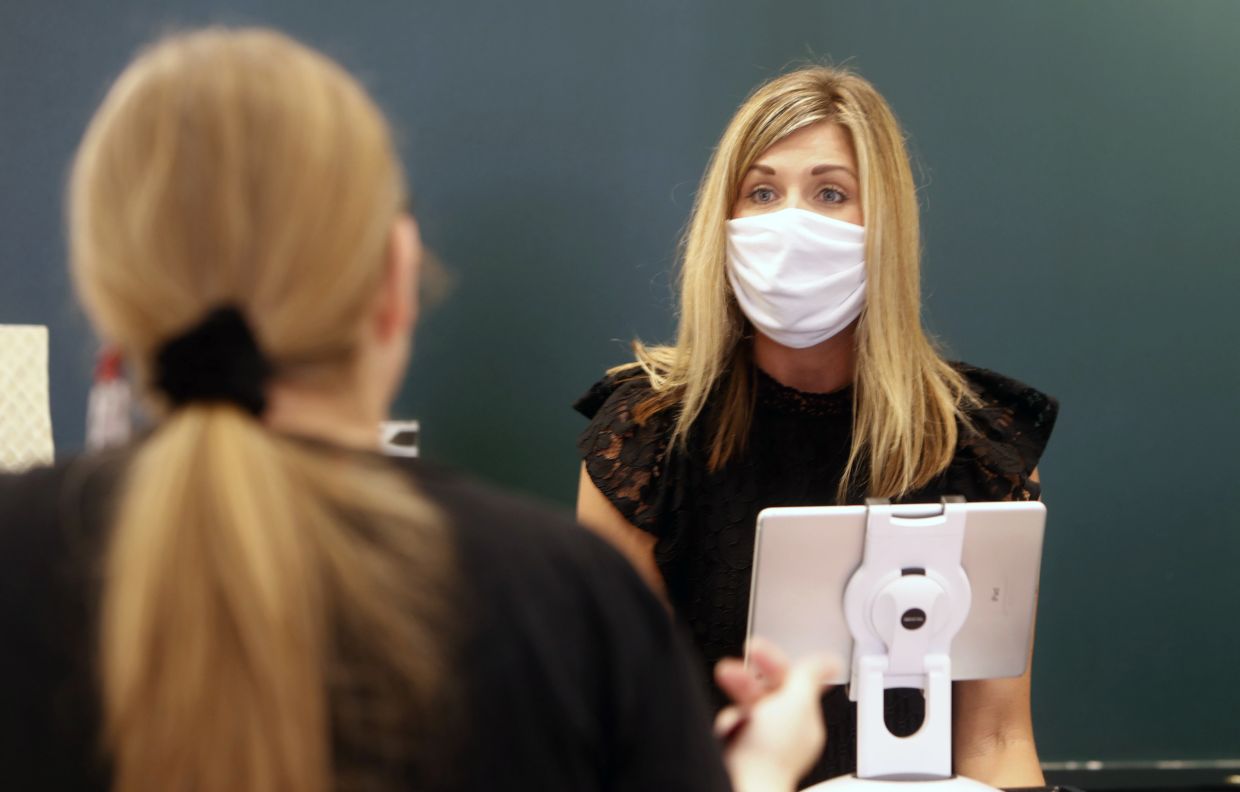 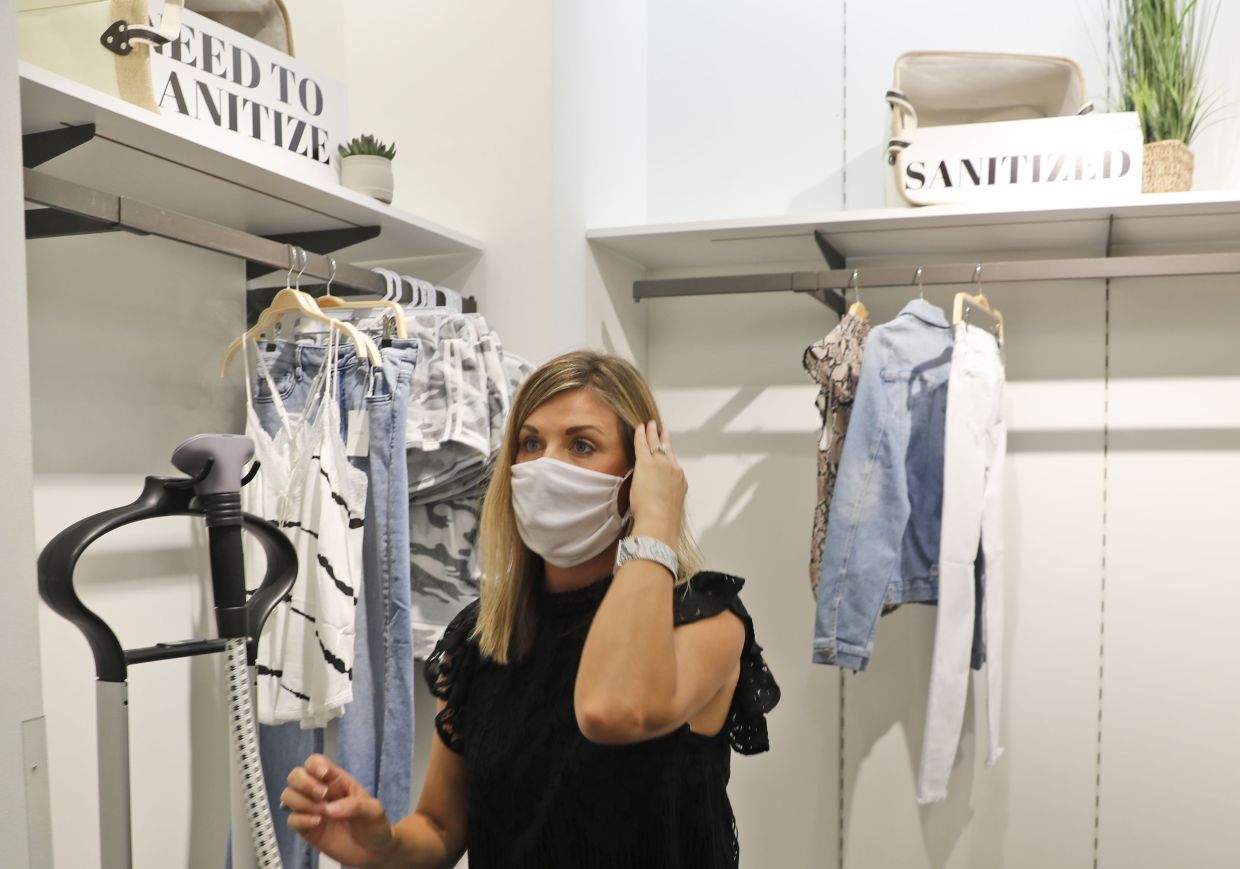 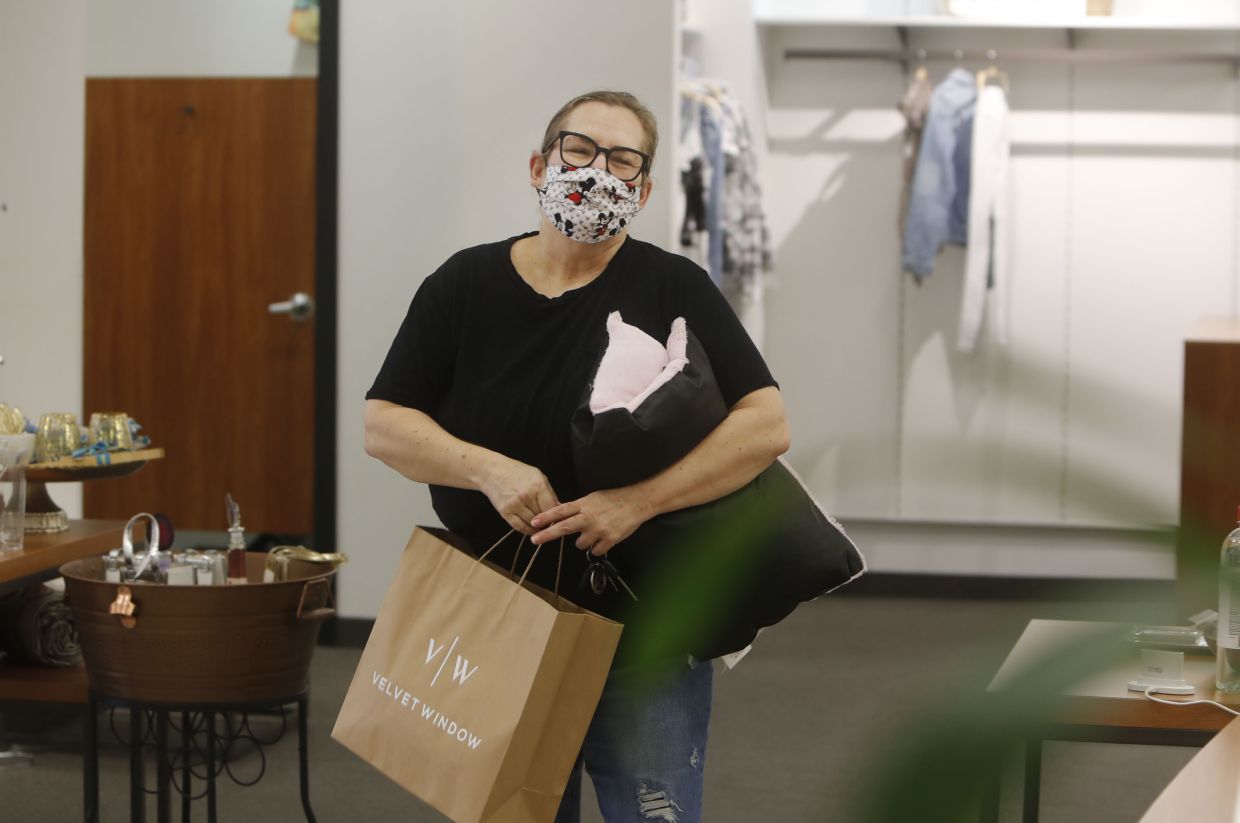 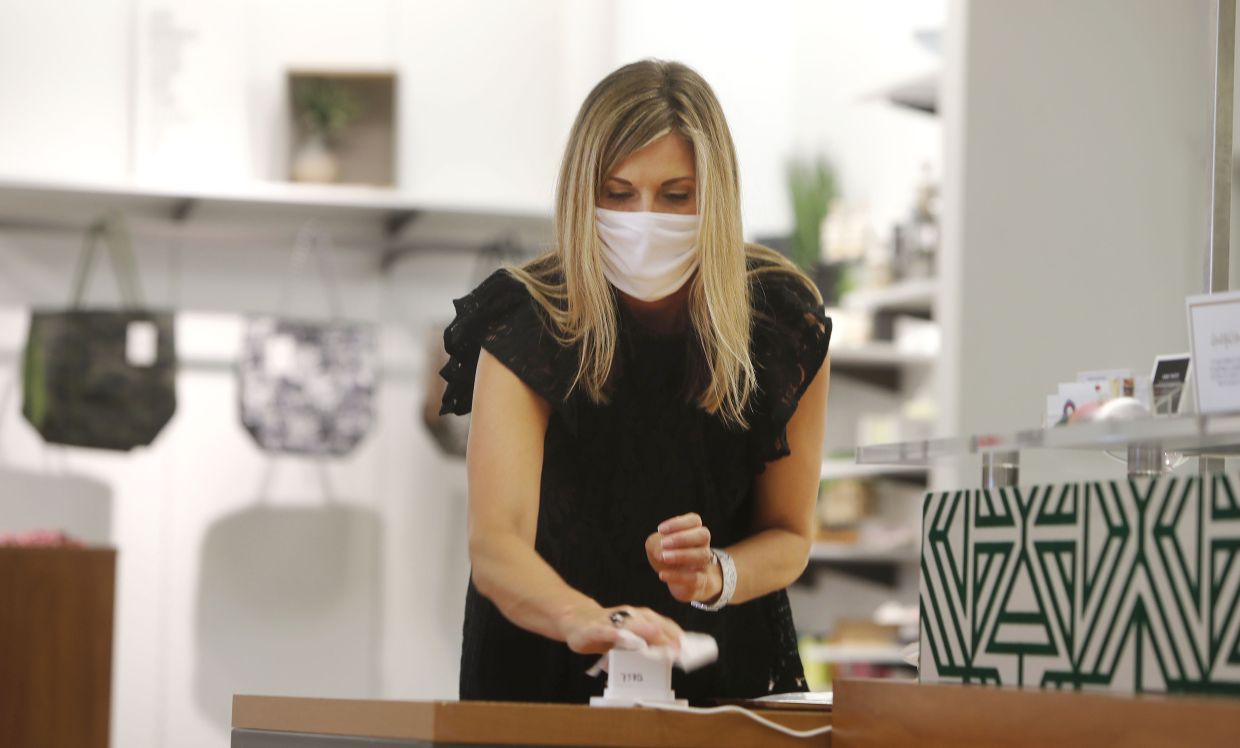 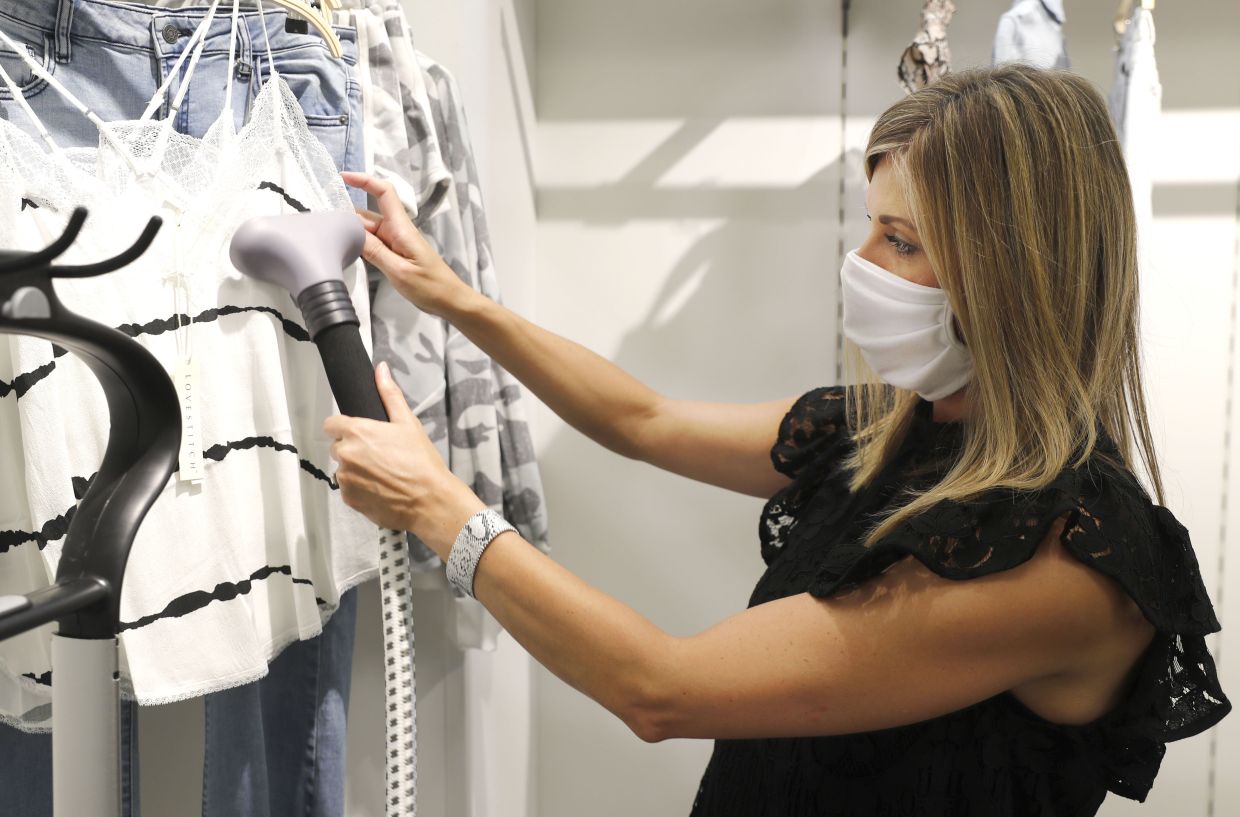 Monique Kursar, left, completes a purchase with Witt, owner of the Velvet Window, in Dallas. Small businesses are navigating a new way to work with customers amid concerns of the spread of the coronavirus. — AP

Witt, right, owner of the Velvet Window, talks with store customer Monique Kursar, in Dallas. Small businesses are navigating a new way to work with customers amid concerns of the spread of the coronavirus. — AP

Witt, owner of the Velvet Window, takes a break from steam-sanitizing clothes to tend to a customer, in Dallas. Small businesses are navigating a new way to work with customers amid concerns of the spread of the coronavirus. — AP

Monique Kursar talks about shopping at the Velvet Window in Dallas. Small businesses are navigating a new way to work with customers amid concerns of the spread of the coronavirus. — AP

Witt, owner of the Velvet Window, wipes a credit card reader after completing a sale with a customer at her store, in Dallas. Small businesses are navigating a new way to work with customers amid concerns of the spread of the coronavirus. — AP

Witt, owner of the Velvet Window, steam-sanitises clothes that had been tried on by customers, in Dallas. Small businesses are navigating a new way to work with customers amid concerns of the spread of the coronavirus. — AP