A passenger wears an electronic wristband upon arrival at Hong Kong International Airport, following the novel coronavirus disease (Covid-19) outbreak, Hong Kong, China. Some Hong Kong residents returning from overseas have found they can’t register with the app that’s meant to track their movements via their mobile phone, meaning authorities have no information on their whereabouts during the mandatory 14-day self-quarantine period. — Reuters

A glitch in Hong Kong’s electronic tracking system, designed to ensure people under compulsory quarantine orders stay at home, could potentially allow many to go outside undetected.

Some Hong Kong residents returning from overseas have found they can’t register with the app that’s meant to track their movements via their mobile phone, meaning authorities have no information on their whereabouts during the mandatory 14-day self-quarantine period.

T.L. Wong, a 19-year-old undergraduate student studying in Edinburgh, came back to Hong Kong on March 19, the day the compulsory isolation measure for all inbound travelers from foreign countries took effect.

He received a wristband with a QR code upon arrival at the airport. According to the instructions, he should have gotten a text message with a unique pin for activation of the tracking app once home.

But Wong, who hasn’t left his home, only received a text message after 24 hours had passed. When he tried to activate the app by scanning the QR code and inputting the pin, he got an error message.

Wong tried calling the Office of the Government Chief Information Officer, which created the system, but the line was either busy or the person who answered couldn’t provide assistance. Wong’s friend who flew back with him encountered the same problem.

The Office of the Government Chief Information Officer said in an emailed statement that a small number of people had been unable to receive text messages because of incomplete or incorrect phone numbers on quarantine-order forms. Hong Kong’s Department of Health plans to follow up on any cases of activation failure, according to the statement.

Wong’s wristband is one of around 24,000 tracker bracelets the government has distributed to monitor new arrivals. The band is meant to connect to an app that sends out alerts asking the person to take pictures of themselves wearing the wristband, and issues warnings if it senses the person had left their place of residence. The device detects and analyses radio signals, including bluetooth and wifi, as well as geographical location signals when it’s activated.

Mandatory self-isolation is one of the policies being taken in Hong Kong to curb the spread of Covid-19. The city’s Chief Executive Carrie Lam on Monday announced the government will also ban all foreign travelers from entering the city for 14 days and prevent bars from serving alcohol.

Charmaine Man, a 24-year-old working in film production, is another person affected by the wristband issue. She hasn’t received any text message since returning to Hong Kong from Malaysia on Saturday. Even though she plans to stay at home for the entire isolation period, she’s worried about any potential legal risk due to the system’s failure.

"This is a mandatory quarantine, but when I can’t activate the app, will they consider I’m breaking the law?”

Scores of people in Facebook groups have also reported the same problem, while there have been photos and videos of people taking their quarantine wristbands on public transport. – Bloomberg 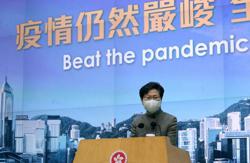 Why is there such a fuss at the moment about Signal?
Selena Gomez: Big Tech ‘cashing in from evil’
Selfie-snapping rioters leave FBI a trail of over 140,000 images
Autonomous driving in private cars coming by 2030, supplier says
NASA's Boeing moon rocket set for 'once-in-a-generation' ground test
WhatsApp to delay launch of update business features after privacy backlash
Social networks clamp down on Colombian FARC dissident accounts
Amazon union election to start in February, U.S. labor board says
Crack a window! This smart home smoke alarm will tell you it’s stuffy
As WhatsApp loses users over new terms, Signal rolls out new features