By Keith Zhai and Fanny Potkin

A package for delivery on a conveyor belt at online retailer Lazada’s warehouse in Depok, south of Jakarta, Indonesia. The conflict illustrates how Alibaba's business practices have sometimes played poorly abroad and hindered its overseas ambitions. It also shows how tensions can emerge within global companies as they struggle with the virus crisis. — Reuters

SINGAPORE: At Lazada, the South-East Asian arm of Alibaba Group Holding, staff are furious over demands they submit health reports daily and other coronavirus-prevention steps seen as too invasive, highlighting a long-running culture clash with management from China.

Since February, Singapore-based Lazada has asked all employees to answer detailed questions seven days a week about their health and where they have been lately, according to five people with direct knowledge of the matter.

While the e-commerce firm describes the health reports as not mandatory, employees receive frequent calls from human resources, even on weekends, to make sure reports are submitted, the people said.

Lazada has also asked Singapore employees to wear masks at work, contrary to guidance from authorities, and has also considered urging employees to refrain from attending religious gatherings, they said.

The five employees, who said staff anger was widespread, detailed the measures to Reuters on condition of anonymity because they fear retribution. Three showed Reuters a copy of a health report they had submitted.

Such measures are not unusual in China, which has imposed draconian rules to contain the virus. But they are seen as a huge invasion of privacy by many Lazada staff in countries that include Indonesia, the Philippines and Thailand.

The conflict illustrates how Alibaba's business practices have sometimes played poorly abroad and hindered its overseas ambitions. It also shows how tensions can emerge within global companies as they struggle with the virus crisis.

“How does the company use the information gathered daily? Nobody is able to explain,” said one of the employees, expressing concern that Lazada might pass on the information to governments.

Magnus Ekbom, Lazada Group chief strategy officer, denied there were issues with staff unhappiness over the measures in a statement to Reuters.

"Lazada has a clear top priority to safeguard the well-being of our team and the community around us,” the statement said. “Our approach is in line with the recommendations made by the various governments in nations we operate in.”

Sources also say this is just the latest chapter in Alibaba’s struggles to manage Lazada, a company it owns 90% of after investing US$3bil (RM13.32bil) since 2016 and where morale has been rapidly declining.

Once the top e-commerce firm in South-East Asia when Alibaba first invested, Lazada has now fallen behind rivals in a fast-growing market of 650 million South-East Asia consumers across six countries, according to market researchers.

Underlining management woes have been the quick departures of Alibaba executives dispatched to Lazada, with the latest co-president of the unit leaving in January after less than 18 months.

“Some Alibaba executives sent to Lazada have the natural tendency of pushing things the Alibaba way because it proved right in China,” said Jianggan Li, the founder of Singapore-based tech investment firm Momentum Works.

“Many tend not to have enough respect for the market, and patience to understand the market deeply,” he said, adding that Alibaba’s international efforts were still in their early days and the tech giant probably had the determination to learn from mistakes.

Alibaba declined to comment on issues at Lazada for this article.

The sources told Reuters many employees had raised their concerns to managers via meetings, emails and messages on DingTalk, an app developed by Alibaba that enables managers to keep constant tabs on staff.

The request that employees at Singapore headquarters wear masks resulted in many queries as it runs counter to guidance from Singapore authorities who recommend masks only if feeling unwell.

“People are confused. If they think working in the office is that dangerous, they should’ve asked us to work from home,” one employee told Reuters.

There were also suggestions from Chinese managers about asking employees to reduce social activities, including religious gatherings, though those steps were not implemented in the face of employee resistance, the sources said.

The pushback has resulted in some changes, as some countries where Lazada operates, such as the Philippines, have stricter privacy laws than China. On March 10, Lazada added a paragraph on privacy protection to the terms of its health check-in programme.

“All personal data collected from the daily health check-in programme shall be processed in accordance with the local data privacy laws,” said an updated version reviewed by Reuters.

According to sources, senior Lazada executives from China have often been quick to impose what has worked for the mainland Chinese market with little regard to local needs or sensitivities in South-East Asia’s fragmented markets.

Some failed strategies include temporary halts to free shipping in some markets which drove merchants to other sites, and attempts to promote bulk buying, the sources said. They added that these mistakes and a tendency for China executives to have key discussions without local input have taken their toll on Lazada’s business performance and on morale.

At job search website Glassdoor, anonymous employee reviews are mostly very critical. Among those that were positive, several said they were writing at the explicit request of Lazada CEO Pierre Poignant who asked employees in a townhall to write glowing reviews. Lazada did not address a Reuters query about the reviews in its statement.

E-commerce in the region was worth US$38bil (RM168.81bil) last year and is expected to grow rapidly, according to a study by Google, Temasek and Bain & Company.

Shopee was the most downloaded e-commerce app and the most used in the region as of end-2019, knocking Lazada to second place, according to research firm iPrice. Shopee's website also attracts more visitors than Lazada’s, iPrice said.

Lazada disputed the market share assessment. "Lazada has the largest active consumer base in Southeast Asia and continues to gain market share,” said the statement by Ekbom, without providing further details.

According to three of the sources, executives from China often do not last long.

Jing Yin, a former Lazada co-president quietly left in January and returned to Alibaba’s headquarters in Hangzhou, the people said. Others include the head of Lazada's product team, Jin Luyao, who also returned to Hangzhou in January after less than 18 months while the CEO of the Vietnam unit, Max Zhang, returned in mid-2019 after spending little more than a year in Ho Chi Minh City.

Prior to that, Lucy Peng, one of Alibaba's co-founders, stepped down as Lazada CEO in 2018 after just nine months although she remains executive chairwoman.

Alibaba veteran Jessica Liu has replaced Jing. People who have attended meetings with her said she is smart and understands e-commerce well but her English is limited. That's added to concerns Alibaba doesn't understand South-East Asia, where English is the dominant language for international business, they said.

Lazada and Alibaba declined to make Liu available for comment. Efforts to reach Liu and the other executives by email and Linkedin were not successful.

The clashes and history of departures have left Alibaba employees wary of coming to the South-East Asian unit.

"Many people in Hangzhou now see Lazada as a career black hole," one of the sources said. — Reuters 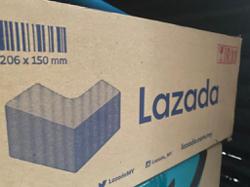