A man, wearing a protective facemask amid fears about the spread of the Covid-19 novel coronavirus, walks past the Rain Vortex display at Jewel Changi Airport in Singapore. — AFP

A top Singapore official rebuffed Facebook Inc’s criticism of the country’s fake news law as an "allergic reaction” to getting regulated, arguing the spread of misinformation about the coronavirus pandemic reinforces the need to police the Internet.

Communications and Information Minister S. Iswaran said in an interview the proliferation of falsehoods around the outbreak has demonstrated how legislation is needed to quell errant online information. He said he wasn’t surprised by the US social media giant’s response to a government order to block a page on its website. While Facebook complied, it warned that could set a precedent for stifling free speech – a rare instance of a foreign company openly questioning the affluent nation’s policies.

Singapore, which is fighting a likely economic slowdown and a resurgence in Covid-19 cases, is under fire from opposition politicians and rights groups about its Protection from Online Falsehoods and Manipulation Act. Tech giants from Google to Twitter Inc are grappling with the so-called fake news law in a country that houses their Asia-Pacific headquarters. Since it was enacted in October, the law has been invoked on several occasions, stirring concerns from critics it would be used to suppress dissent ahead of elections that must take place by April 2021.

"I can imagine there is a certain allergic reaction to that” because Facebook is moving into a more regulated environment, said Iswaran, who oversees a large part of Singapore’s technology initiatives as well as relations with major trade partners. "We are quite clear that we must take action against some of the adverse consequences because if not, it can undermine the confidence in our institutions and ultimately our whole democracy. And the way we have been exercising our powers has been proportionate.”

US Internet giants are under growing pressure worldwide to curb the spread of misinformation on their globe-spanning platforms, most recently around the coronavirus pandemic. Governments are concerned about their influence in an era where more and more people get their news online and through social media.

Tensions with US tech firms come as the Asian financial hub is trying to position itself as regional center for digital innovation. Home to more than 4,000 startups today, the country attracted the equivalent of some US$10bil (RM42.53bil) in 437 venture deals during the first nine months of 2019, up 36% from a year earlier, according to Enterprise Singapore.

The fake news law may cloud relationships with tech companies. Facebook said last month it was "deeply concerned” by the order to block The States Times Review’s page in Singapore, after the blog was accused of conveying falsehoods and then refusing to comply with directions served under POFMA. While Singapore won’t compromise on principle, it will continue to engage tech platforms, Iswaran said.

"In the lead-up to the legislation, there were several rounds of consultation with tech companies in order to understand some of their concerns and see where we could accommodate some of their issues and that was in fact taken into account,” he said.

The minister said Singapore’s goal to cover half the city-state with fifth-generation wireless technology by 2022 remains on track.

He didn’t give a dollar value for the amount the country could get from carriers for the spectrum, saying the plan is to encourage investment in the infrastructure needed for the high-speed technology to succeed. Singapore’s telecom regulator has received proposals for 5G licenses from companies including Singapore Telecommunications Ltd. and an alliance of Keppel Corp.-backed M1 Ltd. and StarHub Ltd. The watchdog expects to award spectrum licenses by the middle of this year.

"We want the telcos to invest in the infrastructure,” said Iswaran. If "the bulk of the resources are taken away as license fees then the capacity to invest in this is significantly reduced.”

The spread of Covid-19 just reinforces the importance of digitalisation, he added. The World Health Organization declared the coronavirus outbreak a pandemic on Thursday, urging governments to step up containment efforts as the number of worldwide cases topped 120,000 and deaths exceeded 4,300.

"For businesses, thinking in terms of business continuity planning and measures you put in place will now take on a sharper focus,” he said. "Digitalisation becomes more salient than in the past in light of this.” – Bloomberg 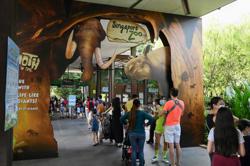