YouTuber attempts to distribute RM10k to reporters at Istana Negara, claims it was ‘just for fun’

Isa (first from right) has been making YouTube videos since 2014. His attempt to give away RM10,000 to reporters at Istana Negara has been met with some criticism. — YouTube/Isa Isarb

A local YouTuber who goes by the handle Isa Isarb has posted a video where he claimed to have attempted to give away RM10,000 in cash to reporters at Istana Negara in Kuala Lumpur, yesterday.

In the video titled ‘Habiskan RM10K Bagi Wartawan Di Istana Negara!’, Isa detailed how he and his friends decided to give away RM10,000 in a series of RM1 notes after seeing how reporters on palace grounds have received food contributions from Yang di-Pertuan Agong Al-Sultan Abdullah Ri’ayatuddin Al-Mustafa Billah Shah earlier this week.

When contacted by StarLifestyle Tech, Isa, 22, said he thought the reporters on the ground could use his contribution to spend on items like snacks or drinks while on duty.

“I think people assumed that I only gave RM1 per person at Istana Negara. But it was not the case. My team and I distributed the cash in random amounts. Some received RM2 and there were those who took more than RM5,” Isa said, adding that he also gave away money to onlookers and food truck workers on the palace grounds.

Isa said he withdrew the money from his personal account and got his friends together to film the giveaway video. In the video, Isa described his attempt as a “challenge” where he aimed to completely give away his cash to as many reporters as possible.

“Why am I doing this? I have no reason. I just want to do it,” he said in the video.

When Isa arrived at Istana Negara, he and his friends immediately started giving away RM1 notes to reporters, by describing the giveaway as “a gift”. When a person asked where is he from, Isa said he's from nowhere and just wanted to give away the money. He also explained that it was “not a bribe”.

His attempt eventually came to a halt when police told Isa to stop. Isa can be heard explaining to the men that it was “just for fun, giving RM1...”. He was informed that “it was not right” and had to leave the palace grounds. Isa then lamented to viewers then he was “chased away”. He claimed that he was only able to give away between RM600 to RM700.

As he drove away from the palace, Isa claimed he was followed by two men in a car who wanted to speak to him about his giveaway.

“They didn't say where they were from but they looked like bodyguards. They just told me that I should give away items like food next time as something like cash is not appropriate,” he said to StarLifestyle Tech.

Isa, who has over 375,000 subscribers on his YouTube channel, said that he had received a mix of both positive and negative comments from viewers on his video, which at the time of writing had racked up over 6,200 likes versus 917 dislikes.

“Some told me what I did was good. There were those who also said I should attempt to give away cash to the needy next time,” he added.

He admitted however, that viewers on his Facebook page were less forgiving about his attempt where most viewers branded his act as “disrespectful” and “inappropriate”. 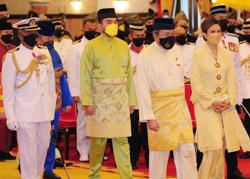 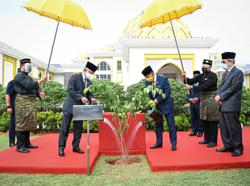