XINGU INDIGENOUS PARK, Brazil: In the 1980's Brazil's first indigenous Congressman, Xavante chief Juruna, went around with a recorder to tape conversations with other politicians because he said the white man's word was not to be trusted.

In the digital age, threatened by destruction of their forest and the encroachment of farming on their lands, Brazilian tribes are posting video on social media and filming with cameras mounted on drones to tell their story and bolster their threatened cultures.

At a meeting this week of hundreds of Amazon tribal leaders on the Xingu reservation to discuss ways to resist government plans to assimilate indigenous people, every speech and ritual dance is being recorded and posted on the Internet.

Midia India, a network that calls itself the Voice of Indigenous People, posts news and images on Instagram and podcasts on Spotify, to help keep Brazil's 850,000 indigenous people informed.

Erik Terena, one of its organisers, said this has become a more urgent task than ever since the election of far-right President Jair Bolsonaro, who has said indigenous people should not be kept "like animals in a zoo" and plans to open up their reservations to commercial mining and agriculture. An Indigenous child films the speech of a Kayapo woman during a four-day pow wow in Piaracu village, in Xingu Indigenous Park, near Sao Jose do Xingu, Mato Grosso state, Brazil.— Reuters

"We are living under a government that uses fake news and lies to harm the indigenous population," he said.

"We are having to fight against a new colonisation by resorting to ethno-media to tell the truth about us," said Erik, a member of the Terena tribe.

Bolsonaro has said his plan to develop the Amazon will lift indigenous people from poverty. Environmentalists warn it will speed up destruction of the world's largest tropical rainforest, a bulwark against climate change. 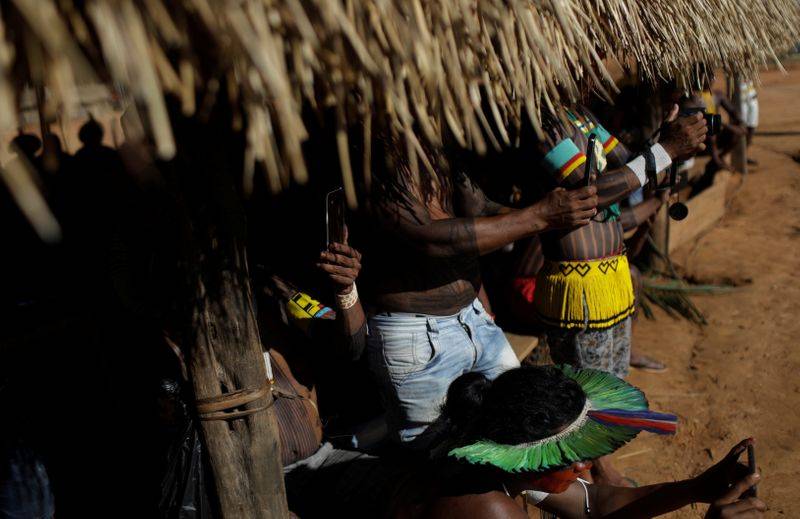 One of Midia's recent posts showed British rock singer Sting's friend, Kayapo chief Raoni Metuktire, wearing a headdress of cornbird feathers and calling on the Bolsonaro government to leave indigenous communities in peace as he opened the Xingu meeting.

A photograph posted in January showed a burning building following an attack by armed men who threatened a Kaiowe tribe village in Mato Grosso do Sul state, an area of violent land conflicts with farmers in recent years.

Photographer and film director Kamikia Kiseje, who was documenting the event, said digital photography and video had become a vital tool to broadcast the voice of Amazon tribes which are losing ancestral lands and forest habitats. – Reuters