With the proliferation of drones, local companies have started imagining a future where drones will be a part of our lives. This is why they are not only exploring everyday uses for them but also means to stop rogue ones.

The company caught Pos Malaysia's attention when it won the national mail carrier's Parcel Drone Competition in March which netted it a cool RM25,000.

Ahmad Zaki said the company’s drone – originally made for mapping before being retrofitted – was the fastest to complete a 1km route that went over a lake, and also safely deliver a 2kg parcel.

Average Drone CEO Hamdee Hamdan with the cage that was used to protect the food. The delivery drone is on the far right. — Bernama

He claimed the company is in talks with Pos Malaysia to test a postal drone delivery system, though he could not confirm anything concrete.

Drones have also attracted the attention of the government.

In Budget 2020, the Finance Minister announced an RM25mil matching grant for pilot projects on digital applications like drone delivery that will take advantage of Malaysia’s high speed broadband and upcoming 5G infrastructure. Wahab showing the jammer and controller for taking down rogue drones within a large area. — QISHIN TARIQ/The Star

Also, a pilot project by local company Average Drone tested drones for food delivery in Cyberjaya at the end of June.

Bernama reported that the drone food delivery service, Express Food, covered a 2km radius around the Futurise Centre in Cyberjaya. It promised to deliver up to 800g of food within 12 minutes of ordering, and the delivery charge was just RM2.50.

However, not all companies have such a cheery outlook towards drones.

Ikramatic Systems Sdn Bhd has developed the Secudome Anti-drone shield, a device which can disable drones by creating a field of interference to block their signals.

When set up in omni direction, it can create a 1km dead zone around the device while in single direction it can send out a blast to knock out drones as far as 3km away.

Once the device detects an intruding drone, it can jam the 2.4Ghz and 5.8Ghz frequencies, preventing it from being controlled by the user. 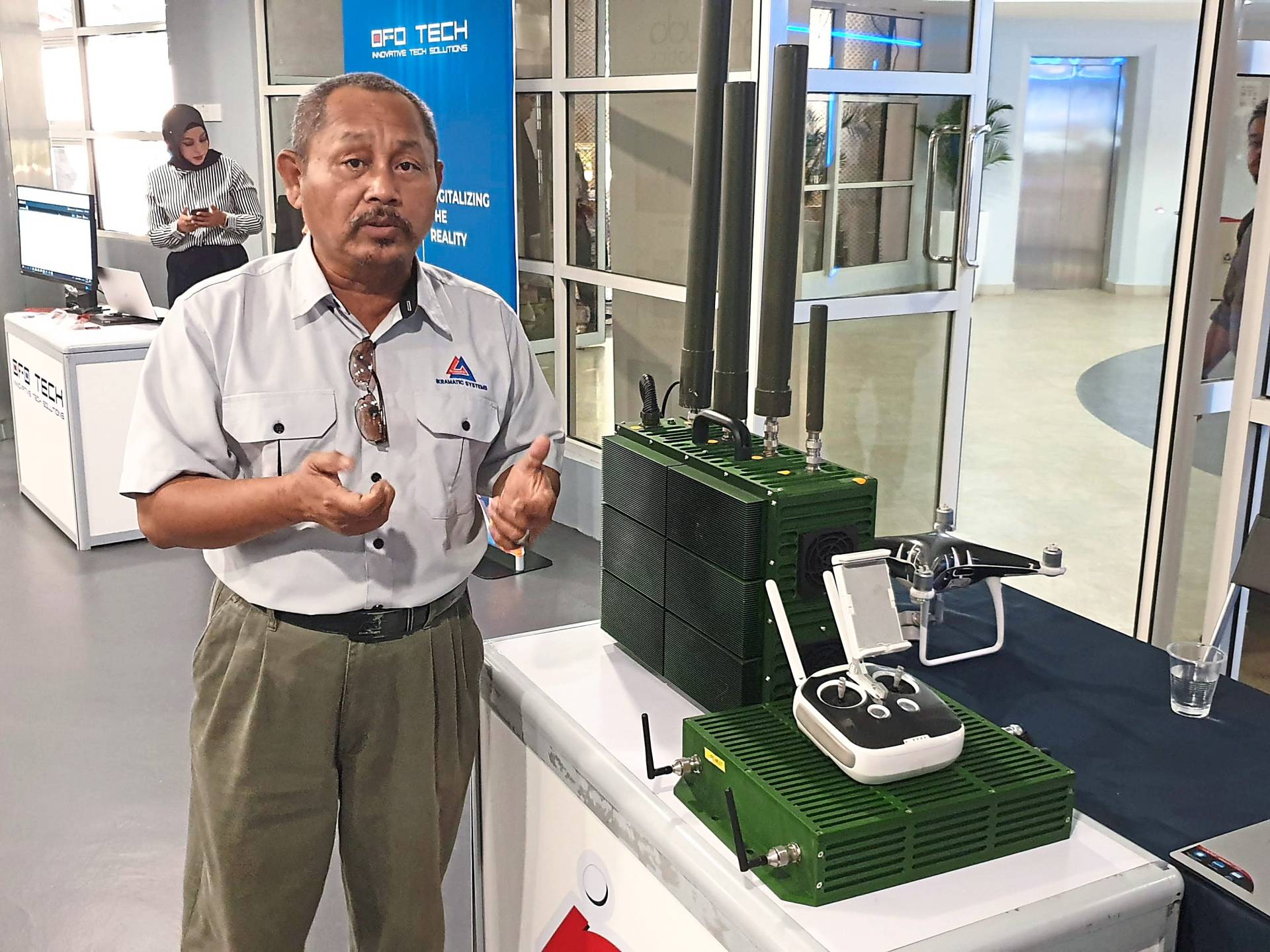 More companies are starting to use custom drones for different jobs. Avetics, for instance, employed drones to capture the Sepang F1 racetrack for use in a racing videogame. — Avetics

He added that while most consumer drones are equipped with safety protocols that would make them return to the user in the event they lose connection, most DIY drones would just crash.

"Companies like DJI have internal safety mechanism so people don't intrude into a private airspace, but here everyone is a champion, they'll try messing with the programming to fly where they want," said Wahab.

The Secudome system can also disrupt the drone’s GPS (global positioning system), which could cause it to "lose direction".

He said so far the jammers have only been sold to government agencies, usually to protect restricted areas like army compounds, police stations and prisons.

Though no units have been sold to civilians, they are up for purchase.

However, potential customers would have to get permission from the Malaysian Communications and Multimedia Commission (MCMC), the regulatory body in charge of frequency bands, to operate it.

Asked why a standalone unit is preferable to a gun-like drone disabling device, he explained that the latter emits large amounts of RF (radiofrequency) electromagnetic radiation which could be dangerous to humans, especially if held by hand. On Oct 4, Reuters reported that a drone disrupted a Europa League football match for around 15 minutes in the Josy Barthel stadium in Luxembourg.

Match officials suspended a match between the home team F91 Dudelange and Azerbaijani club Qarabağ FK when they spotted a drone carrying a controversial flag over the pitch.

The Qarabağ players tried to take down the drone by kicking balls at it but it’s unclear if they succeeded.

Closer to home, AFP reported on June 25 that drones were sighted near Singapore's Changi airport for the second time in a week, forcing its Civil Aviation Authority to once again delay and divert flights headed to the bustling airport.

It is against the law in Singapore to fly a drone within 5km of an airport without a permit.

Drones are also increasingly disrupting flights at airports around the world. London's Gatwick was paralysed for 36 hours last December following repeated drone sightings, with tens of thousands of passengers affected.

Subscribe now to our Premium Plan for an ad-free and unlimited reading experience!
Drones Technology