Design-wise, the Mate 30 Pro comes with a narrow notch, slim bezels and an edge-to-edge Horizon Display, which curves at an 88° angle, to maximise the screen real estate. — Photos: KHOR SOW YEE/The Star

Huawei has unveiled its latest flagship smartphones, the Mate 30 and Mate 30 Pro – along with a Mate 30 Pro Porsche variant and a Mate 30 Pro 5G model – at a launch event in Munich, Germany.

The Mate 30 range is powered by the new Kirin 990 SoC chipset. The 5G models, however, are powered by the Kirin 990 5G chipset – the first to integrate both processing units and a 5G modem on the same chip – making these devices the "world's first second-generation 5G smartphones that support 4K video calls", claims Huawei.

"The era of 5G is an opportunity to rethink the smartphone technology and the Huawei Mate 30 series is the ultimate expression of what's possible," said Huawei consumer business group CEO Richard Yu.

Design-wise, the Mate 30 Pro comes with a narrow notch, slim bezels and an edge-to-edge Horizon Display, which curves at an 88° angle, to maximise the screen real estate.

It has also eliminated the side volume buttons and replaced them with virtual keys, allowing users to position them on either side of the phone – a handy feature for both left- and right-handed users.

The Mate 30 series sports a triple/quad camera system, with a ring design surrounded by a metallic “halo”. The smartphone also boasts optical image stabilisation (OIS), along with laser focus, which together are capable of 2.5cm macro photography and max ISO of 204800.

The SuperSensing camera features a dual main-camera system with a max video ISO rating of 51200 to capture videos at super slow-motion at up to 7,680fps (frames per second), as well as 4K ultra-wide angle low-light time-lapse video and real-time Bokeh.

The second of the dual-camera system promises brilliant results in low-light conditions with ISO 409600 light sensitivity. 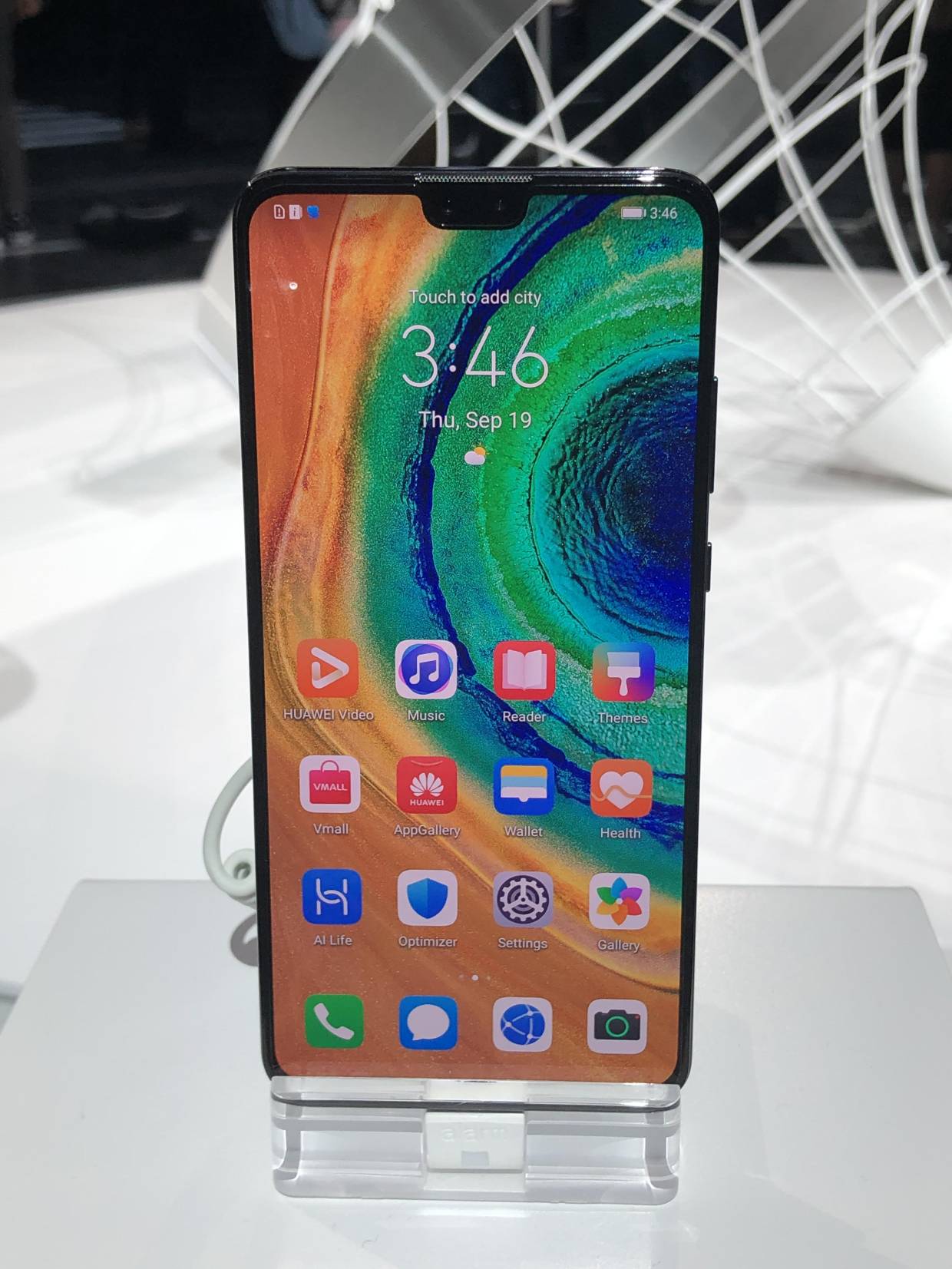 The Mate 30 boasts optical image stabilisation (OIS), along with laser focus, which together are capable of 2.5cm macro photography and max ISO of 204800.

Huawei says that the 8-megapixel camera on the phones offer 3x optical zoom, 5x hybrid zoom and up to 30x digital zoom.

The front-facing camera also comes with 3D depth sensing that is purportedly able to deliver pro-Bokeh effects with accurate depth-of-field info for selfies and portraits.

Other features include an always-on display with a lock screen that changes colour throughout the day, AI gesture control for contactless interaction, HiCar smart travel for seamless connectivity with a car's on-board communication and entertainment systems, 3D face unlock and in-screen fingerprint sensor (Mate 30 Pro only). Huawei has eliminated the side volume buttons and replaced them with virtual ones on the Mate 30 Pro (pic) and Mate 30.

Local prices and availability have yet to be announced.

Besides the Mate series, Huawei also announced the Watch GT 2, which is powered by the Kirin A1 chip and boasts a claimed battery life of 14 days per charge.

It will also come with new functions such as 15 smart workout modes with 10 training modes just for running, an enhanced music player, and the ability to answer voice calls on the watch via Bluetooth.

The black and white versions of FreeBuds 3 will be available in China, Europe, Middle East, Russia, Asia Pacific and Latin America from November at €179 (RM850).

One more device that was revealed was a TV dubbed Huawei Vision, with a 4K quantum dot screen (55in, 65in, 75in) and refresh rate of up to 120Hz, as well as "perceptive AI-eye" function with AI video call, face recognition and tracking features, and control centre for smart home devices. However, no pricing or availability was announced.