Around 80 nations have already adopted the latest format of biometric passports as a recommended requirement by ICAO for security reasons. — AFP Relaxnews

At least three Asian firms have communicated their grievances to the Department of Passports, saying that the bidding process lacks a level-playing field and favours European and American firm

"Some Asian and one European firm have sought clarification over various specifications in the tender documents,” said Ram Kaji Khadka, director-general of the department.

According to Khadka, the companies have inquired about the experience criteria, along with the provision of chip facilities, personalisation centres and other facilities that the Government of Nepal will be responsible for.

"We invited a competitive bid as per the provisions set by the International Civil Aviation Organisation so that we can provide tamper-free biometric passports. We do not want to compromise on quality,” said Khadka.

Around 80 nations have already adopted the latest format of biometric passports as a recommended requirement by ICAO for security reasons.

One major cause for concern for Asian firms is a clause that only allows bids from companies that have printed more than five million passports in at least three countries within the last 10 years, confirmed officials at the Department of Passports. According to the complainants, this is an unreasonable clause as it weeds out most Asian firms since many countries in the region are supplied with passports by European and American companies.

None of the bidders from India and China are fit to contest based on these conditions, according to officials at the department.

"At least three firms from Malaysia, South Korea and Singapore have already communicated their grievances to us,” said one official at the department who did not wish to be named. "Them, along with others, are likely to submit their complaints in written form during a pre-bid meeting scheduled for Sept 25.”

The printing of five million biometric passports is a lucrative deal, costing over Rs10bil (RM586mil), and is likely to receive bids from over half a dozen international companies. The Department of Passports invited global tenders on Aug 27 and interested bidders have already begun submitting their bid documents. Interested companies have 45 days to submit the final bid.

As per the general rule, at least three firms can compete in the bidding process or should qualify otherwise the bid process will be cancelled and recalled later after simplifying the specifications.

"All companies made separate presentations at the Department of Passports before we announced the global tender so we hope that they will compete in the bidding process,” said the official.

Since the bidding process is digital, officials do not know how many bidders have applied yet, which will only be known after the 45-day deadline, according to the official.

Nepal introduced machine-readable passports in 2010, replacing the decades-old handwritten passport as per a mandatory ICAO provision. Though the Department of Passports has called for a competitive price for each passport copy, it is not clear how much one copy would cost in dollars. The firm quoting the lowest price will win the bid, according to Nepal’s public procurement laws.

The department had earlier forwarded a proposal to the Ministry of Finance stating that it requires Rs8bil (RM469mil) to print next-generation passports for five years. The e-passport, made of polycarbonate with laser engraving, will cost more than the current machine-readable one. 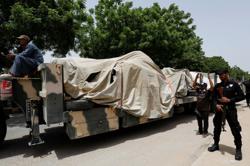