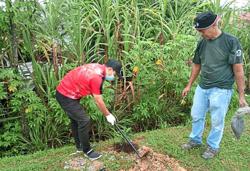 The copper-coloured disc lets you adjust the angle of the air stream. You have a choice of 10 speeds. — Photos: Dyson

This is probably the most unusual device yet from Dyson – a purifying fan that’s just for you. That’s right, this fan is not meant to be used by more than one person.

Pure Cool Me, as the name implies, does two things – it streams purified air for one person and also keeps you cool.

But as the range is limited – even compared to normal fans – it’s not meant to purify an entire room like the Dyson Pure Cool series.

So you are going to need more than one even if you are the only person living in your house if you plan to enjoy purified air in more than one place.

Unless, of course, you are okay with moving it around, as it’s much lighter and more compact than most fans. But before you decide, let’s talk about how it works.

The Pure Cool Me is as simple to set up as a fan – there really isn’t much thinking or assembly required.

Like other Dyson devices, it’s designed to look sleek so it only has one button which is for powering it up or down. The compact design lets you place it almost anywhere.

The rest of the functions are only available via the remote which is curved and compact, and cleverly designed to stick to the Pure Cool Me magnetically.

With the remote you can increase or decrease the speed, make it oscillate, set the sleep timer (30 minutes to eight hours) and check the status of the filter.

The only other thing that stands out is a tiny circular screen at the bottom that shows the speed – a sensor smartly dims or turns it off if it’s dark so the backlight is not intrusive.

Sadly, there is no app to control it because Dyson feels you don’t need one – as this is a personal purifier, you will always have to be close to it to enjoy it.

Just like clockwork, the haze is back. And if you think that’s terrible then here’s more bad news – the air in your house isn’t as clean as you think.

So the Dyson Pure Cool Me comes with a HEPA filtration system that is claimed to capture 99.95% of ultra-fine particles and allergens such as mould spores while the activated carbon traps gases and odours.

I didn’t have a device to test the air quality so I decided to go old school. I lit up a cigarette near the perforated bottom, which sucked up the smoke, and stood in front of the air stream.

Amazingly enough it didn’t blow smoke at me and instead what I got was rather clean air.

The other thing I like about the Pure Cool Me is that the air stream is focused – and a disc at the top allows you to adjust the angle of the air – so having it on the desk didn’t blast away all my papers and other stuff. The bedroom is one of the best places for the Pure Cool Me, as you’ll enjoy a night of clean air.

In case you are wondering, the purifier uses Core Flow tech which focuses multiple streams of air into a single strong stream, and it’s inspired by the Harrier Jet.

After using it in several spots, I have settled on the bedroom as the best place mainly because the Pure Cool Me, unlike a regular fan, is very quiet at low speeds so that helps me sleep more soundly.

Also, logically, I am unlikely to spend eight hours in a single spot other than the bed although the couch comes a close second.

Though a unit that purifies an entire room will make more sense to most people, the Pure Cool Me has its place. The Core Flow technology which powers the purifier is inspired by the Harrier Jet.

Frankly, I found it odd at first, but am starting to warm up to the idea that it’s a better choice for places where I spend a lot of time such as in front of the desktop PC or couch.

Of course, the Pure Cool Me, like any other Dyson product, doesn’t come cheap – it costs RM1,699.

And the filter, which is estimated to last 12 to 14 months based on eight hours of usage, is priced at RM299. How long it actually lasts though will depend on the air quality in your house but it’s super easy to replace.

The Pure Cool Me only comes in two colours – white/silver and gunmetal/copper. The latter gets my vote, and it’s ideal if you have dark furniture. However, this colour is only available at Dyson’s online store and the Dyson Demo outlet at The Gardens Mall.