Nicchi holding his Influencers Pay Double sign to remind some customers that he will not give them free ice cream in exchange for social media exposure. — Instagram

Influencers with social media exposure to exchange for free food, look out. CVT Soft Serve, an ice cream truck business based in Los Angeles, has introduced a new “Influencers Pay Double” policy, stating that anyone who thinks they deserve free ice cream because of their social media following, will end up paying twice the original price of the item.

“We’ve decided to make this thing official with signage. We truly don’t care if you’re an Influencer, or how many followers you have. We will never give you a free ice cream in exchange for a post on your social media page. It’s literally a US$4 (RM16.55) item...well now it’s US$8 (RM33.10) for you. #InfluencersAreGross,” CVT said in a statement on the Instagram post.

In an interview with Newsweek, Nicchi said he introduced the policy explaining that he felt that perhaps too many self-proclaimed influencers don’t actually have authentic followings on social media.

“I came up with the policy after being burned out on people trying to get free ice cream in exchange for their posts. LA is full of so-called ‘influencers’ with large followings that are actually fake because they most likely paid for likes and follows. Anyone can have a following if they want to pay for it. Google ‘social media bots’.”

He even criticised the sense of entitlement that some influencers have when they ask for free ice cream at this business: “The 2019 version of ‘Do you know who I am?’ is ‘I’m an influencer’, but without the talent.”

The company have earned some positive feedback on Twitter for their “Influencers Pay Double” policy. In an earlier post, CVT Soft Serve has also criticised influencers for asking for free food from newly-opened restaurants.

Someone has to stand up to Big Influencer. And trust me, my buddy Joe @CVTSoftServe is legit annoyed by “influencers” even more than this Newsweek article could ever convey. #Hero https://t.co/mocP9E26yU

This guy's my new hero. https://t.co/kT0ltqkR3W 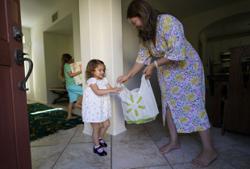