How 5G will unlock the industrial Internet, driving mobile connectivity

When 5G mobile services start to roll out worldwide from next year, smart cities such as Hangzhou are expected to get smarter.

In Hangzhou, capital of eastern China’s Zhejiang province and one of the country’s major technology hubs, evidence of the city’s smart infrastructure can be gleaned from how its public services function. Police officers are notified of major car accidents soon after they happen, traffic lights automatically adjust to changes in the volume of vehicles on the road, and in emergencies, fire trucks and ambulances are not stopped by a single red light until they arrive at the scene.

When 5G mobile services start to roll out worldwide from next year, smart cities such as Hangzhou are expected to get smarter as the next-generation wireless technology helps industries realise the full potential of the Internet of Things (IoT).

“From 2G to 3G to 4G, all of them serve people,” said Cui Kai, a Beijing-based IoT analyst with technology research firm IDC. “But 5G, from the beginning of its infrastructure design, has the Internet of things in mind.”

IoT envisions a self-configuring, adaptive and complex network that interconnects physical objects, each containing embedded technology to communicate, gather data and interact with mobile applications or other networks.

The stakes are high for industries around the world, as global spending on IoT is forecast to exceed US$1tril (RM4.1tril) in 2022, up from an estimated US$745bil (RM3tril) this year, according to IDC, which says adoption of IoT is happening across industries, in governments and in consumers’ daily lives.

Data generated by connected devices is now helping companies run more efficiently and gain insight into business processes, while consumers’ access to data is changing how they are informed about the status of households, vehicles and family members, as well as their own health and fitness.

“The next chapter of IoT is just beginning, as we see a shift from digitally enabling the physical to automating and augmenting the human experience with a connected world,” said Carrie MacGillivray, vice-president for IoT and mobility at IDC, in a recent report.

That shift is likely to become apparent as 5G networks are rolled out around the world. With peak data rates up to 20 times faster than 4G, 5G will serve as “the connective tissue” for IoT, autonomous cars, smart cities and new mobile applications – providing the backbone for the industrial Internet, according to a Deloitte report.

On the consumer side, 5G smartphone users will be able to send high-resolution 4K video within a few seconds, and both video games and apps based on augmented and virtual reality technologies will be seamless.

5G networks will also be able to support the growing number of connected devices globally, from fitness-tracking watches to Internet-linked televisions and smart speakers at home.

The International Telecommunication Union, the United Nations agency overseeing development of the “IMT 2020” global standard for 5G, said the new wireless technology would support 1 million connected devices per square kilometre; 1ms latency (representing the nearly instant time a packet of data takes to get from one point to another); greater efficiency in terms of power and use of radio spectrum; and a peak data download rate of up to 20 Gbps.

The agency works in tandem with the 3rd Generation Partnership Project, an international collaboration of seven telecoms standard development organisations, which has approved the much-anticipated global technology specifications for 5G. That has kicked off work on initial deployments this year by some of the world’s largest telecoms network operators.

At the crux of many IoT applications is latency. For a YouTube viewer, it means the delay between clicking the play button and the moment when the video starts streaming. 5G networks will provide better latency than the average 50ms on 4G networks, enabling IoT applications that require near instantaneous data transmission such as remote surgery. 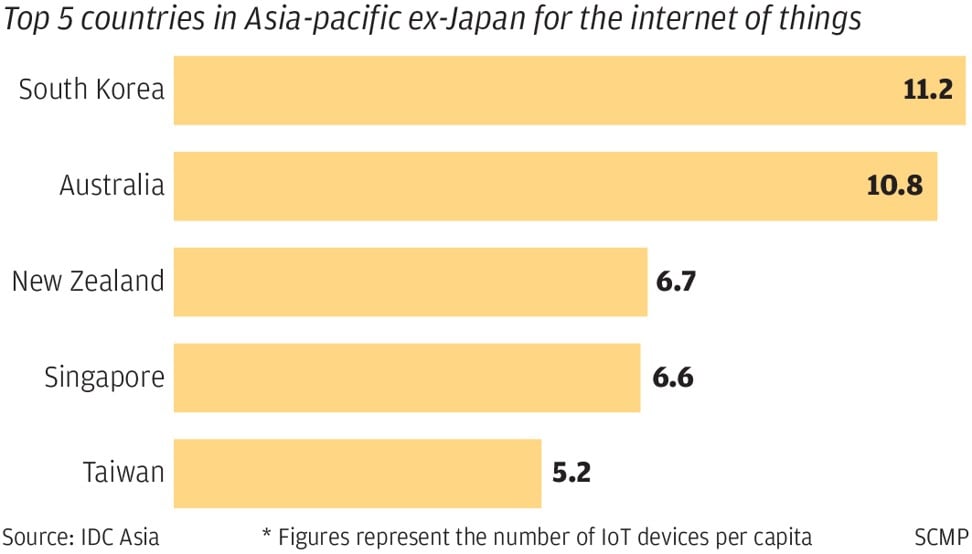 In March, China conducted its first remote surgery using robots with the support of a 5G network deployed by telecoms operator China Mobile and supplied by Huawei Technologies, according to state media.

During the three-hour procedure, a surgeon implanted a neurostimulator device into the brain of a Parkinson’s disease patient in Beijing with the aid of robotic arms, which were remotely controlled about 3,000km away. Remote surgeries are widely expected to enable more doctors to help their colleagues at smaller institutions or in disaster areas.

Low latency is also key to the smooth operation of autonomous vehicles. Sensors in a self-driving car gather information – from road conditions and nearby obstacles to traffic accidents along the way – and send the data to the car’s on-board computer or to a Cloud computing platform to make instant decisions. 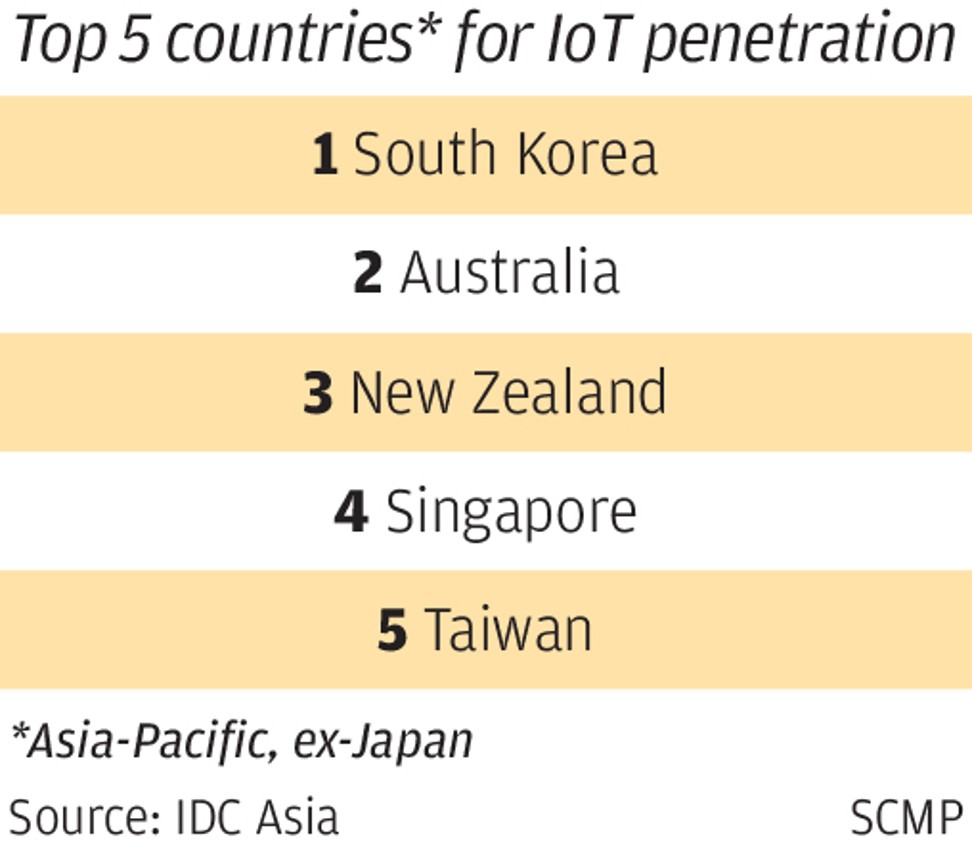 Seamless machine-to-machine communication would also be an important asset in military operations. A group of soldiers, for example, can wear smart wristwatches to know each other’s location and vital signs as they operate in a tropical forest in which satellite communications do not work.

While 4G now allows up to 100 devices to talk with each other simultaneously within a radius of 500m, 5G can handle a lot more devices using the same communications protocol, according to Wilson Chow, a telecoms analyst with PwC China.

While robots have already taken over the assembly lines in car assembly plants, 5G will allow someone sitting at headquarters to monitor the operations of dozens of factories in different cities in real time. That would be made possible by chips installed in fast-moving machinery, such as robotic arms and conveyor belts.

In February, Swedish telecoms equipment maker Ericsson and China Unicom unveiled their 5G-powered automation project at the Port of Qingdao in the eastern coastal province of Shandong. The initiative aims to slash 70% of labour costs in one of the world’s busiest container terminals.

“In the future, manufacturing plants and retailers can achieve efficiency with improved workflows because every data point will be gathered, processed and analysed in real time,” Chow said. 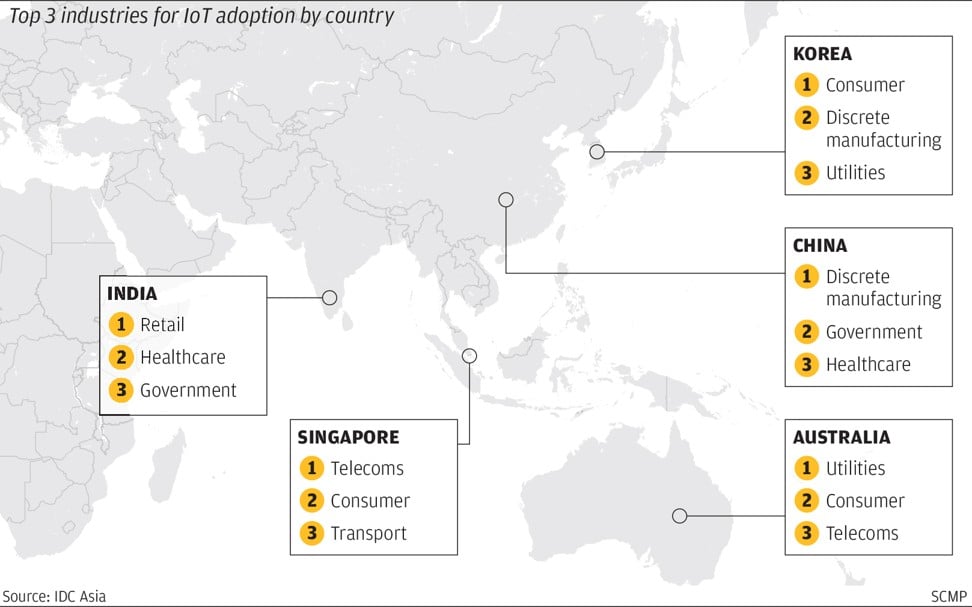 For consumers, 5G is expected to broaden the use of smart home devices such as voice-activated speakers and other advanced Internet-linked appliances. The global market for smart electric household appliances, for example, is projected to reach 1.5 billion units by 2020 when commercial 5G networks are online, according to data from analytics firm Dun & Bradstreet.

Such a trend will help grow the number of so-called smart homes to about 300 million worldwide by 2022, according to an estimate by ABI Research.

Technology giants such as Amazon.com, Google, Apple and China’s Xiaomi have already ratcheted up their efforts to churn out more smart devices, including speakers, vacuum cleaners and rice cookers, remotely controlled via smartphone apps or voice assistants.

With 5G, uniform network connectivity and even energy savings would be realised as these devices are linked to the Internet.

“Previously, you needed to think about how much data you could send between devices and the Cloud,” said Werner Vogels, chief technology officer at Amazon, in an interview last month. “With 5G, companies will no longer be constrained. Every device, even your clock on the wall, could become Internet connected.”

In China, which has the world’s biggest Internet population and largest smartphone market, the benefits of IoT adoption are expected to become widespread as 5G data consumption is encouraged by the government and telecoms operators, according to PwC’s Chow.

That would help take Hangzhou’s City Brain, a project backed by e-commerce giant Alibaba Group Holding, to the next level.

With 5G networks, Hangzhou’s City Brain will be able to process greater amounts of data gathered from a range of IoT units, including lamp posts, manhole covers and electricity meters. The advanced mobile infrastructure would enable sensors to be deployed in underground pipes to find water leakage.

“Every asset can be connected through the Internet,” said IDC’s Cui. “The key question is what’s the value of getting more data.”

China has an estimated 200 million surveillance cameras, which amounts to about one camera for every seven people. The combination of 5G and IoT resources could turn a smart electricity meter into a real-time surveillance tool to tell whether someone is at home or not.

“You can imagine after 5G is rolled out, China would like to make the whole country a smart country,” said PwC’s Chow. – South China Morning Post