After Typhoon Mangkhut wreaked havoc on the city last year, the observatory collected videos and photos of damage from social media users in Hong Kong.

Hong Kong forecasters are hoping the power of social media will help them become better at warning the public about the onset of typhoons, flash floods, and storm surges.

The Hong Kong Observatory wants local residents to post information including texts, pictures and videos of these events to its app, under a plan to help it send more timely warnings when threatening weather is approaching.

The constraints of traditional forecasting were thrown into sharp relief on Saturday when two people died after a sudden thunderstorm caught the city totally unprepared.

Facing public criticism over its failure to forecast the freak event earlier than it did, the observatory had to explain the challenge of predicting rainstorms during rapidly changing weather patterns.

“Between spring and summer, the development of rainstorms over southern China can be somewhat random, and often changes rapidly and is a great challenge for weather forecasting,” the statement said.

Shun Chi-ming, the observatory’s director, said it would add a function to its MyObservatory app allowing the public to report special weather phenomenon in the coming months.

“We will try to encourage some experienced and trustworthy members from the public to report extreme weather conditions, such as flooding, storm surge and fallen trees as long as they are safe, through the app,” Shun told the Post before the weekend’s freak event.

Shun said the forecaster would make use of the data to enable it to make to make better precautionary warnings and impact assessments.

“We are not just talking about conventional meteorological data,” Shun said, “We are also talking about data such as those we could extract from the internet and social media.”

The director said although the unconventional data such would be of lower quality, the significant amount generated could be used to fill in the gaps of conventional data gathered in the same region.

One of the reasons for such a move, Shun said, was because the impact of exceptional weather phenomena could be different depending on where people are.

“For typhoons, sometimes people feel no wind because they face different directions,” he said. “We want to use this data to help us venture into forecasting and warning of the weather impact.” 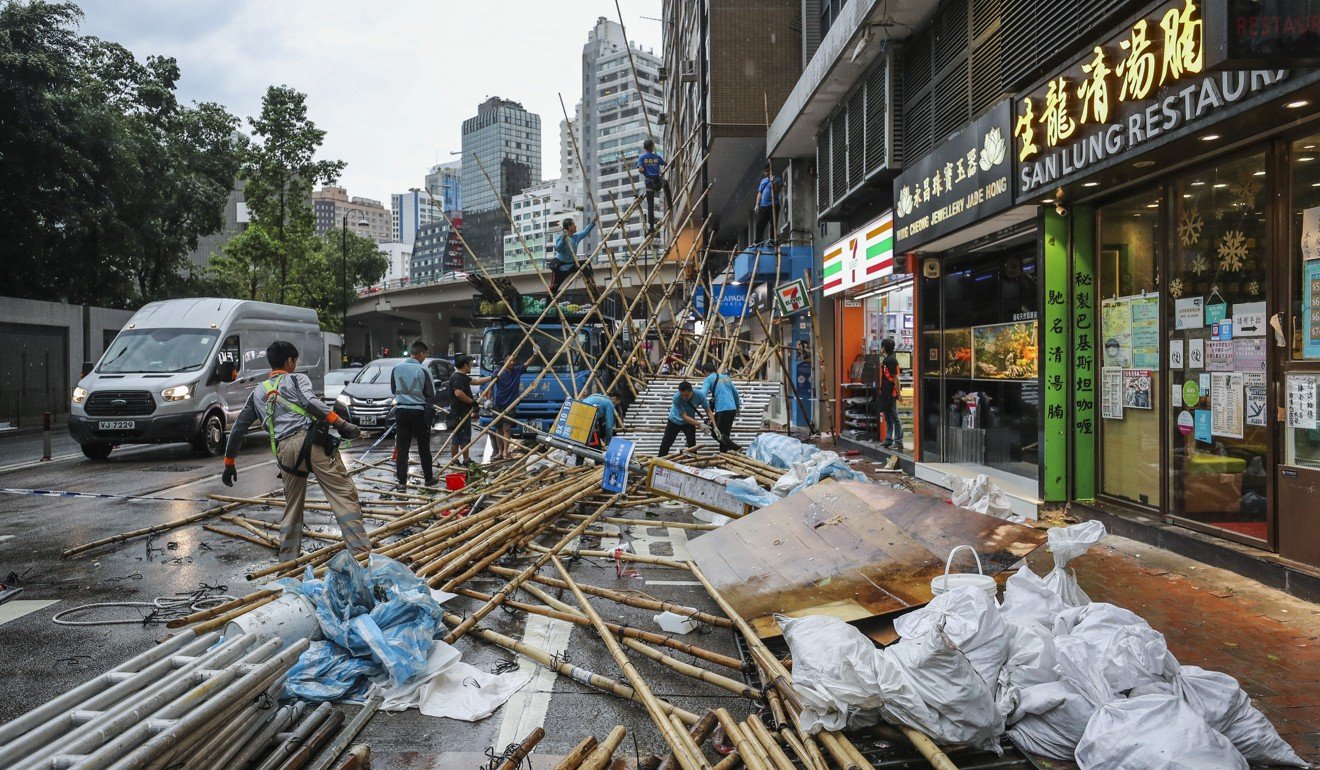 Because of the difficulties of verifying data sourced from amateur weather watchers, the report function will be limited to experienced volunteers from the observatory’s Facebook group, where some 7,500 members joined and shared weather information with photos and videos in its first phase.

The long-term goal is to engage more people to report and offer near real-time warnings to the public about extreme weather, such as tornadoes, which are fast-developing and can be very difficult to predict. 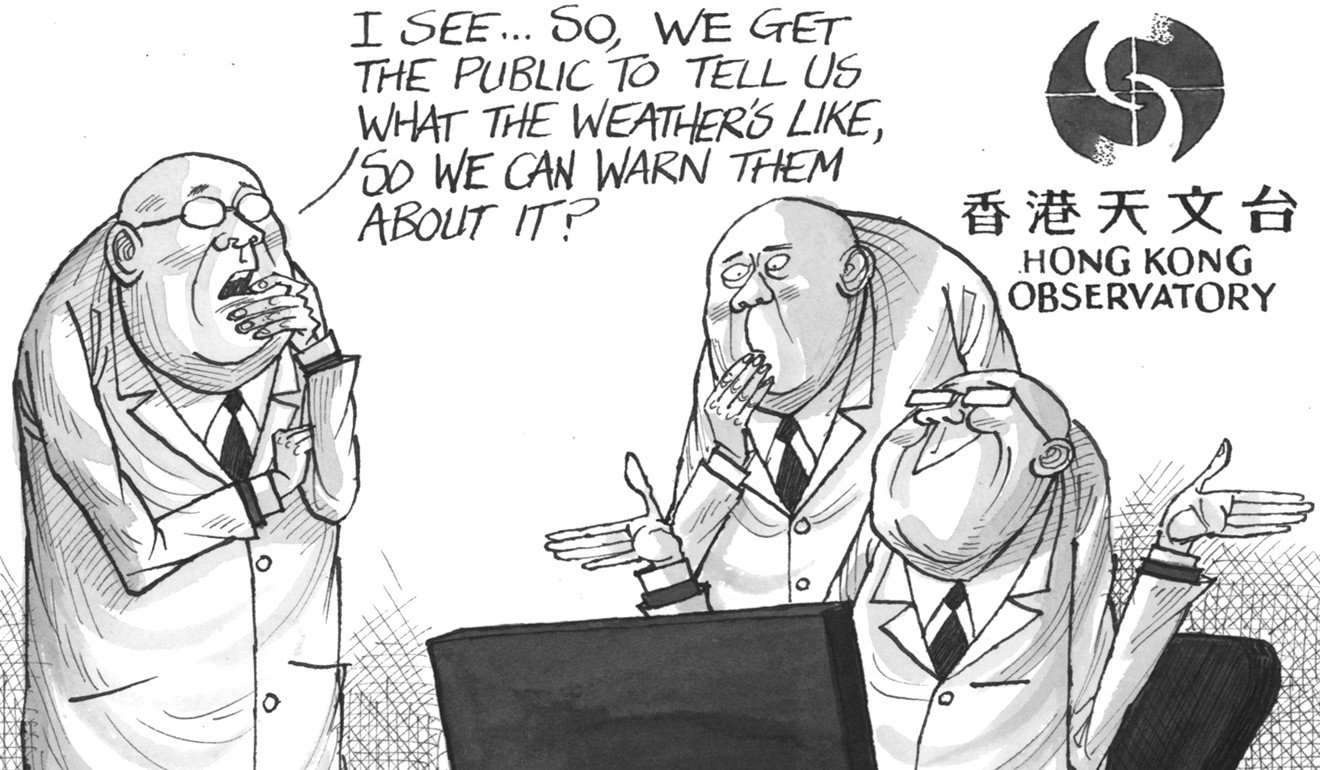 Shun stressed the importance of ensuring the authenticity of the data. The observatory has in the past warned the public about trusting rumours of typhoon signals on social media and WhatsApp groups.

After Typhoon Mangkhut wreaked havoc on the city last year, the observatory collected videos and photos of damage from social media users in Hong Kong, and made an interactive map highlighting the damage at different locations in the city.

“One advantage of crowdsourcing is that you can get information that most people may not notice,” said Lee Kwok-lun, acting senior scientific officer at the observatory.

Lee noted that the forecaster was able to collect footage about typhoon damage in remote areas, such as Ping Chau and Sai Lau Kong.

Shun also revealed that the observatory is in discussions with Facebook about the sharing of its local safety check data. Facebook users can report their safety on a certain disaster page with their geographic location.

Shun said the data would help them better assess the impact of disasters in the city. The plan to have members of the public supply information was first announced late last month.

He also warned earlier that the trend of climate change demanded everyone’s attention, as the city experienced its warmest winter since records began in 1884, with the mean temperature reaching 19.1°C.

“From this basic principle, the crowdsourcing data can help deal with climate change,” he said. – South China Morning Post

Pakistani man killed during TikTok stunt on train track
This connected mattress automatically corrects your posture while you sleep
And now, a reading from an email according to St. Paul
Mobile services in Russia suffer outages as police disperse anti-Kremlin protesters - monitoring site
TikTok under fire in Italy after girl’s death linked to challenge
Tesla’s Autopilot won’t achieve full autonomy, Waymo CEO says
Tablets: Who still needs them? Experts describe the ideal tablet user
Piano wire or poison? ‘Hitman 3’ is some of the darkest fun in gaming
Yes, Bernie Sanders is laughing at those viral inauguration memes too
Windows + D: The fastest way to see your desktop behind open windows