Strong, driven and female: Ladies are doing it for themselves in tech-related fields

Cropped shot of a computer programmer working on new code

From handling successful YouTube channels to developing mobile apps and videogames, women are making their presence felt in the so-called “male-dominated” industries.

They are striving to disprove that the Stem (Science, Technology, Engineering and Mathematics) field belongs to only men as they believe that gender plays no role in these industries or any other.

The best approach to breaking that notion, these women say, is to just keep doing what they do, and encourage more young girls and women to join them.

Here are a few women who have heard the term “male-dominated” too many times in their line of work, and still continue to succeed in their chosen fields.

With over 730,000 subscribers, Tan Jia Tong, 26, is one of the more prominent female YouTubers in Malaysia. She started as a blogger documenting her lifestyle before taking the plunge to start her own YouTube channel and finding success with DumplingSoda.

The channel, launched in 2015, features a variety of content from unboxing videos to food reviews as well as parodies and music videos, often garnering over 250,000 views each. Her Twice–TT Most Hairy Parody Ever! video even hit the 3.1 million mark. Tan is one of the most popular local YouTuber right now. — SIA HONG KIAU/The Star

“At first, I was producing content in English, following the trend back then before deciding to switch to Mandarin. I realised that I could reach a larger audience in this language because there’s a serious lack of local female YouTubers who produce content in Mandarin,” says Tan.

Her one-woman show blossomed into a crew of 10 hardworking young people driven to create fun, engaging content. They aim to publish at least two videos a week but it’s sometimes difficult to meet the requirement. Nevertheless, she has learned a lot along the way.

“I am the director, I am the editor, I have to understand how lighting works and more. There is not much sleep but it all pays off in the end,” says Tan, who receives many lucrative offers from sponsors and partners ranging from smartphone companies to fast food chain and skincare products.

“It’s good to be a woman in this industry now as there isn’t much competition locally. You could really use this time to shine and build your brand,” she says.

For those thinking about starting their own YouTube journey, Tan says that they have to be mentally strong, and showcase their true self to their viewers.

“Unfortunately, when you have a cute face in this industry, people may judge you as ‘a bimbo who sways her way to the top’. The Chinese community refers to these girls as Wang Hong (Internet celebrity in Mandarin).

That could be a hiccup in the earlier stage of one’s career, but don’t let that stop you,” she advises.

“You need to show people what is in your brain and heart, and YouTube did that for me. It helped me show people my real personality, and here I am today.”

As a child, Pauline Low was always intrigued with problem solving and puzzles, often wanting to figure out how things work and connect to one another.

Now a senior software developer with Sime Darby Technology Centre, she is in charge of troubleshooting and improving day-to-day operations in the company.

She is one of the few females on her team, but that doesn’t scare or stop her from doing her best as she loves her job. 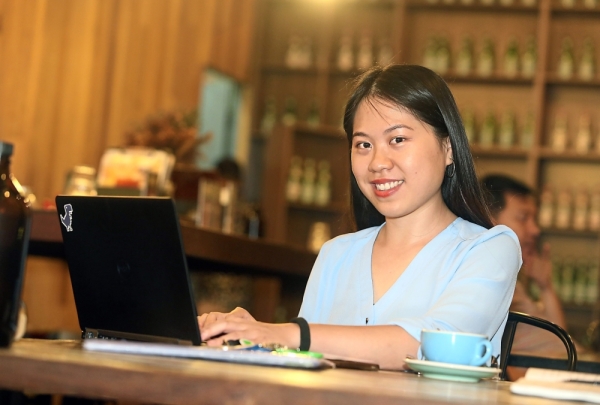 Low wants more spotlight on the work females do in the Stem field, as it’s wrongly ­depicted as a male-only ­industry. — IZZRAFIQ ALIAS/The Star

“I have created two mobile apps that are used for in-house operational activities, and I feel proud when I see the workers use them,” says Low, 28, who also provides the support for the apps.

When she tells others what she does for a living, they are always surprised. “It’s like they have seen a unicorn. Yes, it’s rare to see female programmers, but we do exist,” she adds with a smile.

Low feels that there needs to be more spotlight on the work females do in the Stem field.

“Even in fictional TV series like the popular The Big Bang Theory, the focus initially was on only the male scientists and engineers,” says Low. However, in the later seasons, strong female scientists were introduced, and women need to see more of that, she adds.

“We need to promote the success of females in the Stem field so young girls who hear or read such stories may be inspired to explore it for themselves,” Low shares. She admits that programming subjects could be tough, but it is tough for anyone regardless of gender. Even Low wanted to quit the Computer Science course when it got too difficult but she didn’t want to let a few tough subjects stop her from completing her studies.

And if creating “serious” mobile apps gets too tough or boring, there is always the lucrative career of making mobile games for a living, she adds.

“I haven’t had the intention to produce a mobile game, though I can if I wanted to. I just don’t have the right idea for it, but who knows, I may find one in the future,” she says.

Ninja Academy founder Dr Norshuhani Zamin believes that no one should be left behind when it comes to learning Stem subjects, hence her move to promote coding to children, especially those with special needs.She started an academy which organises workshops that introduces children to science and technology topics such as robotics, coding and app design in a fun and educational way, adding that they use online visual programming tools such as Scratch and Powtoon to teach the children.

“I want to create a more sustainable way of educating, where the students learn from creating things with their own hands using their own ideas. Coding is the new literacy that I hope more parents would introduce to their children,” she says. Norshuhani (left) and Nur Syafira run workshops where the students learn from creating things with their own hands using their own ideas. — IZZRAFIQ ALIAS/The Star

Norshuhani, 42, and her team of experts are also researching and developing tech-based learning tools that could be used in addition to Reka Bentuk dan Teknologi and Teknologi Maklumat dan Komunikasi subjects taught in secondary schools.

“We have also been working with teachers, creating programs that they could use in the classrooms,” says Dr Norshuhani, who believes that Stem subjects must not be labelled as ‘for boys-only’ and should be taught to children as early as possible.Nur Syafira Jamil, a software engineering student and a lead trainer at Ninja Academy, has always wanted to program “like a guy”.

“That’s because they are the only ones I hear about who are taking the course, and I wanted to challenge myself because I know I too could do it,” she says.

Nur Syafira’s interest for science and technology started when she was a kid, after she saw someone playing on a computer and was curious about how it worked.

“I really wanted to know what went on on the inside to make the things that happen on the outside of the computer, and found out about it from reading and learning from others. I’m happy that my parents didn’t stop me from pursuing my curiosity and career as a programmer.

“I think that it’s sexy for a woman to program. It’s nothing to be afraid of, and I want to inspire other women to be interested in the subject as well,” she says.

Life is a game

For someone who doesn’t play videogames, Ellie Yong is having a whale of a time being part of a team that makes them.

Yong is a concept artist at Metronomik, a local videogame company that is working on its maiden title, No Straight Roads, a game where players take on the role of an indie rock band fighting against an electronic dance music empire.

“I started drawing because it gave me an excuse not to talk to people. I knew my career would involve art, but I didn’t think that it would involve drawing characters for videogames,” says Yong, 26, adding that she creates the characters based on the requirements of the game and as instructed by the developers.

Her colleague Jan Teo is a 3D modeller, and is responsible for making the characters designed by Yong and other artists on the team come to life. 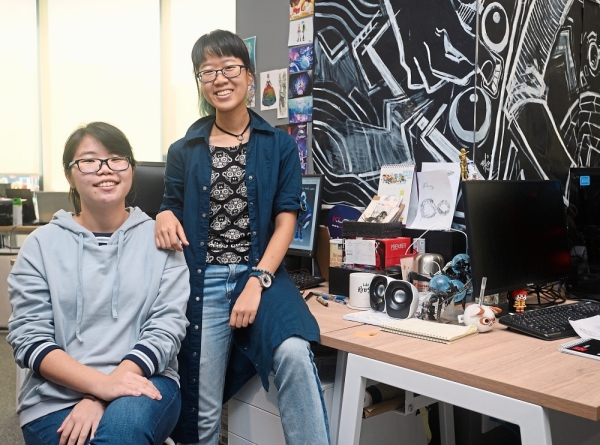 Yong (right) and Teo feel that the videogame industry is an ever-growing one and more women should take the ­opportunity to be a part of this world. — SIA HONG KIAU/The Star

“I was always interested in drawing but realised that there’s more to it – I could make them move and that made it more interesting,” says Teo, 23.

Yong studied Illustration and Entertainment Art while Teo took Digital Animation at The One Academy, and they recall that the majority of students in their respective courses were males.

It could be intimidating for some female students but they shouldn’t let that stop them from pursuing their dreams if they want to learn the course, says Teo.

There have been many stories about gender discrimination in gaming companies, but the duo says that is not the case at their workplace.

“Gender is secondary here. We are all given an equal platform, and our boss and colleagues have never made us feel that our ideas are not important because of our gender,” she says.

“I guess we lucked out with our workplace. Our boss won’t let us work past 7pm and pushes us to have a healthy work-life balance,” adds Teo.

They hope that more girls and young women would explore career opportunities in videogames as there is a misconception that it is only for men and those who play games.

“This is an ever-growing industry and more women should take the opportunity to be part of this world. It’s something else,” says Yong.

Jinny Saw is used to being the only girl on the field flying her racing drone among men, some who she says still don’t see her as a serious competitor.

“But that doesn’t bother me. I like to fly and race drones and that is why I will continue to do so for as long as I want,” says Saw, 20.

“I met so many female drone racers who are good at what they do, determined and work just as hard as the male competitors,” she says. Saw says that drone racing is all about skills and nothing to do with gender. — SHAARI CHEMAT/The Star

Saw says that drone racing is all about skills and nothing about gender, and hopes that others girls will approach the sport without any hesitation.

“I have friends who ask me why I play a ‘boy’ sport. What is the ‘boy’ part of it? The goggles? The drone itself? The aspect of flying? I don’t know what about drone racing is masculine,” she adds.

Saw assembles and repairs her own drones, having picked up the knowledge from the Internet as well as other racers. She has spent over RM10,000 on her passion, and is glad that her parents didn’t talk her out of it.

“It’s most probably because I saved up and used my own money to buy what I needed over time,” says Saw with a laugh. However, she says that it is important that young girls are not discouraged when they show an interest in flying or racing drones.

“One of the world’s top drone racers is a girl from Thailand. She’s only 11!” she says.

Saw doesn’t see herself stopping even if she doesn’t become a professional drone racer. “This is what I am interested in, and I’ll do it for as long as I can,” she says.