Retailers are shopping for ways to get rid of checkout lines

By MICHAEL LIEDTKE and JOSEPH PISANI

Cashier-less stores will not only save time but maybe money too, for both cost-cutting merchants and customers whose shopping habits are dissected.

Get ready to say good riddance to the checkout line.

A year after Amazon opened its first cashier-less store, startups and retailers are racing to get similar technology in stores throughout the world, letting shoppers buy groceries without waiting in line. If they work, cashier-less stores will not only save time but maybe money too, for both cost-cutting merchants and customers whose shopping habits are dissected.

"It could be scary, and it could be creepy," says Peter Trepp, CEO of FaceFirst, a Los Angeles company that so far has only sold its facial recognition tools to retailers trying to identify shoplifters and other criminals. "But if it's used to give people a 30% coupon on something they want that is going to be a nice benefit. That kind of experience will help people embrace the technology."

Amazon has a head start in the US, opening 10 convenience stores in three cities: Chicago, San Francisco and Seattle. The stores sell salads and sandwiches for lunch, everyday items like toilet paper and Advil, and groceries such as Cheerios and raw ground beef.

Shoppers scan an app to enter the Amazon Go store, grab what they want and walk out. Cameras and sensors on the ceiling track what's taken so their credit or debit cards are automatically charged when they leave. Shoppers will know how long it took to shop, since Amazon sends an alert with their shopping time.

"It was just a phenomenal experience," said Tom Hadfield, who bought a Coke Zero in a minute and five seconds at one of the Go stores in San Francisco while visiting the city recently. Hadfield, who runs a technology startup in Austin, Texas, said it reminded him of the first time he rode an Uber. "You just know it's going to be the future," he said. A shopper scans 'Amazon Go' app on cellphone while entering an Amazon Go store in Seattle.

Amazon doesn't say how much money its cashier-less stores make. But analysts from RBC Capital Markets recently visited Amazon Go's two San Francisco stores to come up with a number. Based on their observations of traffic patterns, they estimated about 400 to 700 customers per day will visit each Amazon Go stores, generating sales of US$1.1mil (RM4.4mil) to US$2mil (RM8mil) annually, assuming an average purchase of US$10 (RM40).

At the high end of that range, it works out to twice the sales of a typical US convenience store, RBC calculated.Several startups are pitching technology to retailers who want to create Amazon Go-like stores of their own. One of the companies, called AiFi, says it has signed deals with the Carrefour chain in France and Zabka convenience stores in Poland.

Others, including Zippin, Grabandgo, Trigo Vision and Inokyo, say they are negotiating deals with retailers in the US and other parts of the world, although none are ready to identify them yet.

"Once a few big retail chains begin to deploy this technology, it's going to snowball and we will see more and more of them doing it," says Michael Suswal, co-founder of Standard Cognition, another cashier-less technology startup.

So far, companies working on the technology are finding ways to do without facial recognition. Their systems rely on cameras for identifying objects rather than people. Like Amazon, they rely on tailored smartphone apps to identify who is entering the store and to process the sale for whatever products are taken.

Both Standard Cognition and Zippin opened small stores in San Francisco last year that have held invitation-only demonstrations or been open for limited hours with a scant selection of merchandise.

"I like the idea of being able to come into a store, grab what you want and just walk out," says Tomonori Nishimura, a 30-year-old researcher for Fujitsu Laboratories after getting a bag of Funyuns at Standard's small store in San Francisco recently.

Amazon appears the most likely to make cashier-less stores a more common sight, partly because it can afford to open stores with the technology already built into them, given its current market value of about US$800bil (RM3.2tril) – ranking among the most valuable companies in the world. 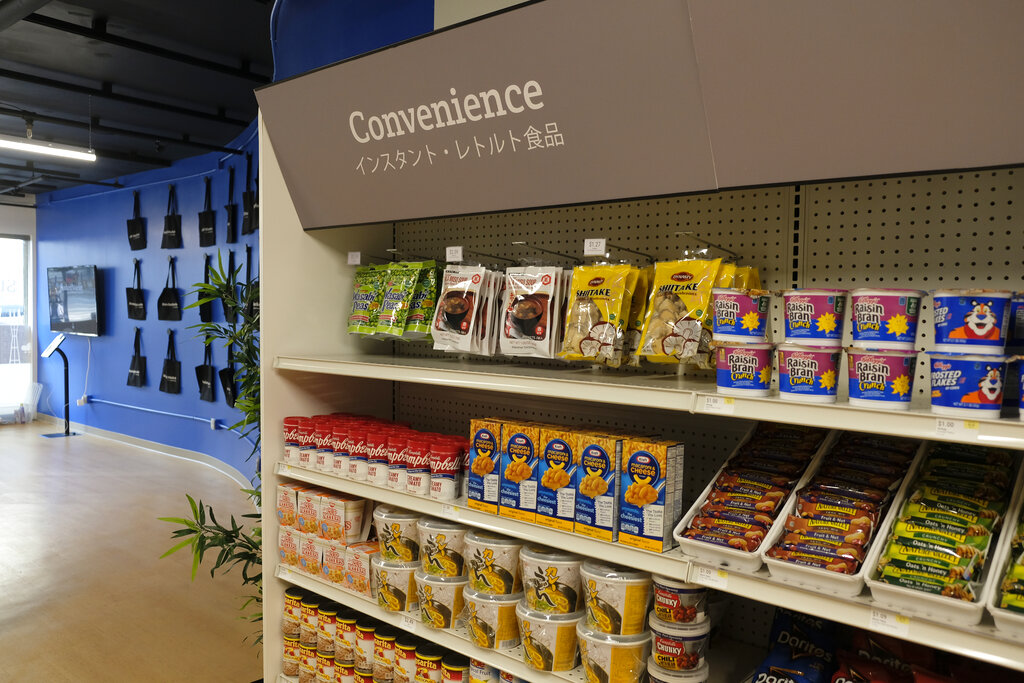 The interior of the Standard Cognition cashierless-store in San Francisco.

But the country's biggest retailers are also trying to speed up the shopping process. Sam's Club, the warehouse-style club owned by Walmart, opened a test store in Dallas that has no cashiers. Instead, shoppers use their smartphones to scan products and pay. 7-Eleven is testing something similar at 14 stores in Dallas."Waiting in line is torture," says 7-Eleven's Gurmeet Singh, the company's chief digital officer and chief information officer.

Though, he added, there are no plans to get rid of cashiers. He wants people to have a choice on how they pay.

As cashier-less stores become more common, there will likely be more political pressure to ensure they still offer an option to pay by cash to avoid discriminating against lower-income consumers without bank accounts and credit cards. In anticipation of that likelihood, Standard Cognition already has set up a separate kiosk for all-cash purchases in its test store.

RBC believes Amazon eventually will also introduce its cashier-less technology in its Whole Foods supermarkets, though Amazon says it has no plans to do so. For now, Amazon seems to have its eye on smaller stores: Late last year it introduced a 42sqm version of Amazon Go that can be plopped into office buildings or hospitals, like a walk-in vending machine.

"Within five years, I think just about everyone will have experienced what autonomous checkout is like," says Suswal of Standard Cognition. "And within 10 years, regular checkout stands will be very rare." – AP