According to her LinkedIn profile, Surina Shukri is a venturer and growth catalyst based in New York. — MDEC

Communications and Multimedia Minister Gobind Singh Deo has announced the appointment of Surina Shukri as the new CEO of the Malaysia Digital Economy Corporation (MDEC).

The minister made the announcement via a statement that Surina’s appointment as CEO, effective tomorrow (Jan 16), is for three years.

She built a big part of her career in the United States – she has about 20 years of experience working in multinational companies like JPMorgan Chase & Co and startups in industries such as financial, natural resource, energy and technology.

“MDEC has successfully led the construction of the digital economy ecosystem in the country and has brought a lot of benefit to the people,” said Gobind.

“I am confident that Surina will strive to continue building MDEC with her leadership, wealth of experience and take MDEC to a higher level. Not only in Malaysia, but on a global stage as well.” 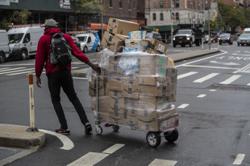