YearStarter2019: All games and all play

The game industry in Malaysia will see a boost in 2019 if all ourlocal game developers are as enthusiastic as this bunch.

WHEN Wan Hazmer Wan Ab Halim left Japan at the pinnacle of his career as the lead designer in the Culture team for the insanely popular and successful Final Fantasy XV videogame to start his own game company, critics thought he was crazy.

That didn’t stop him – his company Metronomik has yet to officially launch its first game, No Straight Roads, but it’s already starting to win awards – last year it snagged the Grand Jury Award at the 2018 SEA Game Awards and Indie Game Excellence Award from 4Gamer.net.

“We spent 2018 developing No Straight Roads, a musical game where players take on the role of an indie rock band fighting an electronic dance music empire. We have had demos in Tokyo, Singapore, Paris and Kuala Lumpur and the response has been overwhelmingly positive,” says Wan Hazmer.

The studio is looking to launch the game in the second quarter for the PC and PlayStation 4, and is now considering Nintendo’s Switch.

“We will test it on Switch and if we’re confident, we would release the game simultaneously on all three platforms,” he says.

Metronomik is one of the many indie game developing companies that is benefiting from the Malaysia Digital Economy Corporation’s (MDEC’s) Digital Content Fund which supports local studios in developing, producing or co-producing games and animation. Clockwise from left: Shahrizar Roslan, Jeremy Ooi and Shahazmi Roslan of Kaigan Games are excited to bring more challenging mysteries for their players to solve on Simulacra 2. — AZHAR MAHFOF/The Star

MDEC has always been vocal about pushing Malaysia as the regional game hub of South-East Asia, what with the game industry recognised as one of the fastest growing sectors in the world.

The indie game makers thrive in a co-working area in Kuala Lumpur where they are allowed to use the space for two years for free, and also get MDEC’s support when they need to acquire development kits or get better exposure through events like Level Up KL.

“MDEC has been really supportive in our endeavours in the last couple of years,” says Kaigan Games game designer Jeremy Ooi. Kaigan Games is riding on the success of its horror mystery game Simulacra, available on Android and iOS mobile platforms, as well as PC and Mac. It has “very positive” recent reviews on Steam.

The game starts with the player finding the phone of a missing woman and needs to search the phone for clues to solve the mystery of her disappearance. It has been downloaded over 100,000 times and Kaigan Games is hoping to release Simulacra 2 this year.

“We’re in the midst of crunching out the storyline and dialogues, and finding ways to give the players what they want – complicated mysteries to solve,” says Kaigan Games developer Shahazmi Roslan.

Simulacra won the Best Mobile Game award at the Casual Connect USA 2018, the first game developed outside of the United States to get the recognition. 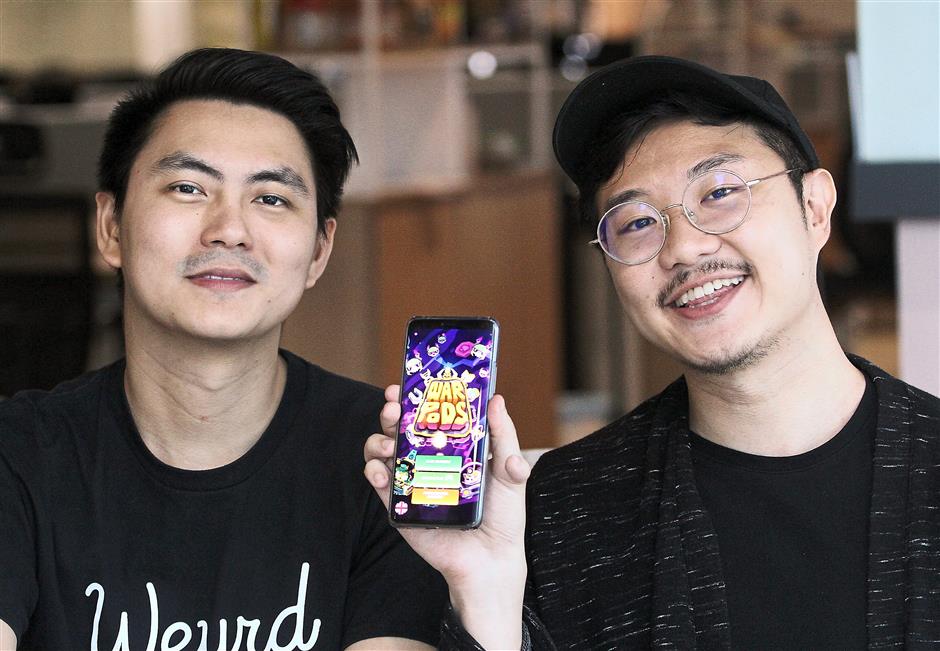 Enjoying a financial gain of RM100,000 in just three months after the game was launched is Weyrdworks. Its WarPods has been downloaded over 200,000 times, and to think that it was only meant to be a small game initially.

“It has now turned into a block breaker game with RPG (role-playing game), and it has new updates every week. WarPods was also chosen as Game Of The Day on Apple’s App Store in the United States, Britain, and South-East Asia,” says Weyrdwrks co-founder Shawn Beck.

His business partner JT Yean shares that they are currently working on releasing StrikePods – which will be set in the same universe as WarPods – sometime in the first quarter this year.

“We are just looking to expand the team this year, get more programmers and make more games. Last year had been really good to not just us, but probably the other game developers as well who get support from MDEC. I think that compared to other countries, the Malaysian government is doing more to help develop the game industry,” says Beck.

“The game industry is in the midst of elevating its standards internationally, and 2019 will be a year to watch out.”