WhatsApp-Reliance Jio representatives perform in a street play during a drive by the two companies to educate users, on the outskirts of Kolkata, India, October 9, 2018. Picture taken October 9, 2018. REUTERS/Rupak De Chowdhuri

JAIPUR, India: On a hot morning in India's tourist mecca of Jaipur, an open truck painted in the signature lime-green colours of Facebook's WhatsApp messaging service pulls into a dusty lane, where five men spill out and begin to perform a skit.

The event is part of a major grassroots effort by WhatsApp to battle fake news, which has triggered numerous lynchings in a country where 200 million people use the service, more than anywhere else in the world.

The actors soon draw a crowd as the play unveils how spreading misinformation online can stir up mob violence, especially in the countryside, where caste and religious prejudices run deep.

“Our society is better than theirs and that's why you should hate them,” says one, citing one example of an incendiary text circulating on WhatsApp in India. “If you are truly one of us, spread this message.” Such texts, pictures and videos aim to sow discord, warns another, as the viewers in the capital of India's western desert state of Rajasthan are then told how to identify forwarded messages and use WhatsApp responsibly.

The drive follows intense government pressure for both Facebook and WhatsApp to fight fake news and rumour-mongering that have led to more than 30 deaths in about 70 lynching attempts since Jan. 2017, data portal IndiaSpend says. A WhatsApp-Reliance Jio representative explaining how to use Facebook Inc's WhatsApp messenger to a woman during a drive by the two companies to educate users, on the outskirts of Kolkata, India.

The campaign is not entirely altruistic. It is being run in conjunction with Reliance Jio, the fast-growing telecom carrier controlled by billionaire Mukesh Ambani that recently made WhatsApp available on its US$20 (RM83) JioPhone.

Instructions on how to install and use the app on the JioPhone, which has connected tens of millions of low-income Indians to the Internet for the first time, are also a part of the 10-city roadshow.

Hundreds of people from WhatsApp and Jio are helping drive the campaign, with some WhatsApp employees having flown in from California, a WhatsApp spokeswoman said in an emailed statement, adding that the company did not reveal financial details. A source familiar with the matter said the costs were mostly being paid by WhatsApp.

WhatsApp's efforts to battle fake news in India include a limit on forwarded messages in a market where more users pass around messages, photographs and videos than any other.

It has launched newspaper and radio campaigns and tied up with Delhi-based non-profit Digital Empowerment Foundation to develop a digital literacy curriculum for India.

The company is also training police and law enforcement officials to use WhatsApp in helping them do their jobs. 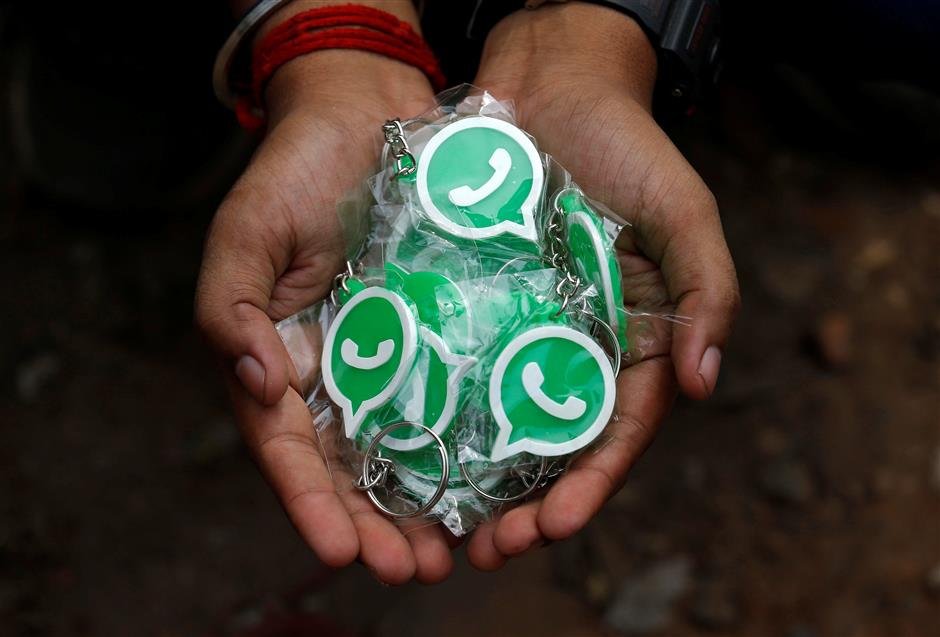 A WhatsApp-Reliance Jio representative displays key chains with the logo of WhatsApp for distribution during a drive by the two companies to educate users, on the outskirts of Kolkata, India.

“Our goal is to drive one of the largest coordinated public education efforts on misinformation to date anywhere in the world,” WhatsApp said.

India's technology minister has demanded the company do more, including working out how to trace the origin of “sinister” messages. But WhatsApp says it will not take such steps, which would require it to weaken encryption and other privacy protections. It is not clear how much the public information campaigns will change people's behaviour. But in Jaipur, at least some of the messages seem to be getting through.

“I learnt how to quit a WhatsApp group created by strangers,” said Bhawani Singh Rathore, a 35-year-old teacher, who began using the service just months ago and attended.

“And I also learned how to identify a forwarded message and to not send it ahead without checking its accuracy,” he said. – Reuters