Working at an Amazon warehouse in the UK, James Bloodworth came across a bottle of straw-coloured liquid on a shelf. It looked like pee.

How could he be sure? “I smelt it,” said the 35-year-old British journalist and author, talking about his new book Hired: Six Months Undercover in Low-Wage Britain. It was definitely pee, he said.

As he tells it, urinating into a bottle is the kind of desperation Amazon forces its warehouse workers into as they try to avoid accusations of “idling” and failing to meet impossibly high productivity targets – ones they are continually measured against by Big Brother-ish type surveillance.

It didn't help that the nearest bathroom to where he worked was four flights of stairs below. The warehouse floor is filled with the sound of machinery, although the robotic storage pods move almost silently. Overhead, conveyors move yellow totes with more goods.

Bloodworth's grim picture of Amazon's blue-collar workplaces – he compares the warehouse he worked in, alternately, to a prison and a totalitarian state – is bringing new attention to the company's treatment of its workers. Out in the UK since March, and just appearing in this country, Hired sparked a flurry of reviews in the British press and some American coverage as well.

Adding to concerns that have festered for years, Bloodworth's depiction arises as the company rapidly expands its warehouse operation, where workers store, pack and ship the items customers order online. Amazon last year said it employed 125,000 full-time workers in the US, 38% more than a year ago.

The company has not released worldwide employment figures, but said it has 175 “fulfilment centres”, as it calls its massive warehouses where goods come in and out, and 35 smaller “sortation centres” that finish off the delivery process.

“We don't recognise these allegations as an accurate portrayal of activities in our buildings,” the company said in a statement about Bloodworth's book.

The statement touted Amazon's above-minimum-wage warehouse pay (US$11/RM44 after two years in the UK and an average US$15/RM60 in the US) and benefits, including stock options for permanent employees.

“We are committed to treating every one of our associates (the term Amazon uses for its warehouse workers) with dignity and respect,” Amazon added. 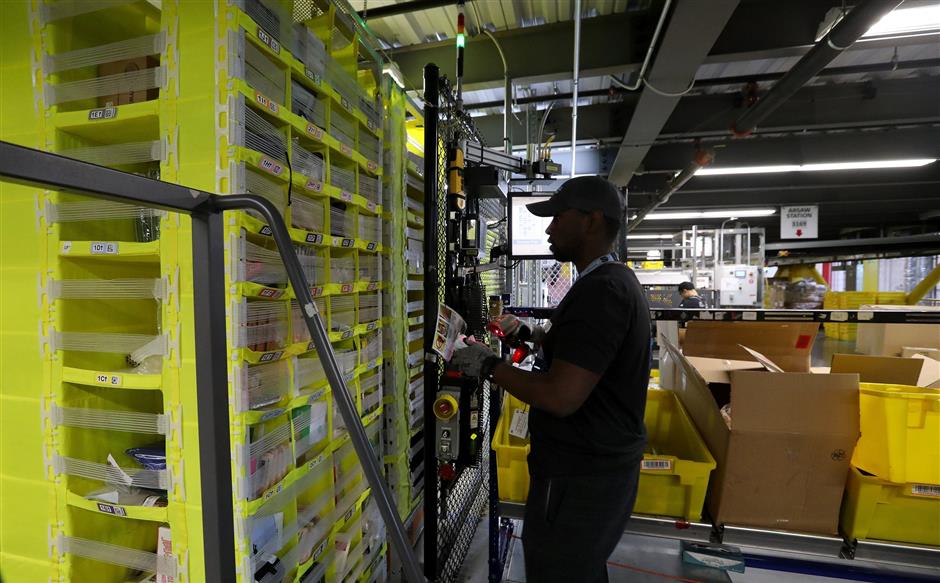 A worker scans items with a handheld device, then puts them in storage pods manoeuvred by robots.

There were, however, echoes of Bloodworth's book even on a warehouse tour in Kent with an Amazon PR manager looking on.

“We are allowed to go (to the bathroom),” said one worker, “but you can't stay for that long.” Four or five minutes is OK – “six minutes tops”.

Anyway, he said, if you spend too long, “the numbers start to bite you”, meaning the rate of tasks per hour by which workers are measured, will drop unacceptably.

Sheheryar Kaoosji, co-executive director of the Warehouse Worker Resource Centre, a non-profit in Southern California that advocates for better working conditions, said all warehouse employers try to get workers to do their jobs as quickly as possible. But because of the way Amazon uses technology, he said, “it's definitely a whole other level”.

Bloodworth said he spent several weeks at Amazon in early 2016 working the requisite 10-hour shifts, four days a week, at a warehouse in the West Midlands countryside. Seeking to write about the plight of the working class, he also worked at a call centre, as an Uber driver, on a building site and as a home aide caring for the elderly.

“Amazon was the worst employer, easily,” the author said by phone.

When he took a day off sick, he received a “point”. Earn six and you're fired, he said. Totes with packages in them are moved quickly to their next destination in the Kent warehouse, called a fulfilment centre.

Bloodworth said he heard of one person getting a point because she had to leave early to see her child in the hospital, and he talked to another who got a point for failing to hit her rate.

At the warehouse where he worked, Amazon monitored everybody's rate through a handheld device – tracking “our every move as if we were convicts out on house arrest”, he writes.

The device carried messages to workers and recorded how quickly they were picking or packing goods. “Your rates are down this hour, please speed up,” a message might say, according to Bloodworth.

“The productivity target was astonishingly high,” Bloodworth said, and it was always going up. To try to meet it, you had to run around the warehouse – at least if you were an “order picker”, as he was, tasked with collecting items from shelves to be sent on for packaging.

Yet, he said, you were not supposed to run, and could get a point for doing so.

“You couldn't not break the rules,” he said, especially if you were angling for a permanent position. Most of the workers he met were, like him, temporary.

Adding to the oppressive atmosphere, in Bloodworth's telling: Amazon's security measures to prevent theft, which entailed having workers go through airport-style metal detectors.

The author summed up his experience: “You were not seen as a human being. You were seen as a robot.”

How accurate is Bloodworth's description?

Amazon contests the number of shifts he worked – 10, according to a spokesperson. Bloodworth initially said 15, then took account of a half-day plus two days he missed for sickness and warehouse maintenance, and recalculated to 12 and a half.

More substantatively, the company said it employs mostly permanent workers, not temporary (outside of the Christmas season, at least), and has bathrooms “just a short walk” from where staffers work.

“We do not monitor toilet breaks,” the spokesperson said in a series of lengthy written responses.

One Amazon statement defended the company's sick-leave policies. “If someone is ill, we want to help them get back to work when they are fit to do so. We completely support our people, and use proper discretion when applying our absence policy.”

The statement did not say what its absence policy is.

In North America, the company spokesperson said when asked for specificity, the policy “varies from state to state, but we comply with all regulations”.

Also, according to the spokesperson, Amazon gives warehouse workers 20 hours unpaid time off every three months (adding to 10 hours when they start), 48 hours of paid personal time per year, and one week of paid vacation in the first year.

Regarding the targets that Bloodworth says bedevil and exhaust employees, the spokesperson wrote, “As with nearly all companies, we expect a certain level of performance from our associates and we continue to set productivity targets objectively, based on previous performance levels achieved by our workforce ... We support people who are not performing to the levels expected with dedicated coaching to help them improve.”

Bloodworth said he was chastised, not coached, when his numbers were down.

Back in the US

A tour of Amazon's Kent warehouse – a squat 850,000-square-foot building that runs on for several blocks in a sparsely populated part of the city – doesn't settle every contradiction.

But one thing is immediately familiar from Bloodworth's book: airport-style metal detectors. A sign tells workers what they can't bring in, including phones, keys and belts. 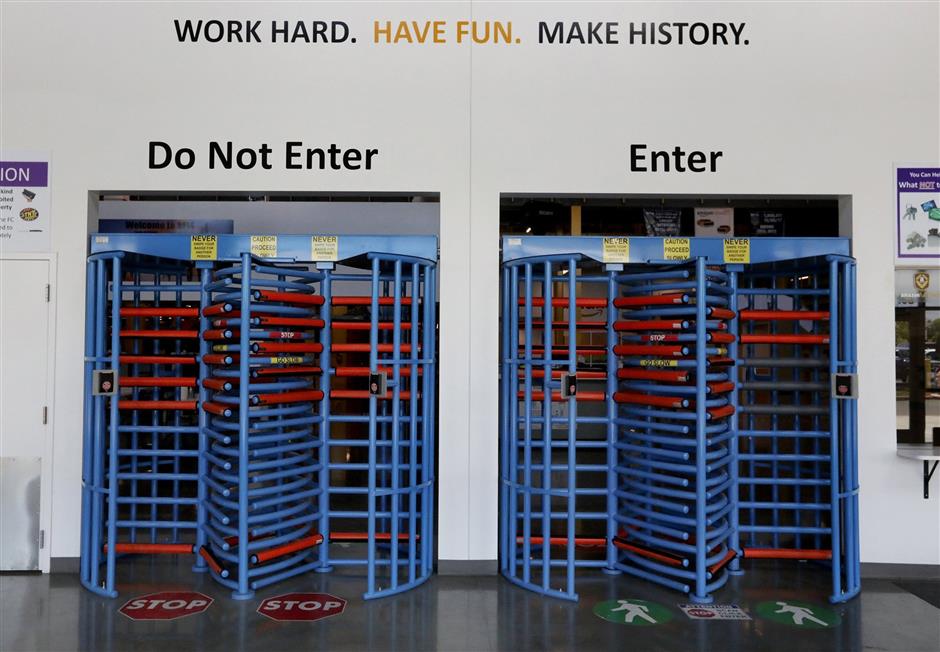 It's a highly secure facility with these turnstile entries and exits at the Amazon fulfilment centre in Kent, Washington.

Kaoosji, of the Warehouse Worker Resource Centre, said that's not true in his experience, based on conversations with warehouse workers from local employers such as Walmart and Home Deport.

Amazon's warehouses do have distinctive features the company likes to show off. Just beyond the entrance in Kent, Ross and Etches point out a classroom that is part of its Career Choice programme, where workers can take free vocational classes of all sorts.

And on an upper floor is a marvel of technological prowess: an area where big, rectangular storage units seem to move by themselves in some futuristic dance. In fact, small robots lie beneath the units, controlled by WiFi and turning their cargo around as directed. Twenty-five of its warehouses in North America use such robots.

Of course, humans work at the Kent warehouse, too, 2,500 of them. Technology dictates their work in a different way. Computer screens are ubiquitous, giving workers information about their tasks and running updates on their rate per hour.

A game, as Etches described it, was taking place on a screen in front of one worker, who was picking items from storage units and placing them in bins for later packaging. Each task she finished counted for a certain number of points, and her total was ranked along with those of other workers.

“Is it fun?” Etches asked brightly.

The worker hesitated slightly. “It's OK. It's fun,” she said.

A floor below, a woman packaging orders also used the word “OK” to describe her job.

Asked why she didn't stay home, she said, “If you don't have time to take a full day off, you don't leave.” And if you do, she said, you will be fired.

Would that happen right away or would you first have a conversation with a manager? Etches asked.

“I think you get an e-mail,” the woman said.

She also said workers were held accountable to something Amazon calls “time off task”.

“We've been told to watch how much time you're in the bathroom,” she said, echoing the worker who said six minutes was the limit.

“I think what she was talking about,” Etches said walking away, is that if people are in the bathroom “for an unusual amount of time,” someone might ask: “Are you OK? Everything all right?”

Amazon offers prizes to those who perform well. There are “power hours” when workers compete for “swag bucks” by picking up the pace. Winners exchange the bucks for Amazon T-shirts, caps and other items.

To be sure, not all workers find the rates oppressive. One said she had no problem meeting them. Another, who worked as a “problem solver” fixing orders that had gone wrong, didn't have any rates to meet and had quickly been promoted.

“It's the best job I've ever had,” said the 29-year-old problem solver, who previously worked at a Pizza Hut and as a part-time maintenance worker for a South King County city.

Kaoosji gives Amazon credit for offering better pay and benefits than some warehouse employers. Providing any health care at all, he said, is rare.

“Workers tell us that's what makes you stay,” he said.

He estimates he and his colleagues at the Warehouse Worker Resource Centre have talked to about 50 Amazon workers in the last year, and have also heard stories of unattainable rates and surveillance even of time spent in the bathroom.

Such conditions figured prominently in a survey of 240 Amazon warehouse workers carried out by the British advocacy group Organise. Seventy-four percent said they avoided using the bathroom for fear of missing their performance targets or receiving a warning point.

It's that kind of stress that makes some workers leave despite the relatively good pay and benefits, Kaoosji said.

Generally, he added, nondisclosure agreements required by Amazon, another unusual feature of its warehouses, keep workers afraid of speaking publicly about their experiences.

Bloodworth doesn't have that problem. Eventually, someone from the company found him in the warehouse and presented him with such an agreement, he writes. “On insisting it was something I needed to sign I decided straightaway to hand my notice in.” — The Seattle Times/Tribune News Service