Prom dresses breaking the bank? Bay Area teens have an app for that

Riya Gupta, 17, left, and Nishka Ayyar, 16, of Saratoga, shows off their website and app their built at Ayyar's home in Saratoga, Calif., on Wednesday, April 18, 2018. The junior high school students built the PromElle app designed for renting prom dresses to and from their users. (Ray Chavez/Bay Area News Group/TNS)

Two years ago, Nishka Ayyar was struggling, like many of her friends, to find a dress to wear to her first homecoming dance.

The dresses she saw in Bay Area stores and even online were too pricey for something she didn't think she would wear again, particularly since as a member of the homecoming court she needed something to match the green and yellow colour scheme.

So Ayyar and her classmate, Riya Gupta, at San Jose's The Harker School, solved the problem in Silicon Valley style by creating a peer-to-peer clothing rental app – a sort of Airbnb for prom and formal dresses.

“The boys on the court got to rent their tuxedos for a cheap cost,” said Ayyar, now a 17-year-old junior at Harker, a private school. “But we were forced to spend all this money.”

Plenty of other teens in the Bay Area – even those untethered by homecoming court colour schemes – have faced the challenge of finding the perfect dress to wear to a school dance. And a dress, which can run as much as US$800 (RM3,166), is just one part of the price of a modern prom.

About the time Ayyar was confronting her dress struggle, she and Gupta were taking a business class that assigned them to come up with an idea for a business that could solve a problem their peers were facing. The idea for PromElle was born.

Ayyar, 17, and Gupta, 16, who both live in Saratoga, say their peer-to-peer app can help a lot of teenagers: Girls who have bought dresses can recoup some of their costs or make a little extra money by renting out their dresses on the platform, while those searching for dresses can save money and room in their closets by renting from peers, often at a fraction of the cost. 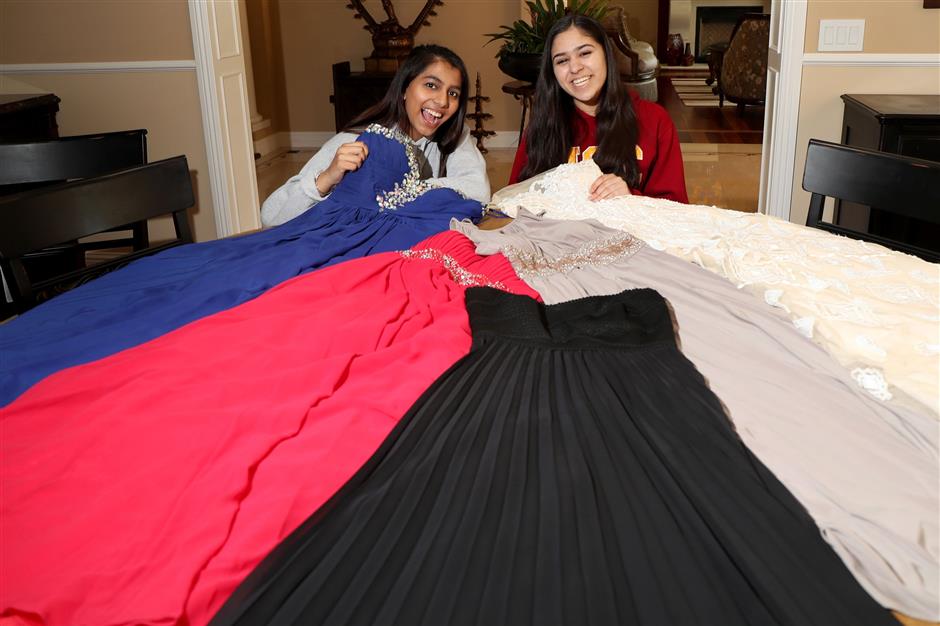 The two girls posing with prom dresses at Ayyar's home in Saratoga, California.

“People want to attend these events, but the dresses available online or in stores are extremely expensive,” Gupta said. “And typically they get a dress and won't wear it again in front of the same friends, so the dresses are going to waste.”

So the two worked on their idea in the spring of 2016, and launched the first public version of PromElle the following January. They raised about US$50,000 (RM197,915) in investment money from friends and family and hired a local coder to help build the app and website, which they designed themselves.

About 550 people have created accounts since the PromElle app launched in January 2017 – mostly teens in the Bay Area, though Ayyar and Gupta said it is available to anyone in the US.

It's not easy to balance the startup life with their high school class work. They have no staff, so Ayyar and Gupta manage the business with occasional help from their moms.

Through PromElle's app or website, lenders submit dress listings for review, upload photos and add details like the dress' size and fit. Ayyar and Gupta review each listing before making it public for renters to view. When renters find a dress they like, they tap to review the details, select a four-day or eight-day rental period, and pay through the app or website. Riya Gupta posing in a prom dress at her classmate's home in Saratoga, California.

Lenders get to pick their rental price, but Ayyar and Gupta recommend setting it at about 30% of original cost, which they say most users follow. Right now, for example, a green lace dress that originally cost the lender US$350 (RM1,385) can be rented for US$75 (RM296) for four days and about US$86 (RM340) for eight days.

PromElle's founders seem to have thought of everything, which they highlight in an extensive “Frequently Asked Questions” page on their site. What happens if a renter brings home a dress that ends up not fitting? She has 24 hours to cancel the order and get a full refund. What if the dress is returned damaged? Renters pay a small insurance fee – between US$1.99 (RM8) and US$4.99 (RM19.75) – to cover things like a small rip or stain. Irreparable damage, however, requires a renter to pay the full cost of the dress.

There are other apps that today's tech-savvy teens are using to help manage prom. Visa launched Plan'It Prom, which helps students create a prom budget. The average teen spent almost US$1,000 (RM3,958) on the event in 2014 and 2015, according to a study by Visa. Costs can include attire, limousine or car rentals, tickets, flowers, pictures, food, accommodations, the after party and the sometimes elaborate “promposal” – the term coined for asking someone to the prom.

“At our school, prom is really expensive. Tickets start at US$120 (RM475), then you put in the costs of dress and hair and makeup and pre-prom (parties or dinners), and it adds up a lot,” said Aditi Anthapur, 16, a junior at The Harker School who used PromElle to rent a dress for her winter formal last year. “It's helpful to have PromElle.” Nishka Ayyar posing in a prom dress at her home in Saratoga.

Anthapur said she liked PromElle's no-hassle approach to renting a dress – even last minute. “I found it accessible,” she said, noting that she rented a dress from another student at her school so picking it up was easy. There are plenty of dresses to choose from, she said, so there is not much worry about wearing a dress too similar to another dance attendee.

There are other clothing rental apps or websites for pricey formal wear, like Rent the Runway, which focuses on luxury brands and designers. But Gupta and Ayyar said that service seems geared toward an older crowd and is often still beyond the budgets of many teens.

Plus, PromElle's model provides a way for lenders to earn money.

Ayyar and Gupta earn money from the venture, too. For each transaction, about 20% of the rental fee goes to PromElle. Since not all of the users signed up have rented a dress yet, they've only made about US$550 (RM2,177) so far. But they've also received prize money from entering their business in competitions and they are working on marketing the app to more teens. A highlight for them was taking second place out of 17,000 competitors in the 2017 Diamond Challenge competition for high school entrepreneurs.

And though it makes for a busy life, Gupta said, “We wouldn't give it up for anything. We've definitely learned more about the different aspects of business from running PromElle than we would have from a course.” — The Contra Costa Times/Tribune News Service