Carol Smith can control the lights and the thermostat with Amazon Echo. She can ask Alexa to remind her to take medications, or even to call for help.

Nancy Delano, 80, of Denver has no plans to slow down anytime soon. She still drives to movies, plays and dinners out with friends. A retired elder care nurse who lives alone, she also knows that "when you reach a certain age, emergencies can happen fast."

So, when her son, Tom Rogers, talked to her about installing a remote monitoring system, she didn't hesitate. With motion sensors placed throughout the house, Rogers can see if his mum is moving around, if she's sleeping (or not), if she forgot to lock the door and, based on a sophisticated algorithm that detects behavioral patterns, whether her activity level or eating habits have changed significantly, for instance.

"It gives both of us peace of mind, particularly as she ages and wants to live at home," said Rogers, who lives near Washington, D.C. hundreds of miles away from her.

Alarm.com's Wellness system is markedly less expensive than options such as hiring a home health aide to check on her or moving her into a retirement community.

The exorbitant costs of nursing home and assisted living care are driving sales – and innovation – in the technology market, said Dr. Eric Topol, director of the Scripps Translational Science Institute and author of The Creative Destruction of Medicine: How the Digital Revolution Will Create Better Health Care.

For many, the technology offers not just the tools they need to continue to live at home, but newfound confidence and connectedness with faraway family and friends. Topol calls it "monitored independence" and it is changing how older generations age in America. "People want to be autonomous, irrespective of age," he said.

That was certainly the case for Carol Smith, 83, who lives in the Carlsbad by the Sea retirement community in Carlsbad, California, with her husband, Ray, 84. "I'm in a wheelchair, so I depend on my husband a lot," she said. The Smiths were introduced to the Amazon Echo last February through a pilot program for seniors.

Carol is now able to control lights and the thermostat. She can ask Alexa to remind her to take medications, or to call her brother or even to call for help. "It gives her a great deal of independence," Ray said. "If for some reason I have to be away, she's able to function on her own. It's keeping her safe, but closely related to that, it's allowing her to be independently safe."

AskMarvee, for instance, integrates with Amazon Echo via an online portal to allow seniors to immediately connect with family members for a quick check-in or if something more serious is going on. LifePod, to be introduced later this year, takes voice-assisted technology a step further, said Laurie Orlov, founder of Aging in Place Technology Watch.

It will allow users to engage with the device, much like Alexa, but will also periodically check in with them independent of a voice prompt, at pre-programmed intervals: Good morning, Nancy. Did you remember to take your medication? 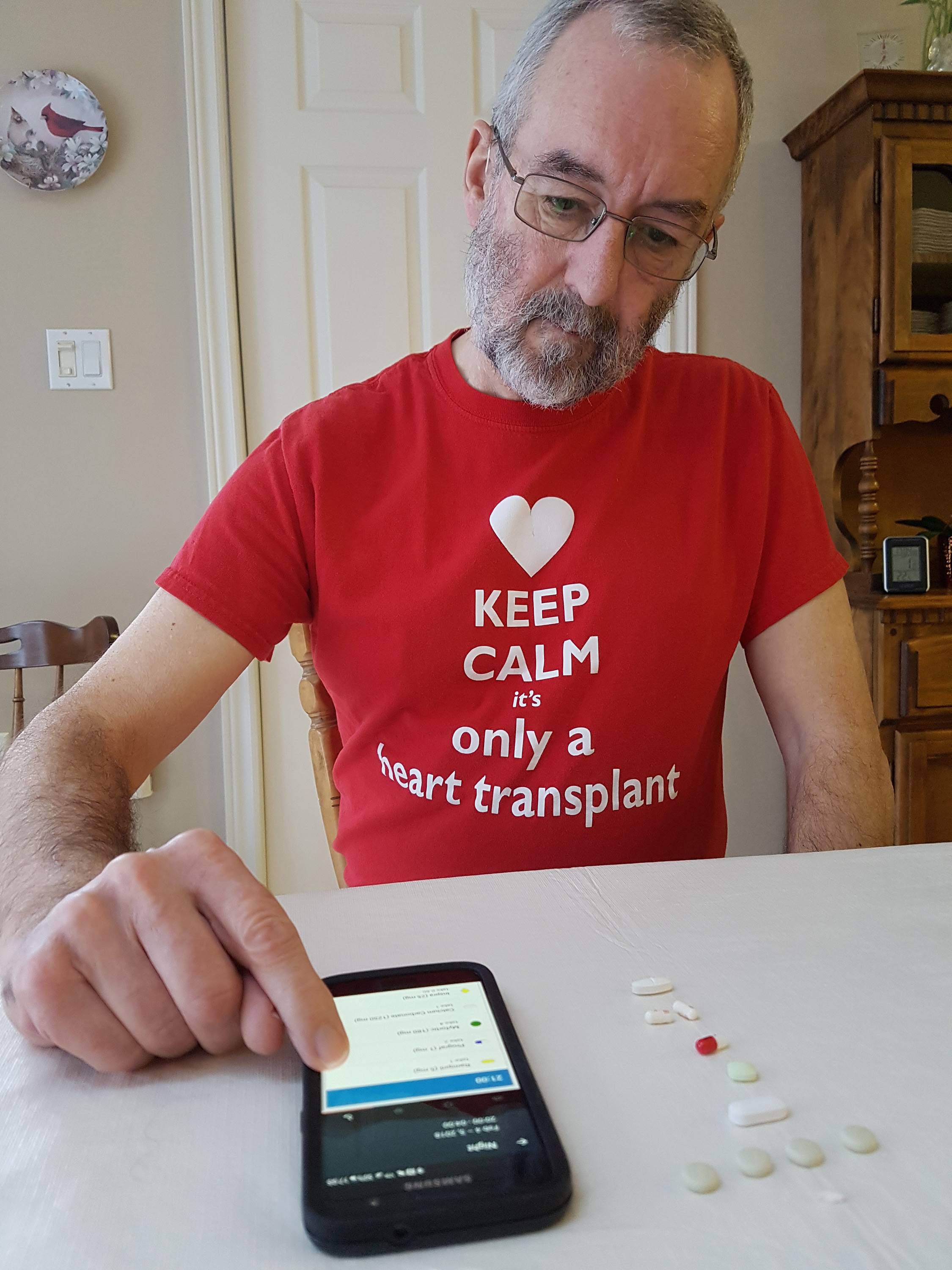 The ability to designate a loved one as a second set of eyes and ears can be comforting rather than intrusive, believes Willis. — Tribune News Service

For Mike Willis, 63, of Guelph, Ontario, getting regular medication prompts means the difference between staying healthy and ending up in the hospital – again. Willis takes 27 pills a day, most of them anti-rejection drugs to ensure that his body doesn't reject the heart transplant he received two and a half years ago after contracting viral myocarditis.

To keep it all straight, he uses Medisafe, an app that reminds him when it's time to take his next dose, whether to take the pills with water or food, and what side effects might be attributable to the medication.

"After my transplant, I was a little confused, so I designated my wife, Linda, as a "MedFriend" which meant she got an alert when I didn't take my medication," he said.

Indeed, the ability to designate a loved one as a second set of eyes and ears can be comforting rather than intrusive, as Willis and Delano have discovered. And yet, there's a fine line between technology that allows older adults to live independently, and technology that reinforces stereotypical images of aging as a slow decline toward death.

Until recently, Personal Emergency Response Systems (PERS) – made famous by the "Help, I've fallen and I can't get up" TV ads – was the only reliable technology to help older adults who had fallen, says David Lindeman, director of the Center for Technology and Aging at the University of California-Berkeley.

By the end of March, MedHab, a Texas company best known for its wearable insoles for rehab patients, will begin shipping MyNotifi, a medical alert wristband designed to detect falls and send an alert to a family member or friend.

"It looks like a watch, and Mum or Dad can invite anybody they want, family or friends, to get those alerts through the MyNotifi Fall Detection app," said MedHab President and CEO Johnny Ross.

"If the goal is independent and connected living, we need solutions that are multifaceted and that connect people with their family, their doctors, their neighbors," said Jody Holtzman, senior managing partner of Longevity Venture Advisors.

"If the technology is framed in the context of fun and convenience, like Alexa, then people will start to buy these things."

Carol Smith can't imagine life without Alexa. "When I read, I just say, 'Alexa, what does this word mean?' Or I ask Alexa to play the song. Oh, and I'm a basketball fan, but if I can't stay up late to watch the end of the game, I'll ask Alexa what the score is the next morning. There are so many things you can ask her. She's fun. And she's always pleasant. — Kaiser Health News/Tribune News Service