The naked truth about sending nudes

Studies peg the number of teens who sext at about one in four. (Fotolia)

All it takes is one screenshot. Someone's life can be totally destroyed in the blink of an eye.

Teens have been sending explicit pictures – sometimes called nudes – to one another practically since cellphones were invented. However, the dawn of Snapchat has made sending nudes a lot more dangerous.

"Snapchat allows teens to communicate in the present and quickly with their friends and whoever else they may be talking with," Lisle, Illinois, police officer Sean McKay said.

"Many of these apps can be useful, and you can have fun with them, but you need to be careful with what you post."

McKay works closely with schools in the Lisle area and often deals with crimes involving minors. He knows firsthand how extreme the results of sending nudes can be.

"Simply being in possession of the images is a serious crime that could result in having to register as a child sex offender," McKay said. "Most cases we can resolve in other manners, but it is a very serious crime, especially in cases where someone uses the materials as threats to get what they want."

Most of the time, teens know and understand the severity of such punishments, yet they continue to send pictures.

"You send nudes because they make you feel good about yourself," Plainfield North senior Ashley Kennick said. "You can only send them to people you trust because they might save (your nudes)."

A snap might disappear after 10 seconds, but apps like SnapSave and Vault allow Snapchat users to save and store snaps without the sender's knowledge.

"Students need to educate themselves on how to make the best choices online," said Ross Draper, dean of students at Plainfield North. "Once you tweet, snap, Facebook or Instagram something, it's out there forever."

With more teens sharing nudes than ever before, the law has redefined what "sexting" is.

"Sexting used to be defined as one person sending explicit pictures to another person. This was illegal when either of these people (were) underage," Draper said. "However, law enforcement wasn't able to keep up with the amount of cases being brought to them, so they had to change the definition."

Now, sexting is when someone distributes another person's explicit pictures. Social media, of course, is the main vessel through which teens distribute nudes.

While some teens, like Kennick, view sending nudes in a more positive light, others are not too fond of the idea.

"I do know of people who use Snapchat as an outlet to distribute pornographic images," St. Ignatius junior Jeremy Atuobi said. "Because most people use their full names on Snapchat, the pictures could be saved and reappear maybe not now, but in the future."

Some focus more on the sexist stigma that surrounds the phenomenon. St. Ignatius senior Stephanie Tinsley said she feels that girls take the brunt of backlash from Snapchat nudes.

"The only problem I have with this topic is that girls are shamed and are being notoriously known by other people just for sending a nude, but when guys do it, their reputation isn't hurt at all," Tinsley said. "The problem isn't girls taking the photos, the problem is that guys are sharing them."

With the majority of "takers and senders" being girls and the "receivers and sharers" being guys, there seems to be a million dollar question: Is it the girl's fault for taking and sending the photo or is it the guy's fault for sharing it?

Atuobi said he maintains that girls should know better than to send the images in the first place.

"Sharing nudes shows a lack of common sense because not only is trust fragile with the receiver, but Snapchat saves all snaps," he said.

On the other hand, St. Ignatius senior Michael Levesque said he thinks the fault lies mostly with males who choose to distribute the photos.

"While it shouldn't be happening at all, I think that it is the guy's fault for sharing the nudes because they most likely asked for it and provoked the girl to send one," Levesque said. — Chicago Tribune/Tribune News Service 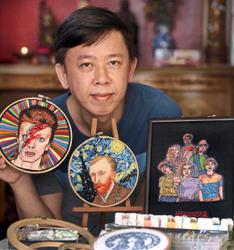 Hikers to be reported for taking nude pictures