Fallout Shelter could well be the most fun you’ll have waiting for a highly-anticipated game – Fallout 4, which is finally happening!

But first, to put Fallout fanatics in the mood for that big release, Bethesda sprang this little surprise on us a couple of weeks ago: Fallout Shelter, a community management simulator where you take the role of a Vault Overseer.

In Fallout lore, Vaults are underground shelters built in anticipation of the nuclear war that left the world a ruined wasteland. And Overseers are the dudes in charge, so YOU are the boss!

The world of Fallout is an odd one where US society somehow became locked in a 1950s “template” right up to the end of the world in 2077. The Vaults were created some two decades earlier; in the Fallout games, we learn they were actually laboratories for a variety of extreme social experiments.

This mobile game looks and sounds a lot more cheerful than your typical Fallout game. And why not? It’s the start of your grand venture. And better still, not one of your Vault Dwellers suspects that (evil laugh) they’re all lab rats in your world!

Er, right then. On with the tour. FALLOUT TIME: Bruce was always one to understate things.


The Vault in our stars

You begin with the bare essentials of a Vault. You need to recruit (and later, breed) Dwellers to manage the three key resources: power, water and food. Each resource is produced in a particular room – power plant, water treatment plant and diner, respectively.

As you generate more resources and your Dwellers level up, you also earn bottle caps, which is legal tender in the Fallout world.

As Overseer, you are responsible for expanding your Vault by building more resource centres, living quarters and specialised rooms, and upgrading them. Resource shortages mean disaster – rooms shut down, while Dwellers starve or get radiation sickness.

You also get to pick which Dwellers to send out into the Wasteland to gain valuable experience and find cool stuff. Watch out that they don’t get killed out there, although you can revive fallen explorers if you have the caps to spare.

Most of the stuff brought back so far has been junk, though the other Dwellers always seem happy to accept whatever I give them. Or maybe they’re just all drawn happy, in that cutesy Pip-Boy style.

The really cool loot comes from the game’s only in-app purchase: lunchboxes. You can buy these for real money, or try to earn them by completing certain objectives. Usually, the completion reward is more caps, but now and then you get a lunchbox quest that can be really worthwhile.

Each lunchbox contains four rewards with varying degrees of rarity. These can be extra resources, armour, really kick-butt weapons (I’ve received a Magnetron 4000 and hardened minigun), or even unique individuals with high stats. 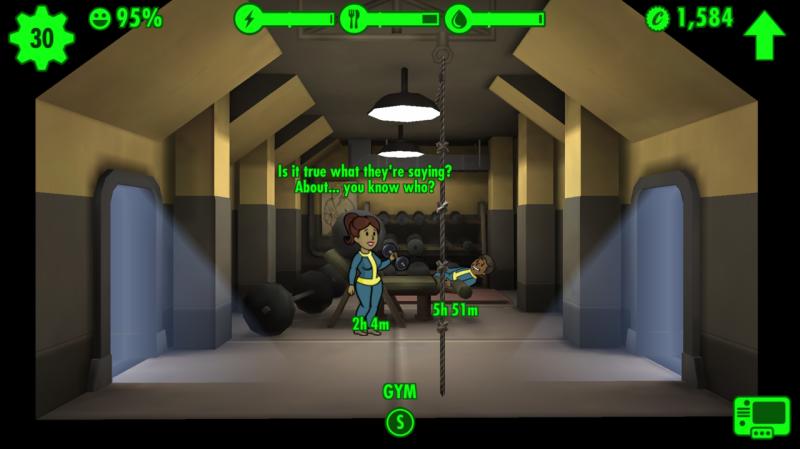 RUMOUR OR TRUTH?:News of Voldemort's return had even reached the depths of Vault 195.


I thought you were Special

Unique individuals? Aren’t Dwellers just ... Dwellers? Not so fast. As with regular Fallout characters, the Dwellers in Fallout Shelter are also governed by the Special rules. It’s an acronym for Strength, Perception, Endurance, Charisma, Intelligence, Agility and Luck.

And as you’ll soon find (tapping on any Dweller brings up their profile and mini-inventory of outfit and weapon), each one of your people has different scores in each Special trait. It’s up to you to assign the right Dweller to the right task for their outstanding stats.

As you progress by hitting certain population milestones, you will be able to build training rooms that increase your Dwellers’ Special stats, like gyms, classrooms and armouries.

Certain types of clothing also have a booster effect on Specials, just like in a regular Fallout game, although the visual effect can be somewhat difficult to take. WARNING: Keep dreaming, kid. The robots in the Fallout universe might as well be Terminators, for all the love they're going to show you.


The Dwellers in the dark

Since it gets pretty monotonous in the cramped confines of a Vault, your Dwellers are all too happy to take on one other task required of them: making little Dwellers who will – in some bizarre acceleration of in-game time – quickly grow into big, productive ones.

Just put one male Dweller and one (unrelated) female Dweller together in the living quarters. If the chemistry is right, and I’ve yet to see otherwise, they will engage in some totally cheesy (I’m talking Blue Stilton-level stinky) flirty banter before running off from prying eyes to do your breeding. Er, bidding.

Putting family members together in the same room gets a response like “It’s so nice to just hang out here with family”, and nothing else. Hey! These are Dwellers, not Lannisters. FOOD FOR FIGHT: Amazing how they manage to pack so much killing power in a lunchbox. Must be all the preservatives.

Fallout Shelter has been a huge hit in its first two weeks, even dislodging Candy Crush Saga from its #3 revenue-earner spot for a while.

In the five days I’ve had it, my days were measured by frequent check-ins to harvest resources, maintain internal harmony (heh) and perform other Overseer tasks. It’s been addictive, and I am glad that the developers didn’t put huge waiting times or pay-up-or-else barriers in the way of enjoyment.

But one big issue with it is that the game is already becoming a humdrum routine of collecting resources, upgrading rooms and Dwellers, and fighting off Raiders (who don’t even have the decency to leave any loot behind when they’re killed).

Lacking a competitive element or any overt game-changing objective, Fallout Shelter will soon go the way of most mobile games ... barring a major update. But worry not! There are already loads of suggestions out there for some pretty deranged things you can do to live up to the Vaults’ original purpose as “social experiments” (check out kotaku.com for a few).

Makes you yearn for a few canisters of Forced Evolutionary Virus lying around somewhere ... 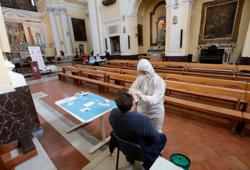