One of the first things you’ll notice about Siem Reap in Cambodia, even before the majesty that is the Unesco world heritage site that is Angkor Wat, is that it’s bloody hot.

Temperatures hover around 35°C to 36°C but the humidity feels much higher than in this country, resulting in this reporter ­looking like he just came out of a wet T-shirt contest for unattractive ­people.

The humidity and heat doesn’t just affect the visiting foreign ­journalists, but also the various locals who are there to showcase the camera rigs that are being used to capture Street Views of the ­temples in the Angkor area. The Street View images of Angkor’s many temples allow the user to “walk” down paths and into the temples themselves to get a 360° virtual tour of the area.

It was captured using a variety of devices, including the Google Street View vehicles with ­cameras ­mounted on the top for areas with roads as well as a backpack-­mounted camera called a Trekker for areas inaccessible to vehicles.

The 18kg Trekker backpacks are carried by locals who are tasked with walking down the paths and the inner temple courtyards of the Angkor area. MASSIVE UNDERTAKING: A Cambodian technician carrying a backpack mounted with a device housing 15 cameras as he demonstrates the technique used to digitally map the Angkor Wat temple, part of the Angkor architectural complex in north-western Cambodia. Angkor Wat has been digitally mapped for the first time, allowing people to visit the famed temples from the comfort of their armchair using Google Street View. — AFP

One can only ­imagine what an undertaking this is, as there are 90,000 Street View images ­covering over 100 temples in the Angkor area over some 400 sqkm (which is a little over half the size of Singapore).

According to Manik Gupta, group product manager for Google Maps, the backpacks last for six to eight hours and takes images every 2.5 seconds.

“Even after the images are captured, there is still work to be done to stitch them into a seamless whole, including compensating for a human’s natural swinging motion as they walk,” said Manik. Many of these images allow the user to zoom in to take a closer look at wall carvings and other interesting details of the temples.

The images are part of a ­longterm Google project to not just capture Street Views of ­cities, but also popular tourist spots and Unesco world heritage sites around the world, giving users a taste of the art and culture of different countries for those that can’t afford to or don’t have the opportunity to visit those places themselves, said Manik.

The project started in July 2013 with the cooperation of the government of Cambodia and the Authority for the Protection and Management of Angkor and the Region of Siem Reap, the body that is responsible for the ­management and ­protection of the Angkor’s temples and ­heritage sites.

However, Street View itself is only part of a larger project for the company, which also established the Google Cultural Institute, a virtual site that uses the same idea as Street View, but applying it to virtual tours of museums and artwork.

Amit Sood, director of the Google Cultural Institute, is extremely enthusiastic about the project.

“The cool thing about this is that it gives you access to places you normally wouldn’t be able to access if you were a regular ­visitor, such as the costume room of the Paris opera house,” he said. 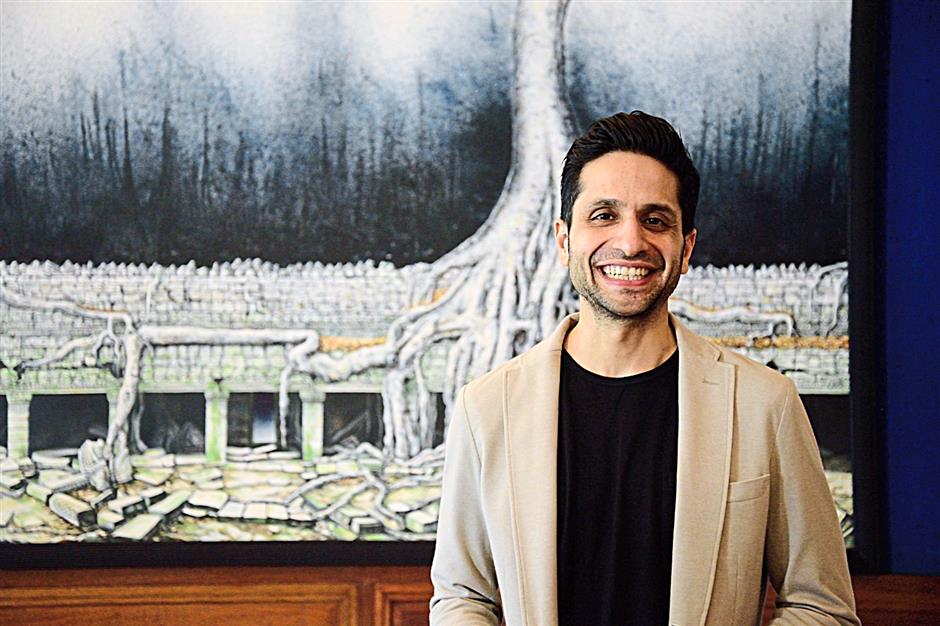 ENTHUSED: Amit Sood talking about how Google Street View technology is being adapted for virtual museum tours around the world.

Amit went on to say that the virtual tours allow you to zoom in to pieces of artwork and get really close.

“When I mean close, I mean right down to the brushstroke level — if you visited the Mona Lisa in the Louvre, for example, you have to see it from behind a barrier which is pretty far away,” he said.

Using Gigapixel technology, anyone with a web browser can instead zoom right in to the ­painting or artwork and appreciate the detail on a more micro level.

These images are captured in various resolutions, and can be as large as 10 billion Gigapixels, using giant camera rigs that are installed during when the ­museum is closed and takes six to 12 hours to capture.

“We usually do it at night also because there are less vibrations that could affect the quality of the final image,” said Amit.

He went on to ­demonstrate how zooming into to the Gigapixel image of Pieter Bruegel the Elder’s painting, The Harvesters, gives the viewer a whole new perspective on the artwork.

GET CLOSE: The Harvesters by Pieter Bruegel the Elder reveals more interesting detail as you zoom in.

“If you zoom in to the top ­middle section of the painting, you’ll notice a small group of people playing some kind of game,” he said.

“It turns out that they’re ­playing a traditional game where children beat an animal with a stick. Without zooming you wouldn’t be able to see this at all as it’s such a small part of the painting.”

Amit said that unlike Europe, which has a wealth of ­paintings, in Asia art is expressed in the form of textiles and carvings and using Gigapixel technology, users will be able to zoom into the fibres of textiles or right up to tiny cracks and imperfections in carvings.

The Cultural Institute project started in 2011 with the ­intention to capture virtual tours of museums and other non-profit institutions. Today, the initial 17 museums have grown to a ­whopping 459 in over 150 countries and it’s still growing.

Apart from offering ­virtual tours to visitors, the project also allows curators of these ­museums to also create tours of their own with video and custom layouts to supplement the high-resolution images.

Despite the availability of these resources online, both Manik and Amit point out that these are meant as a supplement to the experience of going there yourself or as a tool to more effectively plan your trip.

“For example, with Angkor, we have Street Views of over 100 sites. If you visited Angkor yourself, you wouldn’t be able to fit all 100 sites into your tour. This way you can look at those other sites and perhaps whet your appetite to come back for more,” he said.