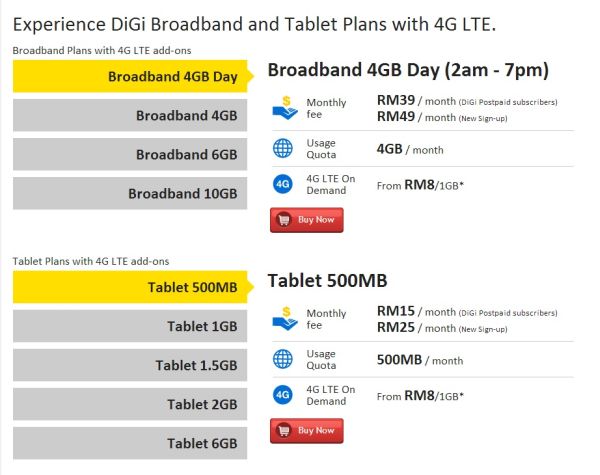 Ready for 4G: DiGi's website has posted up its 4G LTE plans for broadband and tablet users.Type in your

INTERNET consumption has grown tremendously in the mobile device space lately, with many consumers now becoming more specific in terms of their online preferences.

According to Praveen Rajan, head of Internet and services for product marketing at DiGi Telecommunications Sdn Bhd, customers no longer ask for Internet connectivity in general, but rather, tend to name specific apps when seeking out mobile data plans.

“They tend to name the apps first, and then we help them by advising them on which plans are most suitable for using those apps,” he explains.

To date, Praveen says only 30% of DiGi’s 10.5mil customer base are on smartphones. Around 70% to 80% of them remain prepaid users.

“Our focus is still on helping these people to get the right first device,” he says.

Praveen also shares that DiGi’s customers can look forward to a better 3G experience soon. “We expect our current 3G population coverage to reach 75% by the end of the year,” he says.

Meanwhile, the company’s efforts to establish its LTE networks across the nation are still ongoing.
“We’ve only started a pilot phase in selected areas in Klang Valley so far,” Praveen says.

However, he reveals that DiGi targets to have close to 1,500 sites up and running by the end of 2014, and it hopes to achieve around 50% population coverage for LTE nationwide by the end of 2017.

“The aim is to bring LTE to as many key areas nationwide and to provide a good enough experience in those areas,” Praveen says.

He also adds that DiGi will not be offering customers specific LTE plans, but instead, would include it into its existing broadband plans.

“We’ve made it LTE ready. So if you take any of our plans, you can get LTE provided your device supports it,” Praveen says, while adding that customers will need change to a new SIM card in order to enjoy LTE services.

Currently, DiGi has bundled three LTE-enabled smartphones with its mobile data packages: The Nokia Lumia 920, the Blackberry Z10 and the HTC One.

“It’s about the speed at which you can transfer data. We’ll be able to support more customers in a particular area and they’ll be able to do a lot more things online at the same time,” he says.

For example, Praveen says that video streaming will be up to 10 times faster than it is currently, while accessing files through cloud services like Dropbox will be 20 times faster.

Although it is expected that the number of LTE phones in the market will continue to grow, he expresses his disapproval over current decisions by certain manufacturers to sell LTE phones at a more expensive price compared to its other products.

“We don’t think that would be beneficial for customers. But we expect to see a shift in that trend eventually.

Over the next six to twelve months, you will see more manufacturers offering devices with LTE capabilities in it by default,” he says.

In tandem with the upcoming improvements in network quality, DiGi has also initiated more collaborations with video content providers such as Tonton and Maaduu. Its latest partnership with global TV site, Viki, commences in September. Viki offers streamed video content with translations in more than 160 languages.

“We feel that there’s a lot of pent-up demand for video content that’s legal,” says Praveen. “That’s where we expect to see a rise in data consumption.”

As for the future of messaging apps, he feels that the market will continue to be fragmented.
“We’ll continue to have lots of players, and consumers will each have their own favourite app and will try to bring a following with them onto that app,” he says.

Another current trend which Praveen sees great potential in is location based services.
“I think it opens up a whole new world for app developers. There’s going to be so much more we can do.

However, from an operator’s perspective, we are now contemplating how we can help our customers understand this technology a little better,” he says.

Praveen says DiGi plans to take more proactive steps to educate its customers further on the dangers of revealing their location via their mobile device.

“The least we can do is to educate customers on the good and bad effects of it. It’s not something we can control anymore. It’s all down to the apps and the device,” he says.