Its been twenty years since I first got pulled into trading card games – time does fly when you’re having fun. Like many thirty-somethings, Magic: The Gathering was my first “poison”, followed by a little-known "customisable card game" Star Wars (by Decipher Inc).

A dozen or so card games later (mostly of the trading or collectible kind), I decided to pull the stops on what has been my longest interest thus far. I quit Magic for good in 2011, having decided that to even keep up with the game on a strictly casual basis (read: once a week meetups with friends, two to three hours tops on Sundays), had become nearly impossible.

(Oh, that and I distinctly remember me obsessing over Fantasy Flight Games’ Blood Bowl: Team Manager Card Game boardgame then. Touchdowns, Skaven, Orcs and Elves, oh my what a game!)

And by 2013 (if memory serves me right), I’d started to get into FFG’s Living Card Games (LCGs). Like Trading Card Games, but lighter, and much more cost-effective.

The term LCG is actually trademarked by FFG, and is essentially a "no-blind-buy" card game product that is made for folks with less time and average wallets. So instead of 15-card booster packs that costs as much as a working class meal (around RM11/12) and have a random card mix, LCGs are produced using a fixed distribution model.

That means that if I’m getting into Android Netrunner, all I’ll need to start is a single Core
Set, which has a fixed bunch of 200+ cards, a rulebook and assorted game tokens. Instead of expansion sets, there are Data/Force/Chapter/War Packs that have fixed assortments of cards, in complete playsets.

In short, all you’ll need to start your LCG of choice, is roughly three RM50 notes: prepare extra money if you insist on sleeving your cards (like I do). But hey, at around RM150 for a single Core set is pretty much all I’ll ever recommend, if you tend to learn a game, and play maybe two to three times a month (you’ll get to swap cards around to build different decks).

You’re probably wondering by now: which LCG should I get into? This is where I come in, and try to help you select your LCG of choice. 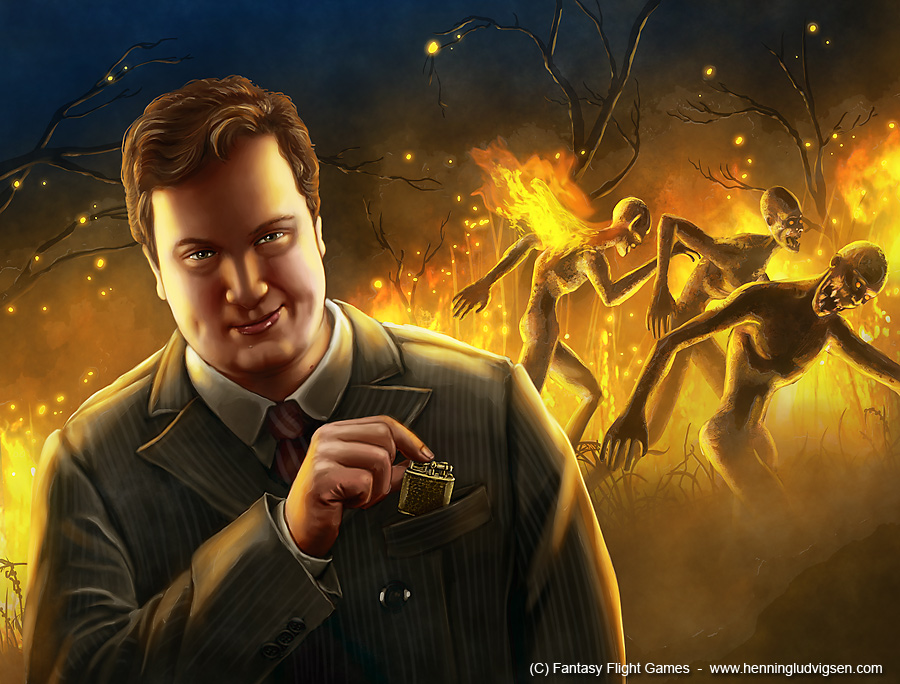 TALK TO ME: The professional counselor in Call of Cthulhu.
Theme matters

The first criteria that many I know use, in selecting a game, is actually its theme, or universe, or franchise. Every game will be based on something, and as far as LCGs go, there’s a bunch of big name franchises that will definitely be familiar to science fiction or fantasy fans.

FFG’s first LCG was actually Call of Cthulhu (CoC). Now, it just so happens that CoC did not start out as an LCG, but was initially a TCG. Yes, FFG’s reboot of the Lovecraft card game is pretty much a masterstroke in hindsight.

There is also A Game of Thrones (AGoT) LCG. Based on the bunch of books (instead of the more recent TV series), this game will thrill you if you’re into the rich bunch of lore surrounding the mythical kingdom of Westeros.

If you like a more “classic” take on fantasy, why not try Warhammer Fantasy LCG?

Command Bretonnian, Dwarven, Orc or Elven armies as you engage in brutal warfare set in the Old World.

Wait, there’s more fantasy! Lord of the Rings is arguably the most iconic universe (well, if anyone tries to convince you otherwise, then I really have nothing to say), and has its own story-rich LCG as well.

Looking for something more science fiction-based? How about playing hackers and corporations in a dystopian future: if that floats your boat, then Android: Netrunner might be your thing.

Star Wars fans will relish the chance to play their favourite characters in the Star Wars LCG.

From Han Solo, to Boba Fett and even Darth Vader, you also get to pilot might Star Destroyers, X-Wings and AT-ATs in this card game that’s all about the Force.

And finally, Warhammer 40K also has its own LCG. Play a warlord of your chosen race, and conquer planets using mighty armies consisting of fine soldiers and death-dealing machinery of war!

NEED MORE INPUT: The seekers of knowledge from Cthulhu.

I only tried the CoC LCG recently, having overcame my bias against a game that is set in a universe that’s rather alien and unfamiliar to me. I’ve come to realise that the Cthulhu mythos does have its followers, and it was almost by sheer coincidence that I finally had a taste of the intriguing card game.

Players attempt to win "stories", with three stories being everyone’s target to achieve. Each story needs five success tokens to win. The cards in your hand become resources.

The characters of the game are often the stars of the game: you can win struggles, get assigned to stories and earn you success tokens. There are also "event" and "support" cards which depict the game’s wild card elements, with the former having one-shot effects, while the latter giving ongoing game abilities.

There are added things like “conspiracy” cards, but that’s pretty much it for CoC LCG in a nutshell. Trying this game feels easier than some of the other LCGs I’ve played (guess which!), though don’t underestimate the game’s depth. Seven years worth of expansions have given this one quite a lot of variety when it comes to deckbuilding and a pretty hefty card pool.

Games seem to go at a rapid clip, as players build their “board” rapidly, with “rush” style of plays very possible. I like the fast pace of the game, as well as the feeling that you’re never quite sure who’s going to win, until the very end or final turn of the game. (Then again, credit to my friend John Choong for building the most balanced “beginner/intermediate level” CoC LCG decks!).

While the gameplay is speedy and exciting, the age of the game means that the older expansions can be a chore to look for. You can score sets of online shopping sites, though I’ve seen CoC LCG sets go on social media groups.

I’m a bit more open to the bizarre universe of Cthulhu now, thanks to this LCG. Weird squid men aside, I think the setting is actually pretty cool now! Maybe it’s because of the more human characters and all…

In a nutshell, if you’re into the Cthulhu mythos or a game that has a really unique setting, give this card game a whirl or two. The “base sets” for this game may be a little tougher to track down, but I found the gameplay rewarding enough to want to invest in. My definition of rewarding happens to be speedy gameplay (experienced players should finish games under 30 minutes), and unique enough faction “flavours”, which make deckbuilding rather fun.