Westerado: Have gun, will travel

Saddle up pardner, ‘cause we’ve got some cowboyin’ to do out here in Westerado: Double Barreled. Yeehaw! But seriously: This is an awesome 2D action RPG set in a Western.

Pardner, if you ever wanted to explore the Old West and have gunfights with desperate outlaws, then boy howdy do we have a game for you. OLD WEST: Westerado makes you feel like you're in an ol' Western film – buffalos, saloons and sunsets, the game world has it all.

Westerado: Double Barreled is essentially a Western film in the form of a 2D open-world action RPG, and it stars a gunslinger who’s after the murderer who killed his family and burned down his ranch.

If you’ve watched any cowboy movies (of the Clint Eastwood variety, not Brokeback Mountain) then you know exactly how this will play out – so saddle up, ‘cos we’re riding off on an adventure!

The real draw of Westerado is that it lets you explore a really lived-in world that captures the spirit of the Old West. The pixelated artwork is gorgeous and the animations (such as townsfolk chatting or vultures pecking on corpses) makes the world feel alive, but the music – with the harmonica, guitar and banjo playing in the background – is what really sells the setting.

Just like the Old West, you’re given a lot of freedom in where you go and what you do – you can be a white hat who helps the sheriff with bounties to unlock clues to find the ­murderer, or you can play a black hat who draws a gun on bankers to stage heists. 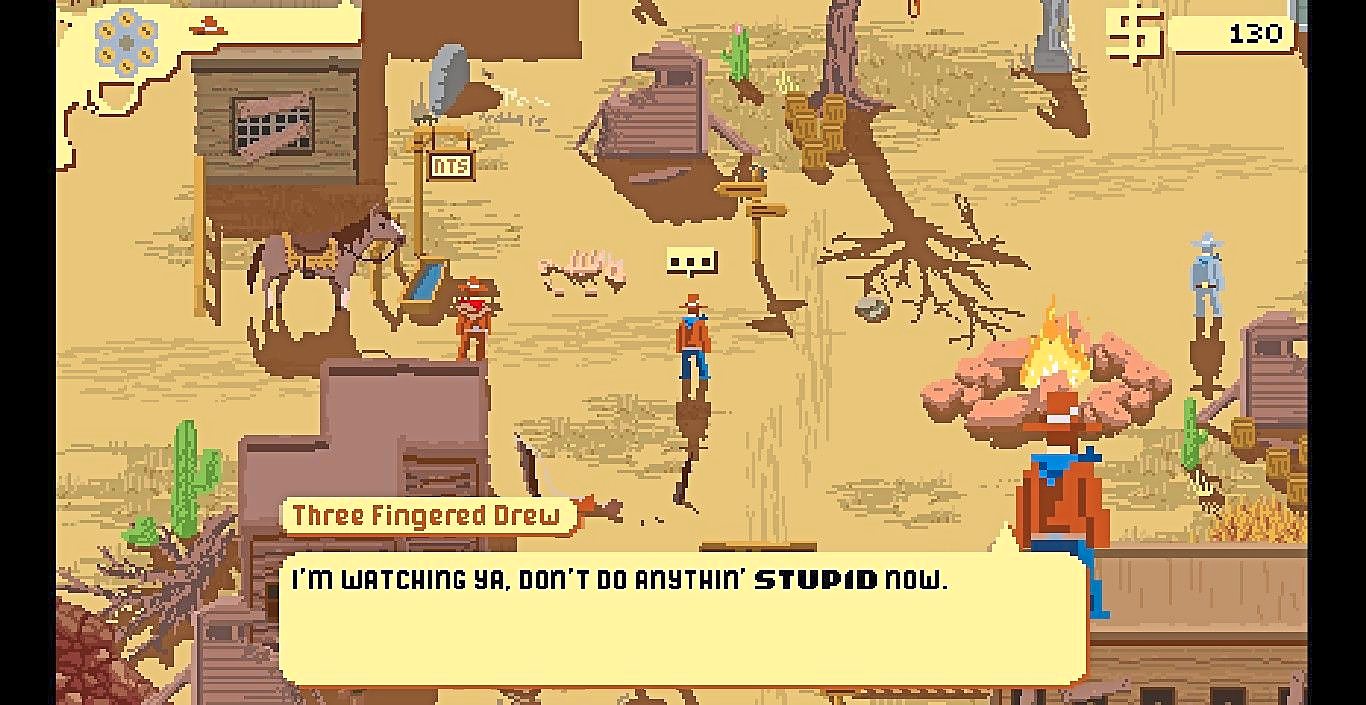 FRIEND OR FOE?: Unlike most games, NPCs don’t attack you immediately on sight, so you need to quickly figure out if they’re bandits one second away from firing at you or a wary quest giver.

As with most open-world games, it’s never really spelled out what you actually should or shouldn’t do, so often you’ll come across ­people and you’re never sure if they’re a ­bandit about to rob you or an important quest giver... until somebody pulls out a gun.

What we’re saying is that the dangers feel pretty authentic, like that time we had a tense standoff in the desert where Wild-Eyed Bill would say to his gang, “Well lookee what the cat dragged in,” and we’d growl, “Stranger, ah don’t want no trouble.”

A gunfight inevitably ensued, because that is what we get and deserve for using double negatives.

I do want trouble

Dialogue and gunfights are the main forms of interaction in Westerado, so when you do meet those outlaws who are terrible conversationalists, you’ll need to master the game’s unique combat system.

It’s fairly involved – first you need to press a button to draw your gun, then another to cock the pistol and shoot it, and reloads are done one bullet at a time. Oh, and you can only shoot horizontally. 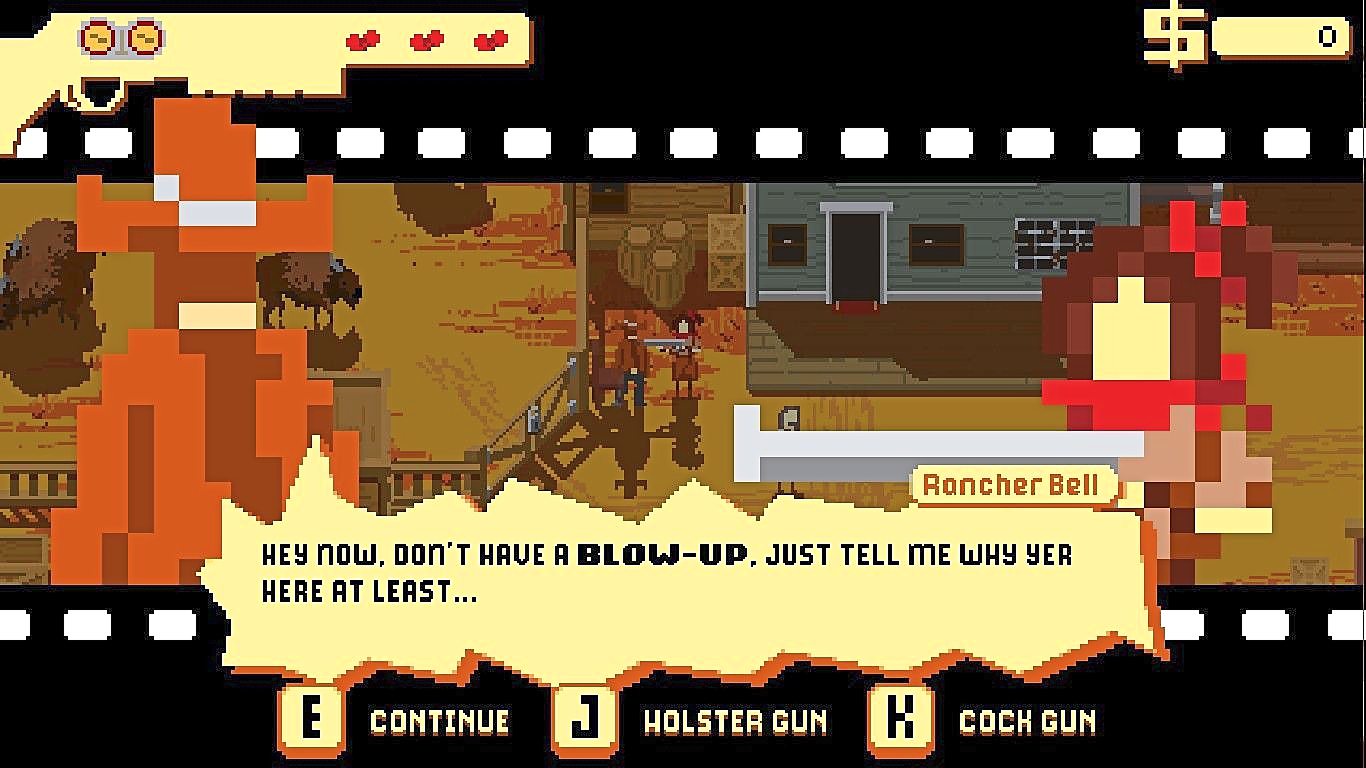 GUNVERSATIONAL SKILLS: Conversations takes a turn for the insane once you realise you can pull your gun out at any time and people will react to it.

Sure, the combat system takes a lot of skill to master and there’s a rhythm to the battle that precludes simply spamming the fire ­button – but that’s what makes it so fun! Battles in Westerado really feel like fast and intense cowboy duels where even small mistakes are deadly, and you really feel the tension as you can only take four hits before you run out of hats and die.

Ah, that’s right – in a nod to a cowboy film trope, hats are your “lives”, so they’re knocked off when the hero gets shot but is otherwise alive. Well played, game developers! (Check out TV Tropes for “hat damage”.)

There really is quite a lot of depth to this deceptively simple-looking game – the ­identity of the murderer is randomised on each playthrough, for example, so you can pick up half the clues and still go around the world accusing random people of being a murderer or outlaw. And sometimes you’d be right!

Plus, this is the only game we know where you can pull out a gun at any time during a conversation, allowing for some creatively hostile options for completing certain quests. 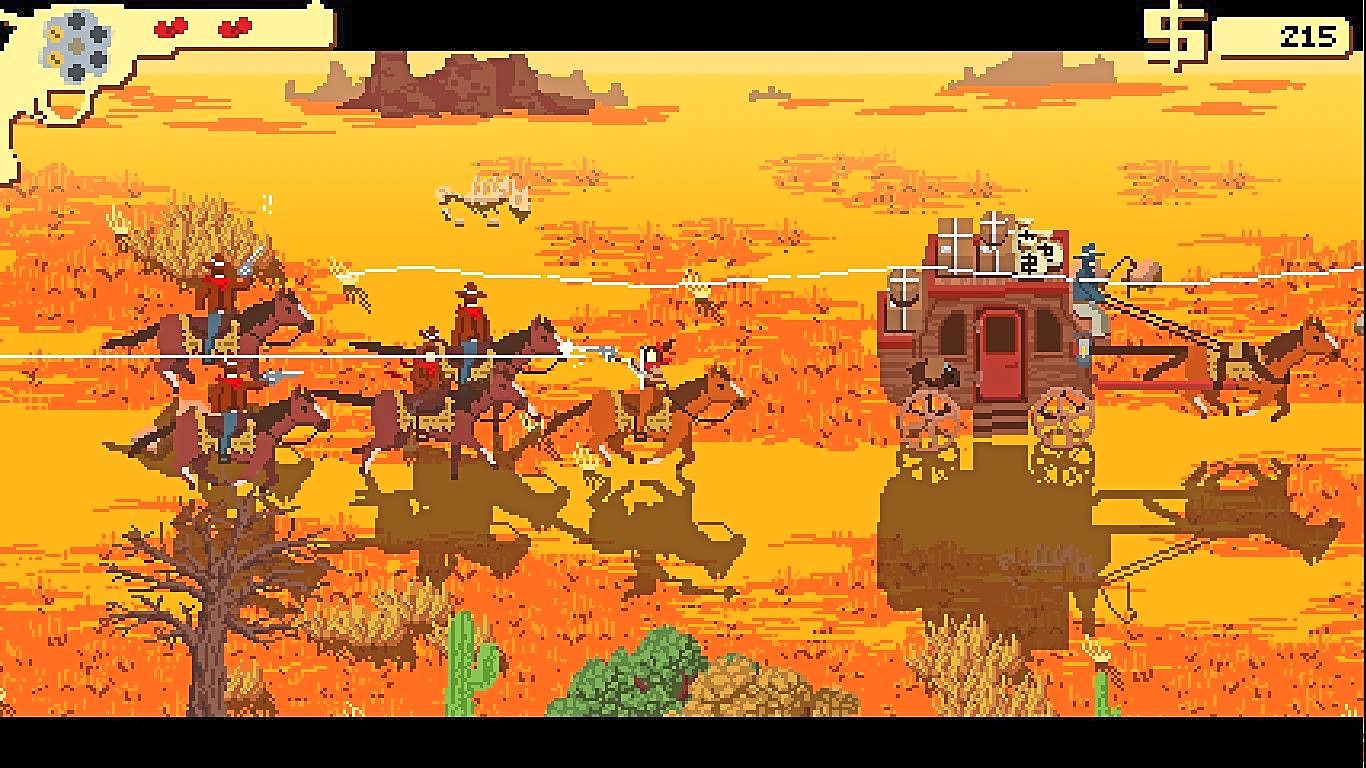 SADDLE UP: What, you thought showdowns at high noon were tough? Try having a shootout on horseback!

To see how much replay value Westerado had, we decided to start a new game as one of the unlockable characters we discovered.

This time, we picked “The Sister” (who came equipped with a double-barreled ­shotgun) and, in contrast to the “grizzled hero with a hidden heart of gold” we finished our first playthrough with, we played her like a raging sociopath.

We dubbed her Apocalypse Annie, because she’s like a crazier version of Calamity Jane, and she started and ended all her sentences with the click of a trigger.

Sure enough, the insane Sister ­completely screwed up the Old West and gave us a ­completely different experience – NPCs changed their dialogue and behaviour to reflect what we did, such as expressing ­surprise at how we prematurely completed a quest by discovering a ­secondary villain and executing him before we even found any clues. (He was in the house Apocalypse Annie was robbing.) 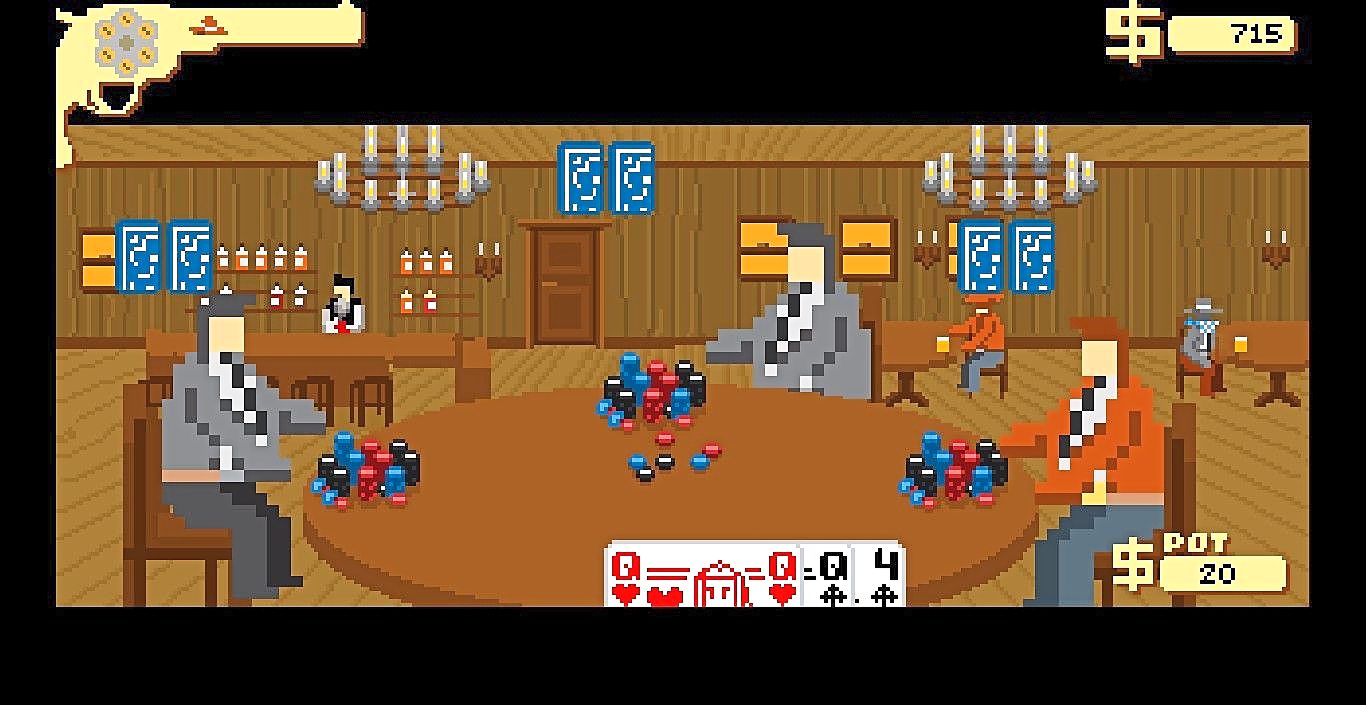 P-P-POKER FACE: It wouldn’t be the Old West without some card games. And the ensuing gun fights.

We know this is standard fare in big RPGs like Skyrim, but the scale of actions-and-­consequences in this small game really makes the world of Westerado feel alive... plus, it’s absolutely hilarious when you’ve killed so many people that bandits actually become terrified of you.

We give Westerado: Double Barreled a big ol’ recommendation. If you want a bit more ­convincing before you shell out for the Steam version, then try out the game’s original (Flash) version online at goo.gl/yXalmV.

If you’re still somehow not sold on how awesome it is to be able to run around the Old West like a cowboy and having the freedom to explore the world any way you like, then sorry pardner, but we just can’t let that insult pass.

Cons: Finishes in only two hours and we wish we could stay longer.