BIG SHIP: We find it hilarious that, even when we have a ship this huge, pirates still try to attack us in Pixel Piracy.

We don’t support the piracy of games, but we love piracy in games.

You know what we enjoy in games? Piracy.

Wait, no! Put down that torrent, we’re not condoning illegal downloads! We meant piracy in the manner of Captain Jack Sparrow, with all the high adventure, swashbuckling and irresponsible consumption of rum that entails.

Pixel Piracy is an Early Access game that sells itself as a “sandbox open world pirate simulator” with roguelike elements and pixely 2D graphics. Score! We love pirate adventures, we like sandbox games, and we enjoy roguelikes.

When we bought this game, we imagined ourselves sailing across an endless ocean, ­discovering exotic new islands and getting into epic sword fights. Does the actual game live up to this dream, though?

Before we answer that, let’s take a look at how this game works. 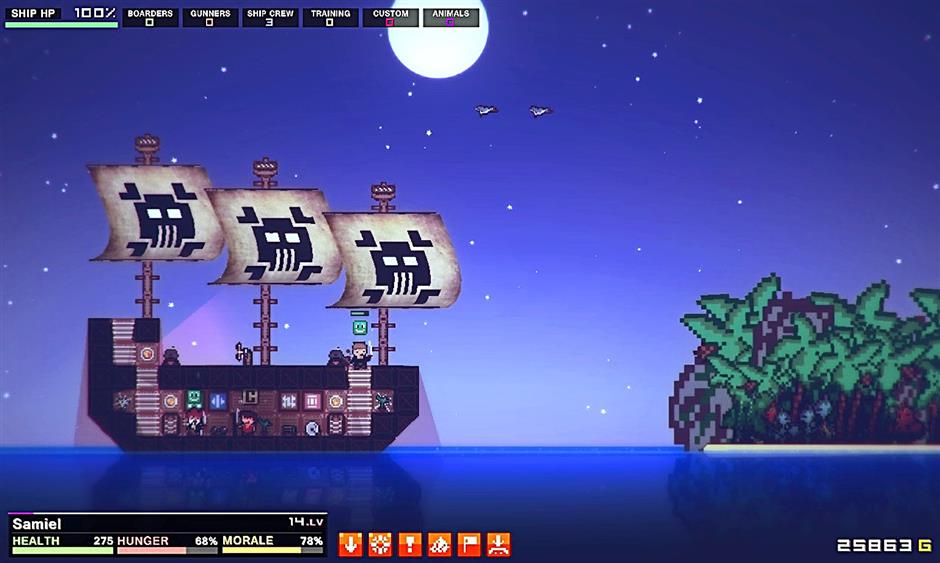 A PIRATE'S LIFE FOR ME: It's your job to recruit a pirate crew, build your ship from individual parts, stock up on supplies and head out for adventure.

You control a pirate captain on a randomly generated world full of islands and sea-bound encounters. It’s your job to recruit a pirate crew, build your ship from individual parts (like Lego!), stock up on supplies and head out for an adventure.

You can hop from island to island — or from sea battle to sea battle — from a ­simplified world map, but when you reach an island or encounter an enemy ship, the game becomes a side-scrolling romp with minor strategic elements. ISLAND TOWNS: Discovering a new town is nice, but they always seem way too similar to one another, with no surprises.

This is all very good stuff in theory, but there’s one big problem: we got bored within the first hour of gameplay.

Were we playing for the sense of adventure, exploration and discovery? Nope, because we soon realised that every island was basically the same as the rest, with few distinguishing features. Even the ship battles were similar to one another, devolving into straightforward fistfights rather quickly. An hour in and we’ve already seen everything the game could offer. 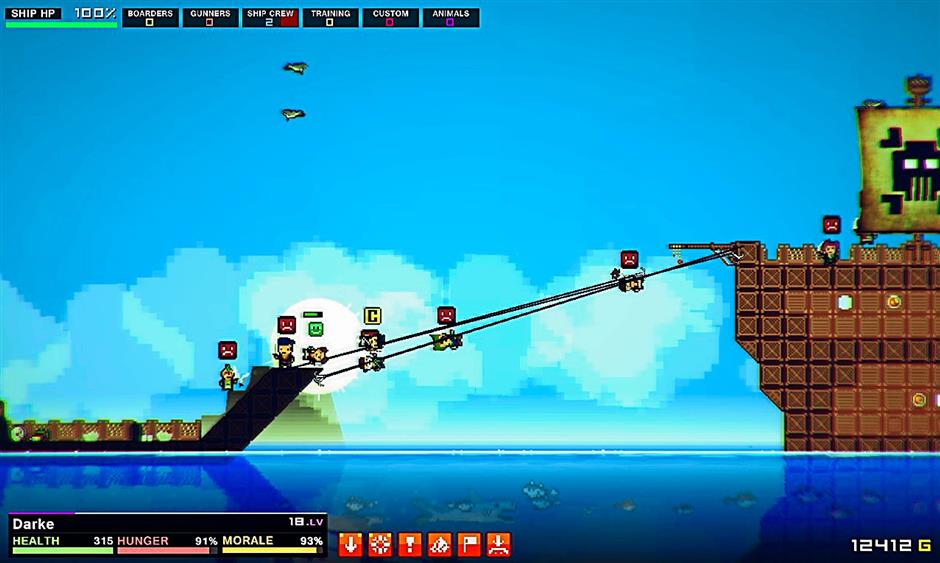 PIRATE FIGHT: Ship-to-ship fights mostly involve grappling onto the enemy's ship and getting into fisticuffs.

Were we playing for the creative freedom that a sandbox game entails? Nope, because the only thing we could customise was our ship, and that didn’t count for much. Most of the sea battles involved boarding parties, so your ship could be a tiny sampan, a massive man-of-war or a floating wooden robot and it’ll functionally be the same fistfight arena.

This essentially meant that Pixel Piracy gave us no good reason to continue playing, which is a terrible thing to say about a game. We pushed on for several more hours and tried starting the game in different difficulty settings, but we still couldn’t find the variety and excitement we expected from a journey across the high seas.

As mentioned, the game is still very early in development, so there’s still hope that the developers will take the game into more exciting waters. We admire their ambition, but, for now, we really can’t recommend that you sink yourself into Pixel Piracy. 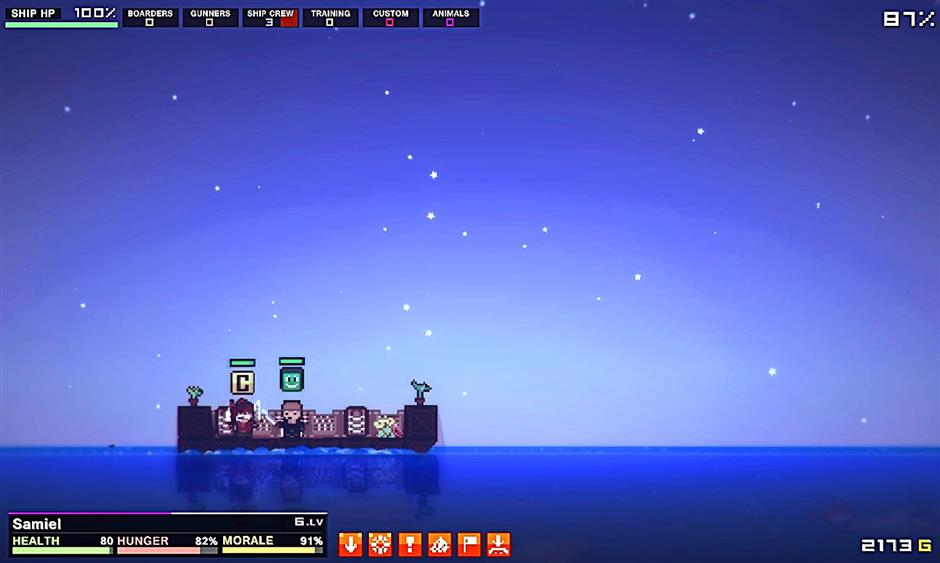 MY LITTLE SAMPAN: It looks small now, but add some wood and it'll get bigger... 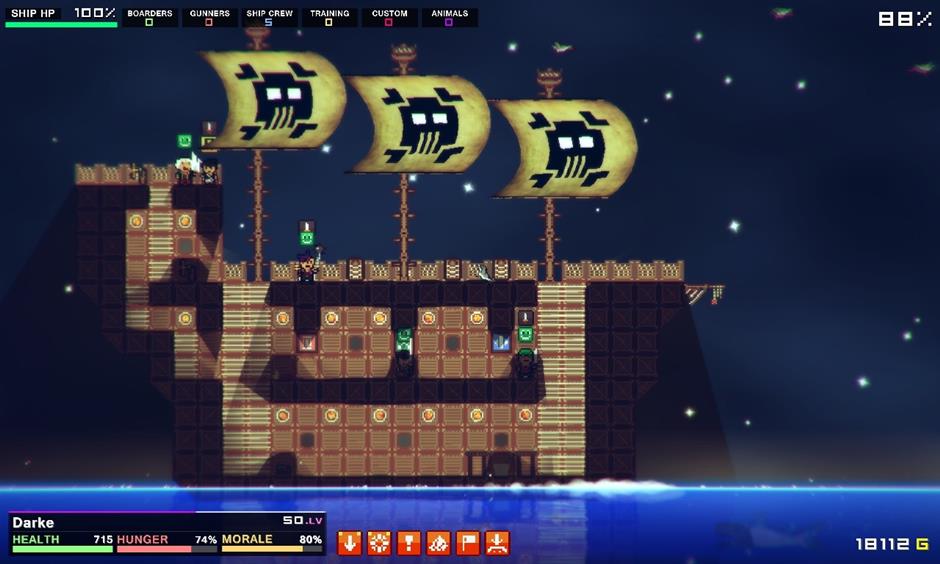 If there’s one good thing we can say about Pixel Piracy is that we really enjoyed the (admittedly pointless) boat-building element. It’s nice to know that you can build a huge frigate to compensate for the fact that you started off with a small pinnace.

Now let’s talk about a great pirate game, Sid Meier’s Pirates! It’s so exciting that it has an exclamation mark built right into its title, and for clarification, we’re talking about the 2004 release that’s available on Steam, not the original 1987 game or any of the bajillion different ports. 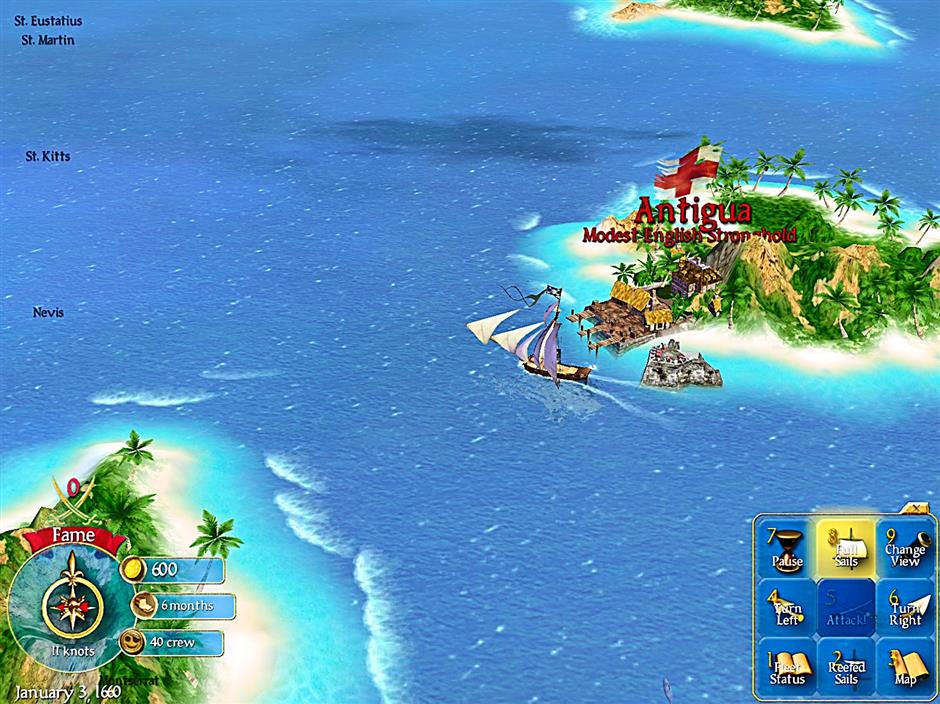 I SEA YOU: You'll spend most of your time sailing the vast blue seas... and trying to figure out how this 'wind' thing works with your 'sails' in Sid Meier's Pirates!.

Here’s how its story goes: one day, the evil Marquis Montalban wrongfully accuses your noble family of a crime and imprisons them, but you manage to escape. Now, 10 years later, you’re a dashing young adventurer driven to sail to the Americas, make your name as a privateer, rescue your family and get your revenge on the Marquis.

Does this sound like the synopsis of a Disney-directed pirate story? Definitely! At its heart, Pirates! is a take on pirate adventures as told by story books and movies — the ones that caught our imaginations as children. It’s not about gritty realism, but about capturing the spirit of high adventure.

And oh, do you go on adventures. As a privateer during the Golden Age of Piracy in the Caribbean, you’ll embark on a boatload of piracy, literally and figuratively. You’ll sail ships ranging from fast sloops to heavy ­galleons; engage in elaborate ship battles with cannons; and buckle some swashes in swordfights that are essentially reflex-based rock-paper-scissors duels. EXTRA CURRICULAR: What, sailing and swordfighting not enough for you? How about the optional stealth missions, strategic land fights and 17th Century Dance Dance Revolution?

Why, you’ll even get a chance to find love with a governor’s daughter in a dancing mini-game, sneak into town in a stealth mini-game and engage in strategic land battles in a chess-like mini-game.

There are many things for a pirate to do, but best of all, the rest of the Caribbean goes about its business as you do so. The four major powers (England, Spain, France and the Dutch) are constantly at war with one another, and you’ll often see shipping routes develop during time of peace and enemy nations raiding each other’s ports. 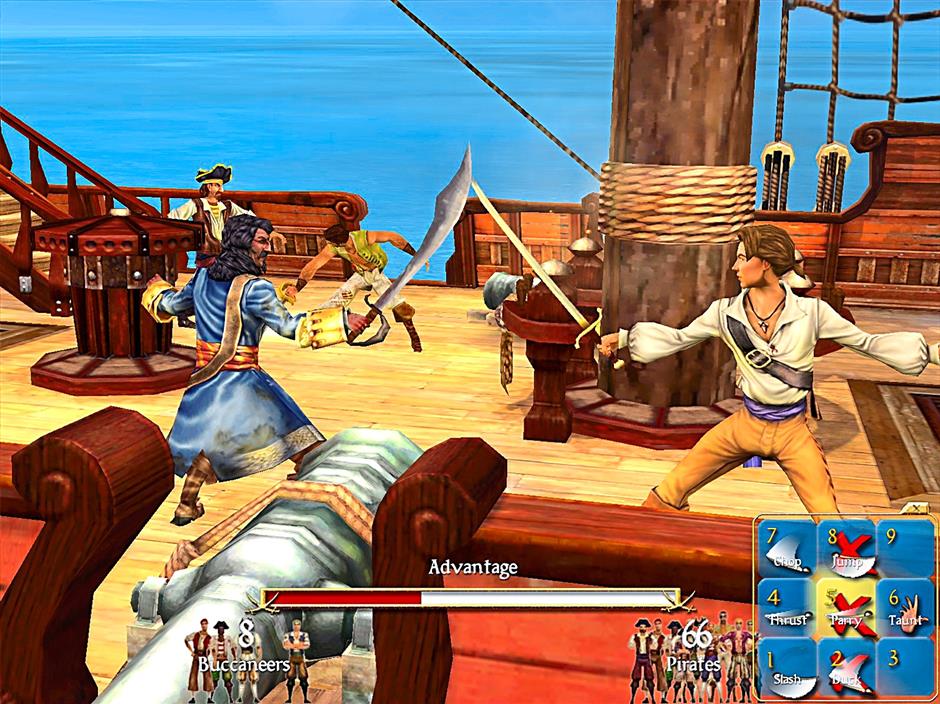 The end result is that, despite the ­cartoonish trappings of the setting and overt mini-games, the game world feels alive and believable. Pirates! really lets you immerse yourself in the fantasy of being a swashbuckler.

All right, there’s a reason for why we’re reviewing Pixel Piracy and Pirates! together. Truth is, both titles are open-world sandbox games with no story and plenty of repetition; it’s just that the latter pulls off the illusion much better.

First, there’s the story: believe it or not, the “missing family” element isn’t really a story; it’s just a goal to aim for. In both games, you can just sail around doing anything you want, but in Pirates!, there’s a main quest that drives you forward after you’re done goofing around. 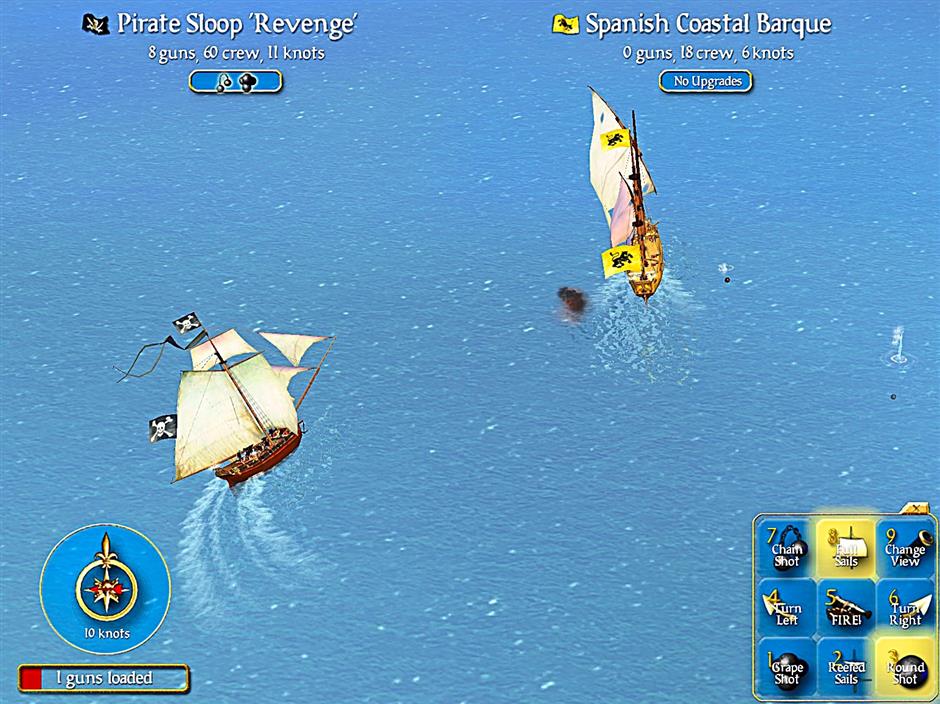 FIRE CANNONS: Ship battles in Pirates! are elegant duels instead of brawls, with an emphasis on careful positioning and calculated cannon fire.

Pixel Piracy is missing an end goal, and that makes the difference between an exciting adventure and a meandering journey.

Second, there’s the repetition: in both games, towns are very similar, with a ­ship-wright here, a tavern there… been there, done that. However, Pirates! adds a few small surprises every time you enter a town — you’ll never know if you’ll come across a shady dealer selling rare treasures, learn about merchant vessels just begging to be plundered, or gain a quest to transport diplomats to another port. KABOOM: Dammit, we said there was to be no smoking in the gunpowder room!

That little bit of randomness does a lot in keeping each playthrough of Pirates! fresh and interesting.

So the lessons here? A game needs a main quest so the players can ignore it; the correct amount of randomness adds a lot of variety to a game; and, finally, any title prepended by Sid Meier’s is probably going to be a quality title, if Pirates! is anything to go by.

So in summary, Pixel Piracy falls short of delivering a decent pirate experience, while Sid Meier’s Pirates! really captures the feeling of being on a pirate-y adventure, yaarrr.

We feel bad for being so hard on Pixel Piracy, because we really admire the ­innovative ideas behind the open-world exploration. However, there are just so many great pirate games out there that we demand a lot from the new ones that come out. 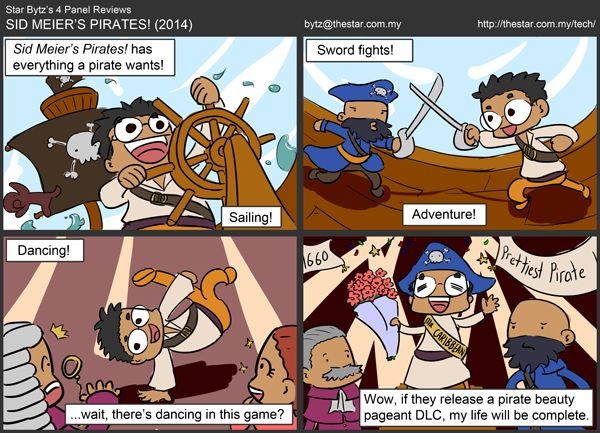 If you want something newer and with better graphics, we heard great things about Assassin’s Creed IV: Black Flag. There are so many choices!

Try any of them and you’ll see that, once you’ve lived the life of a pirate, you’ll be hooked.