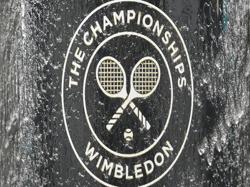 PROFESSOR SNIPE: The hero's name is Karl Fairburne, but we had to look it up

A week ago one of our readers wrote to us asking for our opinions on Rift and Sniper Elite 2. (Hi, Daniel Lim!) Since you asked, Rift is an MMORPG so it’s too time-consuming for us, and Sniper Elite 2 looked promising but we never got around to playing it when it came out two years ago.
That said, we can do one better: Sniper Elite 3 was recently released, and we couldn’t think of a better time to dip into the series.
If we have to guess what this game’s about, we’d say it involves shooting people, but that’s a bit of a long shot.

SP3 puts you in the shoes of a ­(presumably elite) sniper taking out Axis forces during the North African Campaign of World War II.

That sentence is everything you need to know about the story, because the plot is only there to justify putting bullets into bad people. In SP3, gameplay is king, and the king wields a Lee-Enfield Mk III.

PEW PEW: Sniping. What else did you think you'd be doing in this game?

Each mission points you to a general objective (mostly involving sabotage and/or assassinations) but provides you several tools and different paths to approach that goal.

The game has the kind of fun, open-ended level design that lets you get creative in solving problems yet encourages stealth, exploration and planning.

If you’ve played the early Hitman games, you have a good idea of what to expect in SP3.

Of course, as the title implies, sniping is your main problem-solving tool, and the problem is that your enemies are still breathing. SNIPER'S NEST: Here we see the sniper in its natural habitat  an elevated position with a great view.

Plus, as an inverse to most shooters, you’re given a truckload of ammo for your high-powered sniper rifle, but very few bullets for your secondary weapons, which include a dinky silenced pistol and an SMG.

You’re encouraged not to simply jump in guns blazing, but to carefully select your target, take a single shot from afar, then relocate before your foes figure out your position.

It’s a really unique experience that lets you feel like an elite sniper who plans his/her kills, instead of a cartoonish Rambo-esque army hero who simply mows down terrorists in a linear corridor.

Heck, if you want an even more authentic sniper experience, you can even increase the difficulty level so the game ­realistically simulates bullet physics and ballistic ­trajectories.

The experience does enter “wait, what the hell?” territory, though, once you realise that one of the game’s touted features is the highly detailed X-ray kill cam which lets you see your victims’ internal organs explode as your bullets pass through them.

Can you imagine the developers doing research for their X-ray kill cams? “Excuse me doctor, can you share a detailed ­deconstruction of the internal organs of humans? It’s to make our game more ­realistic.” “Oh, a surgeon simulator?” “No, a third-person shooter.”

It’d raise a few alarm bells, is what we’re saying. 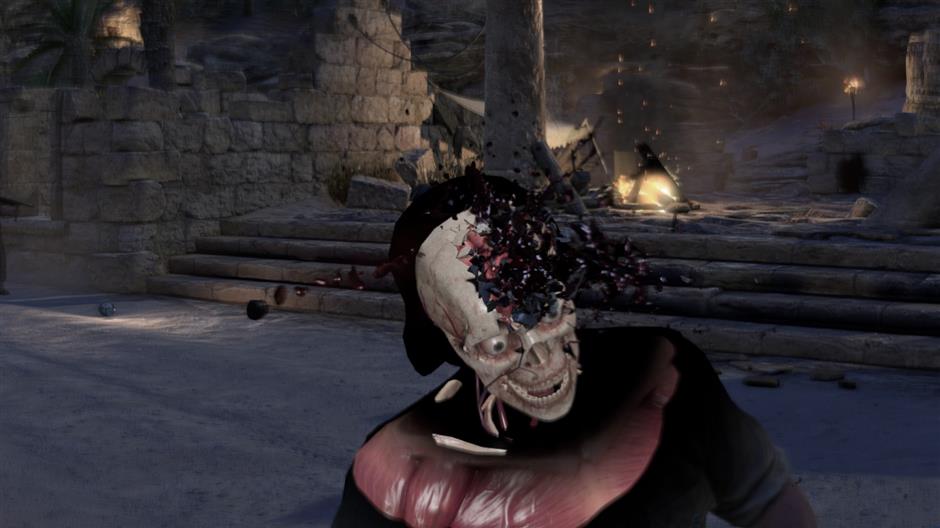 All that said though, do you want to know what’s our opinion of this grittily ­realistic sniping game where you play a lone, ­hardened killer in the grim reality of WWII?

We thought it was hilariously and ­cartoonishly awesome.

To understand our opinion, let’s take a look at an early mission in Gaberoun. We had to assassinate an officer in an Axis camp, so the first thing we did was spend several minutes scouting the area.

We used our binoculars to tag patrolling guards, made note of escape routes should things go south, and silently eliminated some guards who were near a perfect ­sniping vantage point. SSHHH: We hope you're not planning on going anywhere fast, because the main form of locomotion in this game is to sneak around slowly while carrying a silenced pistol.

We patiently waited until our target was in sight, then timed our shot to coincide with the sputtering of a nearby engine so the noise would mask the sound of our fire.

But then we noticed two things that changed the way we played the game. First, killing enemies gave us XP that went to unlocking new weapons and sniper rifle customisations.

Second, while the enemy AI can be pretty smart in reacting to your sniping fire — ­taking cover and working as a team to flush you out of your sniper’s nest — the bots do follow “standard” stealth game logic.

For instance, if they can’t find the sneaky assassin that’s steadily depopulating their camp, they’ll give up and resume patrolling next to the corpses of their comrades. SNIPER VS SNIPER: In a fight between two snipers, the one who sneaks around with a bazooka on his back wins.

After this point, the game turned from a realistic sniping game into a comical and violent game of peek-a-boo. We’d forgo the stealthy, patient and calculated approach in favour of simply ka-blamming every enemy in sight for maximum points.

We’d kill a foe, wait for his ally to come investigate, then shoot him too. When the enemy inevitably spotted us, we’d run away giggling and lead them around a corner where we had prepared half a dozen land mines.

It was like an Elmer Fudd vs Bugs Bunny cartoon, except there were a hundred fascist Fudds and Bugs was an armed psychopath.

To be fair, this is the kind of AI abuse we pull off in nearly every stealth-enabled game. It’s just that the otherwise realistic mechanics of SP3 makes the juxtaposition of videogame logic all that more hilarious.

To the game’s credit, the goofiness and the breaking of “realistic” immersion never detracted from SP3’s experience. It’s just really fun being a badass sniper, whether we played it seriously or comedically.

A lot of this has to do with the well-designed levels that really lets you feel like an independent, intelligent fighter. 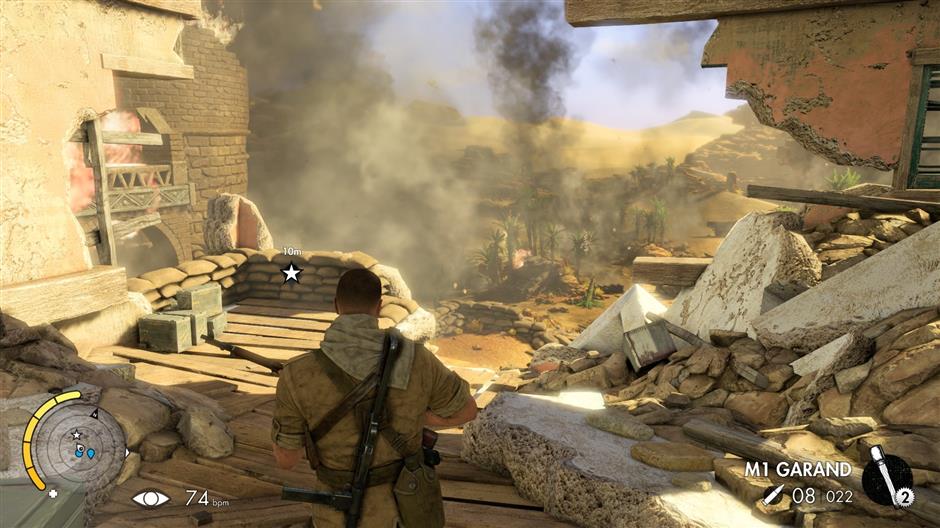 SWEET DESERTS: The desert environments of Sniper Elite 3 are so memorable because they're so refreshingly different from other shooters.

You don’t just react to randomly ­spawning enemies — the cleverly designed environments mean you get to pick the fights you want, when you want, with the tools of your choice.

The maps in SP3 have a lot of character (which is more than we can say of the, er, characters) and that goes for both their mechanical designs and their visual designs.

If you’d take a moment to stop ­aiming at the silly guard who’s leaning on an ­explosive red barrel and just look around, you’d realise that the developers are ­making the most of the North African Campaign ­setting.

The desert environment present in SP3 — from Axis-controlled oases to villages in high, rocky canyons — are such a refreshing change from the modern cityscapes present in so many other shooters.

Why, we would love to live in these places if it weren’t for all those explosive red barrels lying round.

If you’re looking for a really interesting action game, then you really should put Sniper Elite 3 in your sights. We really can’t think of anything bad to say about it.

It provides a unique game experience, it gives you freedom in playing the badass sniper you’d like to be, and, unlike other shooters, it’s a game that rewards planning and patience.

The game gives you plenty of time to practise being patient too, what with its 18GB download on Steam.

Oh hey, we figured out one bad thing to say about this game.