Broken Age: A story for the ages

With two heroes, two worlds and plenty of puzzles to point-and-click your way through, Broken Age is a wonderfully engaging story of growing up and mastering your own destiny.

Point-and-click adventure games have always been a happy marriage of ­kleptomania and OCD (­obsessive–compulsive disorder). You’d go around ­grabbing every item that wasn’t nailed down and then obsessively mash them together with random objects in the scene in the hopes that they will someway, somehow, solve a puzzle.

If you’ve never experienced the joy of doing crazy things like using Root Beer to banish a Ghost Pirate, please go play ­classic gems like Secret of Monkey Island and then come back to this review. It’ll give you context as to why we’re so excited to write this next paragraph.

Tim Schafer — one of the brains behind legendary adventure games such as Monkey Island and Day of the Tentacle — and his studio, Double Fine, have returned to the point-and-click scene with a new title called Broken Age. Whee!

In the fantasy world, there’s Vella Tartine, a young girl in a village full of bakers who’s given the “honour” of being chosen as a sacrificial maiden for a Cthulhu-like god-monster. She quickly realises that this is a bummer of a deal, and soon switches gears from helpless damsel to aspiring monster-killer. VELLA PEACEFUL:At the start of the story, Vella has a nice peaceful life in a peaceful town. Y'know, relatively, for a maiden who's about to be sacrificed to an unspeakable horror.

In the sci-fi world, there’s Shay Volta, a young boy who’s the sole human on a ­computer-controlled spaceship. He yearns for adventure, but is constantly smothered by the pampering over-protectiveness of his robotic guardians, who may in fact be hiding dark secrets from him.

Although worlds apart, our two ­protagonists will find that they’ll walk very similar roads, with each fighting to break out of the roles forced upon them. It’s a very touching story, even if at one point you’ll start talking to an aggravated barfing tree. 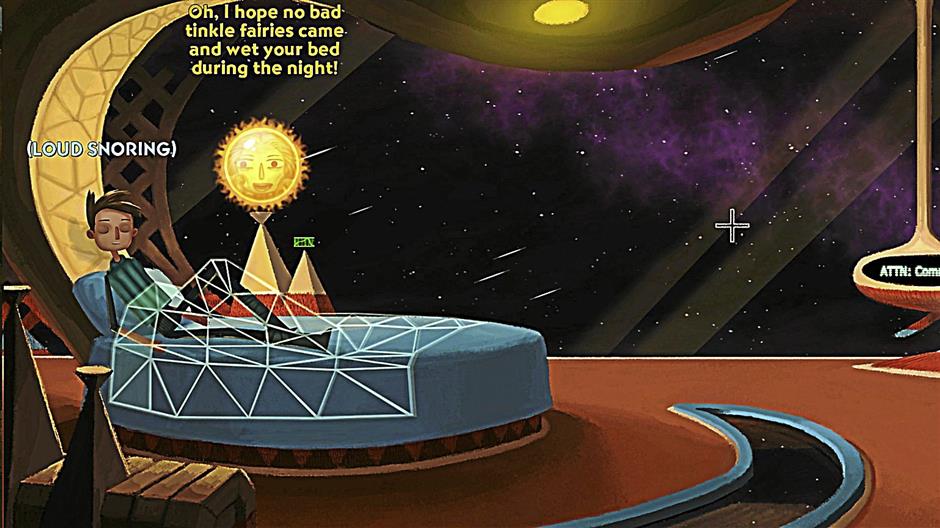 SPAAACE: Shay is the only human on board an advanced spaceship, but has to deal with being treated as a fwagile widdle baby.

Hey, it wouldn’t be much of a point-and-click game if it wasn’t at least a little wacky.

Let’s get the gameplay bits out of the way. Broken Age follows the standard ­convention of point-and-click adventures, albeit its ­puzzles are quite polished given the ­experience behind its design.

Newcomers will find that the game is an excellent introduction to the genre. The puzzles are fairly intuitive and there’s no trace of the genre’s infuriating pixel-­hunting problem. Conversely, veteran pointers and experienced clickers will need to adjust their expectations severely downwards. Despite its pedigree, the game isn’t ­particularly dense with puzzles, and you could finish the game in perhaps three hours. HIS BARK IS WORSE: No, we're not kidding. This game has barfing trees. The game plays this totally straight.

Come to think of it, we never had more than half a dozen items in our inventory at our time, so you can pretty much rule out overly complex multi-step puzzles involving giant robot monkeys or whatever.

The only gimmick Broken Age offers, gameplay-wise, is the ability to switch between Vella and Shay at any point. However, the two cannot interact (unlike the three-heroes-connected-by-a-time-­travelling-toilet insanity of Day Of The Tentacle) so it feels less like a game ­mechanic and more like alt-tabbing between two different adventure games.

In other words, the game mechanics in Broken Age are pretty vanilla-flavoured for point-and-click adventures, but does that mean it’s boring? Heck, not at all.

See, the gameplay’s just a lure to get you started. What’ll really get you hooked, and what’ll really make you want to play Broken Age to its end, is its story.

Given Schafer’s and Double Fine’s well-established brand of wit and humour, we started playing Broken Age thinking it was going to be an all-out comedy. Our assumption was proven wrong, but in a good way.

Broken Age turns out to be children’s ­storybook that’s aimed at an adult audience. It has gorgeous hand-painted graphics and a cast of eccentric characters that make you feel like you’re living in a storybook fantasy world or magical spaceship. 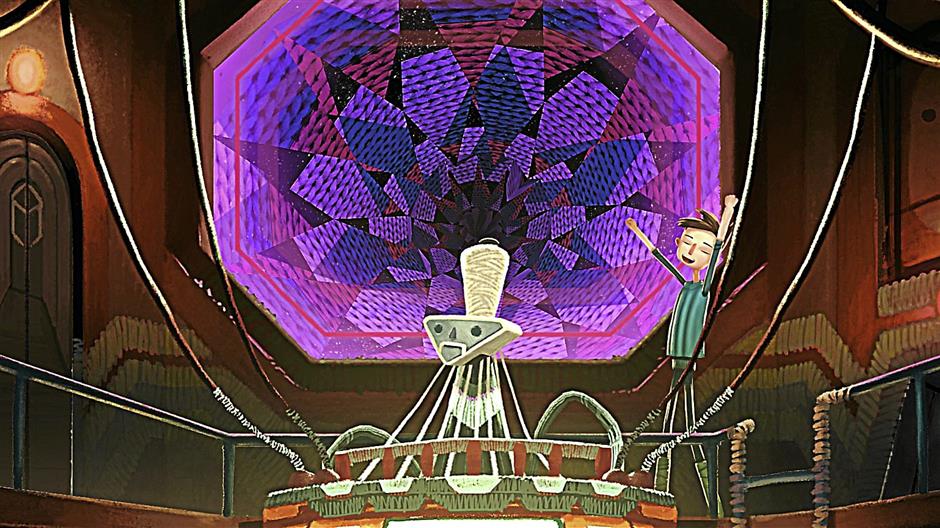 Yet, at the same time, its central message is more timeless and nuanced, working on the theme of growing up and independence. It boils down to a simple moral: Sometimes, you have to decide what’s right for yourself, and sometimes you need to break free of the things that tie you down.

One of our most memorable moments in Broken Age was when we came to the ­horrifying realisation that the society Vella lives in actually celebrates the regular maiden sacrifices. The people Vella holds dear, in fact, actually chide her for not wanting to tart herself up (or cake herself up, to be more precise) so she can be eaten by an unspeakable terror from the dark beyond. HEAD IN THE CLOUDS: Vella's adventures will take her to exotic fantasy locales, including a city built on fluffy clouds.

It really made us invested in Vella as a character, and we really wanted her to ­succeed on her quest to go against her society’s norms and kill an unstoppable god-monster. Folks, this is how you make stories engaging.

The earnestness in which Broken Age tells its story makes the game both beautiful and magical, and we were enthralled with the characters even if said story involves delicious ice cream avalanches, sacrificial maidens dressed in cakes and running around a forest showing off your... stool sample.

We did already mention this amazing game can also be a bit strange, right?

Broken Age is a great title, but ­unfortunately, there’s one important issue that we need to report to you. Consider it a missing puzzle piece.

The bad news is that Broken Age is ­actually broken (ha!) into two parts. Only Act 1 is currently available, so if you buy the game right now, you’ll only be getting half the story. We won’t really know if Double Fine will stick the landing and have a ­satisfying ending until Act 2 is released — as a free update — later this year. The good news, however, is that Act 1 is already worth the price of entry, even if it’s just for the artistic value alone.

The simple, traditional point-and-click gameplay is just the surface layer of this title. What Broken Age truly is, at its core, is an incredibly engaging tale that’s full of heart and adventure.

Folks, this one is poised to be a story for the ages.

Cons: Waiting for Act 2 to be released.