The virtual battlegrounds of Battlefield 4 beckon veterans back to the online theatre of war.

IT IS that time of the year again — it’s just before the holidays, which means the military shooters are out in full force.

The two contenders for the top spot, EA’s Battlefield 4 and Activision’s Call of Duty: Ghosts are in a tight battle for our hearts and wallets.

To be frank, Battlefield’s single player campaign has never been its strongest suit. They lack the boombastic scale and over-the-top action of the Call of Duty series.

That doesn’t stop EA from trying though as it carves out a conflict set in the near future where three major superpowers — the United States, Russia and China — are gearing for all out war.

This provides the backdrop for the your team, Tombstone, a company made up of a motley crew of marines. You play as a soldier named Recker, a silent protagonist whom we assume is the poster boy of the Battlefield 4 cover.

It is really odd to see how people interact with your character, who seems to have as much personality as a black hole.

Everybody seems to be totally fine talking to you without expecting any response. It is as if it is perfectly normal talking to a mute soldier who also happens to be the commanding officer of the unit.

The story, told in seven acts, definitely plays along to the standard six to seven hour play time we are used to.

It is all formulaic and ­predictable with high octane action, plenty of explosions and destructible environments.

You will fight your way through abandoned school buildings, drive a jeep while being chased by an attack ­helicopter and participate in a high stakes shootout on top of a Shanghai skyscraper.

Though it looks great, we can’t help but feel that the ­campaign just feels like a ­glorified tech demo that walks you through beautifully rendered ­environments that has a mediocre shooting game built on top. 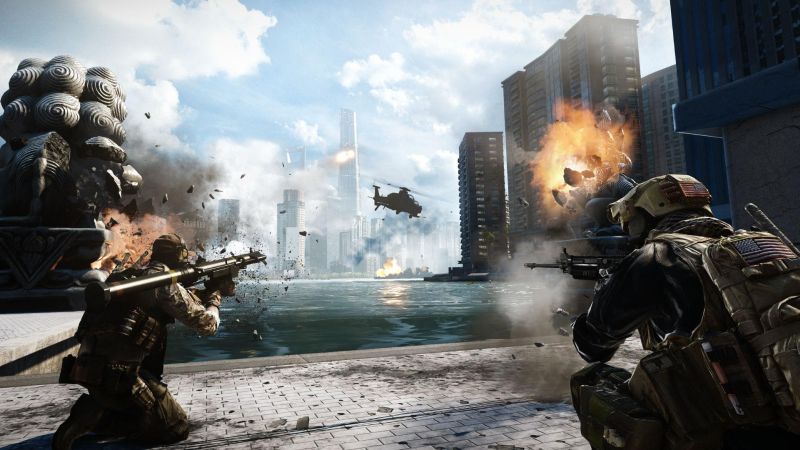 Take that chopper down: Engineers, armed with rocket launchers, are the backbone of your vehicle fighting force and will put a stop to vehicles rushing in.

Let’s forget for a moment about the single player ­campaign: Battlefield 4’s ­multiplayer is where the main game is at.

More evolutionary than ­revolutionary, Battlefield 4 refines and tweaks the formula but does not completely overhaul it.

Just like before, there are four character classes to choose from: assault, engineer, support and recon.

This time around there are more customisation options to choose from and you can spend a fair amount of time tweaking your weapons and gadgets before setting off for the next battle.

Most weapons are locked at first, so you will need to play more to unlock new weapons and gear. It certainly hooks you as you are compelled to stick around and see what new toys you can use.

The game ships with 10 expansive multiplayer maps. The designs are fantastically detailed and well designed to ­accommodate massive battles by land, sea and air.

Levels have a sense of ­verticality to them with lifts, ladders and stairs that let you get a better vantage point and hopefully rain death down upon your foes.

PC, as well as PS4, players will get to fight it out in colossal 64 player matches while previous generation console players will duke it out in smaller 24 player skirmishes.

All the classic Battlefield modes like Conquest and Domination are accounted for, plus a couple of new ones like Obliteration mode, where two teams fight for control of a bomb and use it to blow up three enemy ­positions.

The destructible ­environments are back of course, as are all the various vehicles that you can use to level buildings.

Battlefield 4 takes the level of destruction up a notch as there are special events called Levolutions that can radically change the landscape of a map.

Take for example Flood Zone, a small block of buildings and a highway that is situated next to a dam. Players can destroy the dam and radically change the map by completely flooding the ground level.

This then forces players to take to the roofs and rely on boats to navigate around the map quickly or risk getting gunned down while swimming.

The graphics in the multiplayer mode still look remarkably sharp despite the large number of players on the field. In fact it looks almost as good as that of the single player game.

There is an abundance of servers to find online to cater to your needs.

The initial issues that plagued the game during launch seem to have been sorted out by EA and the experience thus far has been smooth as of this writing.

Battlefield 4 is a mixed bag thanks to its weak single player mode, but it is balanced by the excellent multiplayer mode.

Regardless of which platform you are playing it on, the game looks gorgeous though the PC version takes the cake for the best visuals.

The single player campaign tries its best to engage players with action packed sequences, but it really falls flat and seems nothing more than a sideshow to the excellent multiplayer mode.

Big destructible ­environments, plenty of customisation options and most importantly, an ­awesome array of vehicles are some of the reasons that die hard Battlefield fans will enjoy the game for months on end.